INCLINE VILLAGE – Under skies as clear as the near shore, nearly 700 people gathered Monday at Sand Harbor for what was essentially a bipartisan rally to keep protecting Lake Tahoe.

Former Vice President Al Gore returned to the Lake Tahoe Environmental Summit after having launched the initial one in 1997 with then President Bill Clinton. 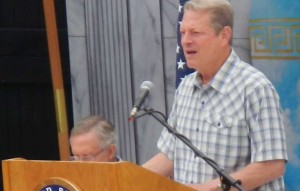 While speaker after speaker touted how the lake is clearer – having improved 11 feet since the first summit – what was not addressed was the near shore. Much of Tahoe’s shoreline is murky. And the smoke in the air from the American Fire that is 30 miles away was adding to the degradation as particles filtered down.

Sudeep Chandra, professor at UNR, was on Capitol Public Radio the morning of the summit. He spoke of how clarity is measured in the middle of the lake, not at the water’s edge.

He told CPR the health of the near shore has declined dramatically in the last 15 years.

“We are also talking about the dramatic loss of biodiversity at the bottom of the lake,” Chandra told CPR. “It could be an early warning sign for the overall health of the lake.”

He added, “We don’t have good monitoring for the near shore.”

Chandra told the radio station there has been a 72 percent decline of all native species on the bottom of Lake Tahoe. Reasons are related to climate change, less light coming through and more invasive species in the lake.

Climate and biological related projects are planned to get a better handle on the near shore problems.

He and others believe climate change is here to stay. And Gore believes it can be stopped.

“Today we will put 90 million tons of global warming pollution into the atmosphere as though it’s an open sewer,” Gore told the audience of nearly 700. (Usually a couple hundred people attend these summits.) “Here in Lake Tahoe an increase in air temperature means more precipitation that falls as rain and not snow. Snowsports are threatened. Ski resorts all over the world are threatened.”

He noted that the centerpiece of Lake Tahoe’s economy is tourism and that without snow and a pristine lake, that economy evaporates along with the snow and clarity.

Scientists predict the air temperature in the basin could increase by as much as 10 degrees in this century.

Gore said as temps increase in the West the number of wildfires will dramatically rise.

“Eleven states are fighting 35 gigantic fires as we meet here today,” he said.

While Gore said Tahoe should invite the world for a summit to show what it is doing, he never offered solutions for global warming. Nor did anyone else.

What the senators and governors from California and Nevada all pledged was to work together and keep spending money for the sake of Lake Tahoe. Nearly $2 billion has been spent in 15 years on projects to improve Lake Tahoe’s clarity, with another $415 million sought through the Lake Tahoe Restoration Act.