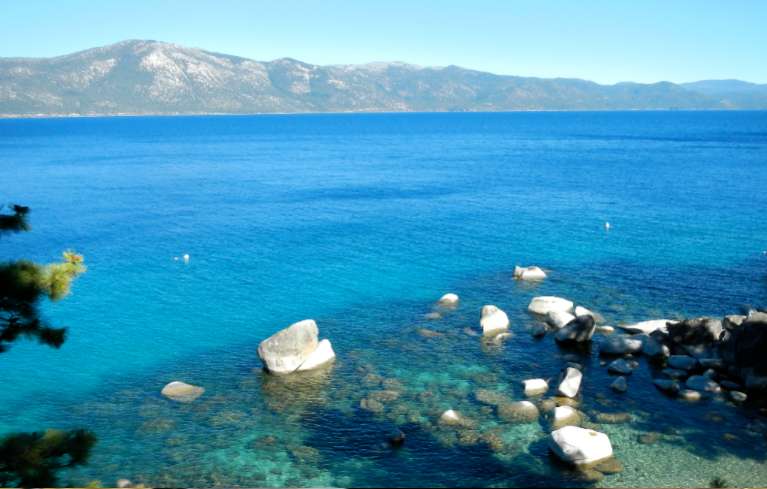 While Lake Tahoe’s clarity improved for the second straight year, no one is ready to throw a victory party.

“The data shown reveal a unique record of trends and patterns – the result of natural forces and human actions that operate at time scales ranging from minutes to decades. These patterns make clear that Lake Tahoe is a complex ecosystem, behaving in ways we don’t always expect. This was exemplified this year by the decrease in the abundance of (the algae) Cyclotella in the lake, and the corresponding increase in summer clarity,” Geoff Schladow, director of UC Davis Tahoe Environmental Research Center in Incline Village said in the Tahoe: State of the Lake Report 2013 that was released today. “While Lake Tahoe is unique, the forces and processes that shape it are the same as those acting in all natural ecosystems. As such, Lake Tahoe is an analog for other systems both in the western U.S. and worldwide.”

Schladow will be talking tonight at 6 at Sierra Nevada College about the report and lake clarity.

Jeff Cowen with the Tahoe Regional Planning Agency said the results of the report confirm a lot of trends the bi-state regulatory has known about.

“It underscores the approaches we have established,” Cowen told Lake Tahoe News.

Scientists attribute the improvement to:

• 2012 being dry year in the basin. This means less runoff carrying sediment reaching the lake.

• Reduced numbers of tiny Cyclotella algae. An abundance of the microscopic algae over the past five years has been linked to climate change and coincided with reduced summertime clarity.

Since 1968 a Secchi disc – which resembles a white dinner plate – has been used to measure the clarity. That year the disc could be seen at depth of 102.4 feet. People stand on a boat, look in the water and decide how far down they can see the disc.

Schladow said this report is the first to use “other environmental and water quality factors that all provide indicators of the lake’s condition.”

Some of the new tools include an underwater glider that was in the lake for 11 days in May. It provided the first “snapshots” of water quality across an east-west transect. The data confirmed the presence of giant “internal waves” deep in the lake that could move algae and pollutants vertically over 150 feet.

A water-quality monitoring station was placed at a depth of 360 feet off the West Shore that provides data from top to bottom every 30 seconds. This is the first such station in any lake in the world and is expected to provide a better understanding of climate change impacts on Lake Tahoe.

Climate change is a growing concern for Lake Tahoe. The annual average surface temperature was 52.8 degrees, the highest ever recorded for Lake Tahoe.

The lake dropped a foot in 2012 because of the lack of snowfall.

The report says, “In a dry year lake Tahoe typically loses 1.5 feet of water level. Predictions of future climate conditions in the basin point to more extreme events in the future. A five-year drought could conceivably reduce the lake level to 6215.5 feet, or 5 feet below the record 1992 levels.”

Air temperatures are also increasing in the Lake Tahoe Basin. This in turn will mean more rain and less snow. All of this will affect lake clarity, too.

“Although the date on which peak snowmelt occurs varies from year to year, since 1961 it has shifted earlier an average of two weeks (16.3 days). This shift is statistically significant and is one effect of climate change on Lake Tahoe. In 2012, peak discharge was one of the earliest recorded, occurring around May 4,” the report says. “Peak snowmelt is defined as the date when daily stream flows reach their yearly maximum. Daily stream flows increase throughout spring as the snow melts because of rising air temperatures, increasing solar radiation and longer days. The data here are based on the average from the Upper Truckee River, Trout Creek, Blackwood Creek, Ward Creek, and Third Creek.”

While most of the attention in the past half-century has been focused on the disc in the middle of the lake, it’s the gunk growing along the shoreline that has the average resident and tourist concerned. This is what scientists call the near shore.

“Periphyton, or attached algae, makes rocks around the shoreline of Lake Tahoe green and slimy, or sometimes like a very plush white carpet. Periphyton is measured eight times each year. In 2012, concentrations at Sugar Pine Pt. (no urban influence) and Zephyr Pt. (low urban influence) were below the long-term average. The site with the most periphyton (Pineland) is close to an urban area, and was relatively high this year,” the report says. “The Tahoe City value was about average for that site. To date, no statistically significant long-term trend in maximum periphyton biomass has been detected at any of these individual locations. Monitoring periphyton is an important indicator of near-shore health.”

Here is the full 2013 State of the Lake report.