The Museum of Sierra Ski History and 1960 Winter Olympics will open May 25. 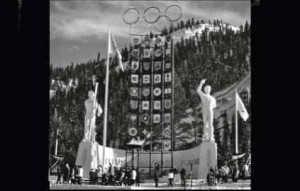 Walt Disney’s artistic centerpiece of the Olympic Park was the elevated stage of the Tribune of Honor. It was backed by an 80-foot tall Tower of Nations displaying the crests of the 30 participating nations and flanked by statues of athletes in the style of snow sculptures. Photo/Bill Briner

Selections from the photographic collection of official Olympic photographer Bill Briner will be a central feature. Dozens of never before exhibited banners, souvenirs and spectator memorabilia from the Batiste Family Collection will be on display. The collection includes items from the pre-Olympic days of Squaw Valley Ski Area.

The exhibits will eventually include tributes to current and past Tahoe-area Winter Olympians and prominent skiers.

Channel Properties, owner of the Boatworks Mall, is hosting the museum as a public benefit and at no cost to the exhibitors.

The museum will be open from 10am-6pm on the second floor of the Boatworks Mall, 760 North Lake Blvd., Tahoe City. A grand opening ceremony is planned for early summer 2013.

Admission is free, with donations accepted.