Skiers in colorado know that the weather in vail can differ wildly from that of Beaver Creek, just 13 miles west on Interstate 70. The National Weather Service may forecast snow for the Rockies, but the amount in ski areas can vary by an entire foot; it’s tricky to gauge where and when the most snow will fall. 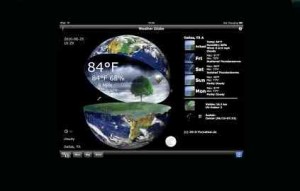 How does he know? About five years ago, Gratz began to analyze microclimates in the Rockies — which are influenced by widely variable topography and wind flows–and e-mail his friends with predictions on where the most snow would fall so they could plan accordingly.

Those powder-pinpointing emails became so popular that Gratz eventually ditched his day job consulting for an insurance company to start OpenSnow.com It’s one of a number of travel weather sites such as BestSnow.net BestSkiWeather.com and SnowForecast.com that are aimed at skiers and snowboarders on the move.

This burgeoning category of sites not only serves skiers but is also a boon for surf, trail, rod and gun travelers, especially those who don’t book far in advance. With a five-day window, travelers can point themselves toward optimal conditions for golf, tennis, fishing or hunting. Lodges and resorts benefit too, emailing powder alerts, for example, to attract last-minute bookings.

Surfers were first to take weather into their own hands.

“They were their own meteorologists,” says Jens Rasmussen, a co-founder of Solspot.com a wave and weather site.

By retrieving data from ocean buoys and weather satellites, surfing-centered sites such as SurfLine.com MagicSeaweed.com BeachLive.com and Solspot create algorithms to alert riders when an epic swell is due at, for example, Cortes Bank off the California coast or Jaws in Maui, Hawaii. (The surf sites have awesome videos too.)

Your average weather site probably wouldn’t forecast the scent cone — the area downwind from hunters that might give them away to their prey. ScoutLookWeather.com does.

“ScoutLook’s mission is to tell them precisely where, when and how to maximize that time afield by being in the right place at the right time,” says Cy Weichert, a co-founder of the site.

ScoutLook includes sponsored apps that allow fishers to photograph their catch and upload it; the site also records location and weather conditions for future reference — “say, how many lake trout have I caught in northwest wind on a fly,” Weichert says.

Right now, he’s focused on developing more-detailed apps for the hunting and fishing markets in the next year.

Golfers too are getting focused weather. GolfWeatherNow.com also run by Rasmussen, says it has forecasts for 6,247 courses in the U.S., plus information on course conditions and amenities. Meanwhile, the U.K.’s Advanced Weather Applications is trying to flood the zone with information for a variety of sports on sites like LatestGolfWeather.com plus ones for hiking, motor sports and other activities around the world. Rasmussen plans a similarly comprehensive mountain-to-ocean approach, as does ScoutLook.

Only problem with all these sites: if you don’t catch the best waves or the biggest fish, you can’t blame the weather.