In October, Google joined other big online marketplaces including eBay, Craigslist and Amazon.com in banning weapons listings on its revamped shopping site. The move, which the company said was in keeping with its advertising policy, predated the Newtown, Conn., school massacre by about two months. Yet there is no evidence that Google’s action has curbed online gun sales.

That’s because sellers, incensed by the prohibition on gun listings, are finding new outlets for their wares. Cory Brown, a sporting goods merchant who runs several e-commerce sites in Rockville, Md., estimates that Google once helped drive 80 percent of the roughly $5 million in annual sales of ammunition, shooting accessories and outdoor equipment at one of his online stores. 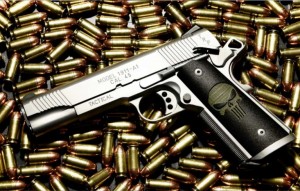 Rather than just complain to the search giant, he started FreeGunShow.com in December, an online classified ad service for guns and other gear. “I was like, look, I’m tired of these companies, whatever (their) motivations, prohibiting the sale of things that are legal,” Brown said. “When Google pulled the plug on this kind of stuff, I knew something bad was happening.” Another firearms marketplace, GunCycle.com, based in Princeton, Kan., is scheduled to go online this week.

In 2000, when the U.S. Department of Justice last did an official tally, there were about 80 online firearms auction sites and approximately 4,000 other sites offering guns for sale in the country. Today, as the national gun control debate intensifies in the wake of the Newtown tragedy, it’s a safe bet that gun buyers have even more online options.

Bureau of Alcohol, Tobacco, Firearms and Explosives spokeswoman Ginger Colbrun says the federal agency is aware that there’s been a boom in gun buying sites. Federal gun safety proposals circulating in Washington that would tighten background checks might take a bite out of sales if passed by Congress. Yet none are intended to put these digital weapons bazaars out of business.

New sites like Brown’s and older ones such as GunBroker.com and Armslist function as marketplaces for buyers and sellers and make money through advertising or transaction charges. GunBroker.com, which bills itself as the world’s largest gun auction site, has brokered more than $2 billion in sales since its founding in 1999, according to the site.

Online sales anger gun control advocates because shoppers can use them to exploit a long-standing loophole in federal law that allows unlicensed private gun sellers to skip background checks on prospective buyers in their home state. Also, while it’s a felony to sell a firearm knowingly to an individual who would not pass a background check because of a criminal record or history of mental illness, many private sellers flout that rule.

Bob Ralph shuttered Express Police Supply, a brick-and-mortar store in Lenexa, Kan., that sold Smith & Wesson’s M&P 15 semiautomatic rifles and Glock’s 22 handguns, in 2011. Now he’s gearing up for GunCycle.com. Ralph acknowledges that a private collector who auctioned a gun through his site could meet the buyer in a parking lot and hand over the weapon without a background check. “There would be no way for me to stop that or preclude that,” he said. “And it would be legal for them to do it that way.”

An undercover investigation by New York City of private firearms sales online in 2011 showed 62 percent of sellers agreed to sell a firearm to investigators posing as buyers who indicated they probably couldn’t pass a background check.

“Buyers can buy and sellers can sell in almost complete anonymity. So if you’re looking to avoid being seen – a paper trail or legal scrutiny – you’re going to turn (to Internet sites) first,” said Mark Glaze, director of Mayors Against Illegal Guns. The group, which includes more than 850 U.S. mayors, was co-founded by New York City Mayor Michael Bloomberg.

Gun control advocates are trying to halt the proliferation of online marketplaces for firearms. Two days before the Dec. 14 Connecticut school shooting, Armslist was sued by relatives of a woman who was murdered in suburban Chicago in 2011 by a man who shot her with a weapon advertised on the site.

The wrongful-death lawsuit, the first against an online weapons seller, was launched by the Brady Center to Prevent Gun Violence on behalf of Jitka Vesel’s family. Armslist didn’t respond to requests for comment sent via its website; a telephone number wasn’t available.

Others in the same line of business have not been cowed. “This lawsuit will die. You cannot sue a third party in this case. Been proven over and over in case law,” Cory Brown wrote in an e-mail. He says his 2-month-old site has more than 1,000 registered users and would be doing even better if he had more merchandise. “A lot of our sellers own stores and inventory right now is real hard to get,” he wrote in another email. “Anytime we see an in-demand gun come up, it doesn’t last long.”