The South Lake Tahoe City Council is ready to fight.

“I believe our rules have purpose and when they are broken knowingly, we should not settle,” Councilwoman Brooke Laine said.

The four met Feb. 11 to continue last week’s discussion of whether to take the City Attorney’s Office recommendation to settle the dispute over the property at 1348 Wildwood Ave. or let the court decide. It was a 4-0 vote to litigate. (Councilman Hal Cole recused himself because he owns property in the vicinity.) 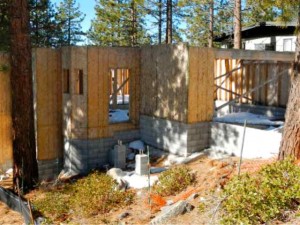 South Lake Tahoe is going to court to make the owner of the parcel at 1348 Wildwood Ave. adhere to the easement tied to the property. Photo/LTN

Councilwoman Angela Swanson said she could not reward someone who started construction knowing there was an easement on the property precluding such action.

Today the parcel has a foundation poured, and plywood up with openings for a garage, front door and windows. The court will decide if a full house is erected or if it returns to open space like the U.S. Forest Service lot next door.

A case management meeting will likely take place in March, with a trial beginning six months to a year from now.

Attorney Paul Gumina spoke on behalf of his client Thang Vu. Vu and his now ex-wife Jennifer Khuu bought the property in 2002, were issued a building permit in 2007, had that revoked in 2008 when the easement blocking the building surfaced, and sued the city in 2009. Khuu now owns the property, but Vu based on court records, is the plaintiff, according to Gumina.

“They knew they could not build on the lot,” Gumina told the council Tuesday morning. “Then they embarked on the long process to turn it from unbuildable to buildable.”

They did this, in their belief, by securing a building allocation and building permit. But the easement restricting developing the parcel was never altered. While Gumina told the council Vu had the allocation from the Tahoe Regional Planning Agency before obtaining the building permit, the opposite is what happened.

In addition to that, Vu and Khuu falsified their application to the city, as noted at the meeting by City Attorney Patrick Enright.

“On the building application it says there are no restrictions,” Enright said, in reference to what the applicants wrote.

But Gumina had already admitted to the council that his client was well aware of the easement.