STATELINE – Wiping the slate clean. That was one of the overriding messages the Tahoe Transportation District staff and board wanted people on all sides of the loop road to hear and embrace.

That doesn’t mean the proposed reroute of Highway 50 through the South Shore that has caused so much consternation has gone away. What is means is more ideas will be studied in addition to what was originally on the table.

While a loop road has been talked about since the 1980s, this is one of the few times it has gotten this far in the planning process. 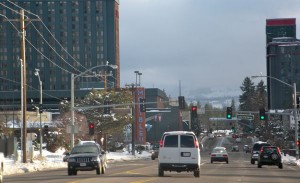 A goal of a loop road -- wherever it goes -- is to make the route through the Stateline casinos a city street so the area would be more pedestrian friendly. Photo/LTN file

Better communication with the public is also a main objective as plans go forward. So many people believed decisions were being made without public input – especially the property owners who would be relocated.

To help move things forward the TTD board on Sept. 14 approved $810,828 for public planning process facilitation, preliminary engineering and design, environmental studies, and economic analysis. This brings the contract with Wood Rodgers to $2,810,828.

TTD Executive Director Carl Hasty said the additional money is available through grants. And he said, “The dollar amount reflects a worst case.” In other words, it could cost less to do the work.

Board member Norma Santiago, who represents El Dorado County, asked how the economic analysis is different from what has been done with the South Shore Vision Plan.

Hasty explained the vision plan economic study covers a larger geographic area and the study TTD has done just involved road analysis. The new study will look at the impact – good and/or bad – on businesses if the loop road were to be put in.

LSA Associates will be responsible for the environmental studies. Economic Planning System Inc. will do the economic study. Wood Rodgers will do the public outreach, preliminary engineering and technical studies.

Hasty noted the South Lake Tahoe City Council wants part of the outreach to include a public workshop that the city would televise.

TTD is the lead agency, but all the residents, housing and businesses that would need to be relocated or go by the wayside are in South Lake Tahoe. Previous city councils have agreed not to use eminent domain again. It would take a four-fifths vote to change that policy. But if all the property owners agree to sell and Caltrans signs off on the project, the city would not have much, if any, power to stop to project from going forward.

On the Sept. 18 City Council meeting is an item about the loop road.

Councilwoman Angela Swanson, who is the city’s rep on the TTD board, said with the council on Tuesday discussing the loop road, Tahoe Regional Planning Agency Regional Plan update, and whether to pursue the Tahoe Valley or Stateline plan, that clarity should emerge as to what the city envisions for the future. Swanson said it is her belief the council will pick the Stateline plan to pursue first, but acknowledged it still requires a vote.

Councilmen Bruce Grego, who is the city’s alternate on the TTD board, and Hal Cole were in the audience. It is unusual for councilmembers to attend meetings like this where one of their colleagues is on the board.

Grego was one of the six members of the public who spoke Friday morning. He is concerned public perception will be that the slate isn’t really wiped clean because the contentious route is still on the table.

It’s on the table so it can be thoroughly vetted – as in beyond the public emotion meter.

Hasty made it clear no additional alternatives have been worked on to date – but they will be going forward. Getting the board to approve the allocation of money and having an outreach plan were the priorities of the past few months.