HOPE VALLEY – Tree trunks stand like centurions from an era long ago. It’s as though they are keeping secrets – possibly the stories of explorers from another century.

With each day that passes, the water level at Scotts Lake is receding. At an elevation 8,012, the conditions look more like spreading drought conditions at sea level than an alpine lake.

The edge of the lake is muddy, with cracks in it where it has dried. Grasses that are normally under water almost don’t look real. The tree trunks that are showing are well below the high water mark. 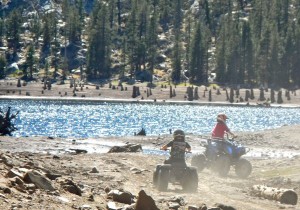 A pipe almost blends in with the rocks. Presumably this would take water to the west fork of the Carson River.

Balls of lichen grow on downed wood and are stuck to the mud. They look like loofa sponges. We don’t touch them.

Friends come here to fish. It doesn’t look like much of a fishing spot – at least not on this September Saturday. And the road there isn’t one I would have wanted to drive with trailer in tow.

There are two main ways into Scotts Lake. One is to hike in from the Big Meadow trailhead off Luther Pass. We met a few people at the lake who did this.

It was Frank Riley’s description in “Tahoe Blues” about hiking to Scotts Lake and his encounter with a bear that made me want to know where it was. It’s in Alpine County on the edge of El Dorado County. Waterhouse Peak is nearby.

We opted for the route that involved a lot less work.

We drove in. The Jeep needed to get some 4-wheel drive action other than when white stuff is on the ground. It’s not a particularly challenging route, but at one spot on an offshoot from the main trail to the lake Sue thought she and AJ should get out of the vehicle.

The topo map describes this as a dirt road or bike path, possible 4-wheel drive needed. I would not take my bike up this road.

We are not the only ones who opted to use gas-powered means to get to our destination. Campers who are in RVs close to Highway 88 are playing on their four-wheelers.

They move on and we have the lake to ourselves. It’s quiet, desolate and tranquil as the sunlight shimmers on the lake. A gentle breeze sends little ripples toward the shore.

A few aspens are turning yellow. Fall is definitely in the air.

From South Lake Tahoe, go west on Highway 50. Turn left onto Highway 89. Go until it dead-ends in Hope Valley. Turn right onto Highway 88. Make a right onto an unnamed road that has a cattle guard. (If you hit Blue Lakes Road, you went too far.) Veer to the right. Keep veering to the right and then start the climb.