Could you throw a smoldering ember the size of a softball anywhere in your yard and walk away feeling confident that it will not start a fire? If not, then it may be time to work on your defensible space.

Practically an everyday term now, defensible space was not mentioned much in the Lake Tahoe Basin before the Angora Fire ravaged the South Shore in 2007.

Coined in the 1980s, the term defensible space refers to the area of vegetation and landscape management between a house and a potential oncoming wildfire. And not only is it a good idea, it’s the law.

“A person who owns, leases, controls, operates, or maintains a building or structure in, upon, or adjoining a mountainous area, forest-covered lands, brush-covered lands, grass-covered lands, or land that is covered with flammable material, shall at all times do all of the following: (1) Maintain defensible space of 100 feet from each side and from the front and rear of the structure…”

Even though your property may not back to open forest land, the law still applies. Nearly all of the Lake Tahoe Basin is located within what is known as a wildland urban isnterface, or an area where civilization meets and intermingles with the wilderness.

Nevadans are not off the hook, either. Legislation and building codes require Nevada properties to have defensible space as well. 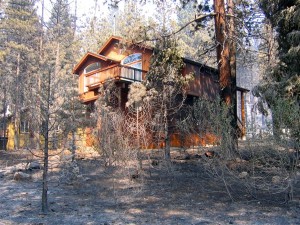 Some of the regulations have been altered since the Angora Fire, but they are far from new. Lake Valley Fire Protection District was enforcing defensible space requirements before signing occupancy permits for years prior to the fire.

Defensible space is not just for new and remodeled homes, either. It applies to all structures, residential or commercial, within the WUI zone. Owners can even be fined for non-compliance.

Fire Chief Gareth Harris of LVFPD said that all of the homes in the Angora burn zone had been contacted by defensible space technicians at least twice prior to the fire. Of those that did complete their defensible space, 75 percent survived.

So why were some owners reluctant to comply? Well, for a variety of reasons, including financial ones and difficulties with the TRPA. But after losing 254 houses to the Angora blaze, area fire districts and the Tahoe Regional Planning Agency agreed things had to change.

Together, the groups streamlined the defensible space process, and the TRPA loosened its grip a little on tree removal and erosion standards. Now defensible space inspectors from the fire districts can authorize tree cutting for fire safety, and property owners can remove pine needles from within 30 feet of structures once a year.

“I don’t think it’s a choice of a clear lake or a safe community,” said Peter Brumis, public outreach specialist for the Tahoe Resource Conservation District.

The group focuses on erosion control and protecting lake clarity, forests and wildlife. Brumis admits there is a delicate balance when it comes to the issues of erosion control and defensible space, but maintains that one is no more important than the other. In most cases, he said, both can be done effectively and simultaneously.

The financial burden of defensible space was also addressed. The Nevada Fire Safe Council was able to secure grants and offered up a rebate program starting in 2008. Property owners could recoup half of their costs to install defensible space up to $1,000. Unfortunately, the entity lost its grant funding for 2012 and closed its doors at the end of April.

Making the permitting and financial aspects less burdensome may have contributed to the sharp spike in defensible space compliance immediately after the Angora Fire, but Forest Schafer, forester for the North Lake Tahoe Fire Protection District, thinks it was more than that.

The NLTFPD did 163 defensible space evaluations in 2006. In 2008, the year after the Angora blaze, that number jumped to 410, but has been steadily declining ever since.

“I think the Angora Fire was a very stark reminder of how important it is to do that,” he said. “It’s not in the front of everyone’s mind when smoke’s not in the air.”

NLTFPD, like LVFPD, the South Lake Tahoe Fire Department, and other fire districts around the lake, offers free defensible space inspections and evaluations. Experts will visit the property, make recommendations, mark trees for removal and even advise owners on the best types of vegetation to include in their fire safe zones.

The resources are available, and the effectiveness of defensible space has been proven time and again. But when it comes to wildfire, there are no guarantees. Even with the best landscape management, an ember that lands directly on a wood deck or shake roof can mean the end. So while defensible space is a good start, fire safety does not stop at the front door.