By the last day of the month, three of South Tahoe High School’s tennis courts are expected to be playable. The other three will be ready for action by mid-October.

With the building at the school and limited space to put heavy equipment, the courts became a parking lot and staging area for construction crews. In turn, the courts were destroyed. But they weren’t in good condition to begin with – with dangerous gaps in the playing surface. 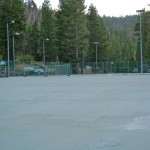 New will be all six having lights. In the past, only half had been lighted.

“Those will be open to the public, just like at the middle school,” Jim Tarwater, superintendent of Lake Tahoe Unified School District, told Lake Tahoe News.

Rumors were going around town that the courts would be limited to high school teams and people who rented the facility, with the public locked out. Tarwater promised that is not the case.

About $350,000 is being spent on the courts through the facilities bond.

In the not too distant future, Tarwater would like to form a partnership with the city and Lake Tahoe Community College to renovate the four courts at South Tahoe Middle School.

He would also like to create two more courts near the middle school and St. Theresa School.

“Tennis is big in South Lake Tahoe. I could see tournaments coming up here,” Tarwater said. “My dream would be to cover the six at the high school.”

This way tennis could be played year-round on the South Shore. The only indoor court is at Ridge Tahoe. Owning a time-share or staying as a guest are requirements of using that court.