STATELINE — Before calling Tahoe home, some of us spent the night in cars or a $20/night hotel room because we only had enough money for a lift ticket.

Food Network star and restaurant owner Guy Fieri is no different – except that he is still contemplating calling the South Shore home. Living here half the year is his goal. 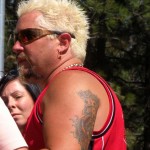 Growing up in Humboldt County’s Ferndale, this popular chef spent many winters trekking to Tahoe to ski at Squaw. He remembers one three-night stretch in his Datsun 280Z in a parking lot across from Heavenly.

“I love Tahoe. I have great memories as a kid skiing here,” Fieri told this reporter while he took a break from adding to the rowdiness of Hole 17 at last year’s American Century Celebrity Golf Tournament.

With Fieri’s trademark spiky bleach blond hair, armful of tattoos and his buddies’ tough-guy appearance, one would think these bad boys would be a little edgy. I’m sure it’s not the Jack and Coke they supplied this writer with that convinced her they are harmless and truly giving.

Dirty P. is Fieri’s left-hand guy, while Kletus is his right-hand dude – they are distinguishable by which arm their tattoos are on. They are part of the traveling Food Network gang, or as they say, the culinary ganstas.

Dirty P. said Fieri, who is married and has two kids, is all about giving back whenever he can. Even though the network was not filming last year, Fieri and his Kulinary Krew donated their time, gave away 500 sandwiches to the public and players; and let the Soroptimist sell hundreds more as a fundraiser. 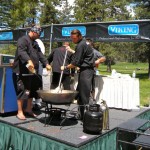 Cooking up batches of pork on the 17th hole at Edgewood Tahoe in 2009. Photos/Kathryn Reed

Squirt bottles with Fieri’s tattoos etched on them that once had tequila or water, and aprons were tossed out to the throng gathered around the stage that looked out onto the 17th fairway.

After winning The Next Food Network Star competition in 2006, Fieri has become the host of four shows – Guy off the Hook, Guy’s Big Bite, Ultimate Recipe Showdown, and Diners Drive-Ins and Dives.

None of the guys professes to be much of a threat on the links. Dirty P. said think Chuck Liddell, and that’s where the cooking crew would rank.

Put a kitchen tool in these guys’ hands and they will work magic, even with the distraction of motor boats, personal watercraft and partiers strewn along the sandy shore of Lake Tahoe just a few feet from them.

Below is the recipe for the pork sandwich Fieri was serving at last year’s golf tourney. Because he was cooking it over a large vat fueled by propane for the masses, you’ll need to figure out the quantities for your taste buds and number of people you’re serving.

This year marks the 21st annual celebrity golf tournament at Edgewood Tahoe – July 13-18. For info, go to www.tahoecelebritygolf.com. Fieri will be back, but not cooking. Instead, look for him to be prowling the grounds in his personal souped up golf cart.