WHISTLER, British Columbia –The stiffest competition for Lake Tahoe athletes and others showing their stuff at the 2010 Winter Games may not be with each other. It may be sharing the spotlight with the mountain, or mountains.

As the largest ski area in North America, Whistler Blackcomb located in Canada’s Coastal Mountain Range is hosting the Olympics in a grand way — much like the beauty of its scenery and magnitude of its terrain. It’s steep, deep, vast, inviting, gorgeous and involves a level of concentration few ski mountains in the United States command. 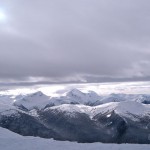 Views from Whistler-Blackcomb are stunning in all directions. Photos/Kathryn Reed

Nearly double Heavenly Mountain Resort’s 4,800 acres of terrain, and you have Whistler-Blackcomb mountains, which are linked by the $52 million Peak-2-Peak Gondola that can whisk 28 skiers and boarders — 4,100 per hour — from the high elevation of one to the other in 11 minutes.

The views, including those provided from the nearly 3-mile gondola that opened in December 2008, offer something out of the most dramatic scenery in Europe — Zermatt, for example. The Switzerland ski area boasts the world’s longest run, 8 miles into Italy. Whistler is a close second with a 7-mile connection of runs from Sidewinder to Upper and Lower Olympic runs. The mountain’s summit to base adds up to a 5,000-foot vertical drop from 7,494 feet to the 2,140-foot bottom.

Traversing to other trails is refreshing compared to some Tahoe resorts. The terrain heads where it’s supposed to — down. For skiers and boarders wanting to get down and dirty on the slopes, the angles — at times 45-plus degrees — along with the degree of difficulty, make it challenging.

Skiing Whistler is like being in the center of a magical vista of rugged, jagged peaks that seem to envelop the resort.

And the beauty of this Winter Games venue goes beyond the stunning scenery of white-capped mountains. Ninety percent of this massive ski resort will be open while competition is going on. The men’s and women’s downhill runs, along with the super G and giant slalom courses, lay near to one another or overlap above the Whistler Creekside area. (See Lake Tahoe News archives for a firsthand look of the downhill courses.) This leaves the Whistler Village base and all of Blackcomb Mountain to ski during the Olympics.

Even the Whistler Sliding Centre — which features the bobsled, luge and skeleton runs — was built in the lower elevation above the tubing park outside the ski area boundary. The Nordic events, including the ski jumping, are set for Callaghan Valley just south of Whistler.

And the freestyle and snowboarding events such as skiercross and halfpipe competitions will be staged at Cypress Mountain just north of Vancouver. Organizing committee officials were feverishly trucking in loads of snow placed over hay bales and wood to support the terrain parks for the event, as Cypress Mountain’s lack of snow and pounding rain became an issue in mid-January. (Lake Tahoe News recently witnessed the construction effort.)

But the British Columbia resort of Whistler, 90 miles north of Vancouver, is having a banner year of snow. Shortly before hosting the world’s premier sporting event, more than 32 feet had collected. That’s about the seasonal average in most years.

And although the ski resort was experiencing a bit of a pre-Olympic lull like many host cities do, the Martin Luther King holiday weekend brought out record crowds to enjoy the windfall of soft snow. Whistler logged three times its usual number of customers with more than 21,000 riders hitting the slopes. The holiday turned out to be busier than Christmas.

The snow in mass quantities has covered much of the trees and most every bowl and glacier. Blackcomb has two glaciers, a namesake and Horstman. There, mountain host tour guide Susan Sommer reminded her group they were standing on 200 feet of glacial ice situated between the Jersey Cream Express and Glacier Express chairlifts.

No need for “express” in the chairlift names. All the lifts are fast, faster than what many U.S. resorts tout as high-speed.

Lighted boards placed in convenient areas tell a visitor what’s open and closed. They also indicate the length of wait in lift lines.

Little things like having the lift lines taper into a single shoot by strategically placing barriers to force skiers to merge makes for a more pleasant experience than the pushing-shoving herd mentality in Tahoe, or dealing with less than efficient lifties who can’t seem to get people to fill a chairlift.

Friendliness is another component of Whistler that seems to be as big as the mountain. The employees, the locals, the tourists — everyone is friendly.

And the skiers — who dominate in number over snowboarders — are predominately at a high skill level. That’s not to say all are. But even the little tykes in ski school were taken in and out of the trees and through the multiple, massive terrain parks.

And if you’re lucky enough to catch a powder day, Whistler-Blackcomb can make every run a giddy experience.

It’s easy to fall in love with Whistler’s sweeping views and challenging terrain. Blue runs would be considered black throughout much of the United States. One that goes off the charts in expert terrain is off the 7th Heaven Express chairlift. A ridgetop peninsula stops at a sheer drop in both directions and is fondly referred to as Proposal Point. A little folklore says men were thought to have proposed marriage at the cliff. If the prospective mate said “no” to the suitor, she’s pushed off.

John from England, who was on the free tour, told Sommer he thought she called it “disposal point.”

“I don’t think I like the sound of that,” he joked.

From the Hughes Heaven and Crystal Traverse trails to the Ridge Runner and Cruiser runs, Blackcomb offers spectacular views and many options for terrain that extend to Whistler mountain’s four bowls and cute names for runs like Doom and Gloom and Grande Finale.

“You can come up here the rest of your life and never get tired of it,” Sommer said, glancing off to the distant mountains from Blackcomb. The tour guide, who has lived in the Whistler area for 34 years, pointed out the Black Tusk — a volcanic cone of molten ice.

It’s recommended a visitor make time on vacation to grasp all there is to offer at Whistler because even three days on a well-worth-it $93 adult lift ticket does not cover it — especially if electing to go in for lunch in the resort’s 17 restaurants. Both mountains have two large-scale mountain restaurant-retail complexes — the Rendezvous on Blackcomb and Roundhouse on Whistler. Others are smaller like the Crystal Hut at Blackcomb’s mid-mountain, which touts the waffle zone for its infamous breakfast meal.

The food choices are phenomenal, their prices are less than in the States and no smoking signs make it clear what the priority is. A variety of accents can be heard on the slopes and lodges.

Scott Wright, who originally hails from the Fresno area, brought his family of six to the slopes from New Zealand.

“We usually go to Colorado, but this is a better value,” he said, while exiting a chairlift. Wright was able to get a direct flight from Auckland to Vancouver. He also commented on the lodging and food being less expensive at Whistler than Aspen.

Whistler-Blackcomb ski area was inspired by a trip to the 1960 Squaw Valley Olympics by Franz Wilhelmsen, whose name graces the women’s downhill run. He formed Garibaldi Lift Limited with the intention of creating a ski area on what was called London Mountain in Whistler.

It was renamed Whistler Mountain in August 1965 in honor of the local alpine marmot who whistles when it communicates. Whistler opened for skiing in 1966, and its neighbor Blackcomb Mountain threw open its gates 14 years later.

Now the mountain has 38 lifts, including two T-bars and the latest Peak-2-Peak Gondola. The latter is the showcase lift for skiing and sightseeing.

Below the gondola, the Fitzsimmons Creek meanders through a deep valley where a renewable energy project plans to offset the total annual energy consumption of the resort — 33 gigawatts of power. Sustainable practices are a part of the plan here, with recycling programs that include using ceramic mugs for hot chocolate. With that, the resort was able to reduce its single-use cups by 833,100 cups in one year during the season beginning 2008.

Kathryn Reed contributed to this story.