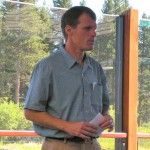 State parks, releasing prisoners, budget woes, water and concealed weapons. Those were some of the topics broached by Ted Gaines and his South Shore constituents.

The assemblyman who represents the California side of the lake was in South Lake Tahoe last month for an informal coffee and chat with locals.

“I think we get too polarized when we are trying to solve problems,” Gaines said of the Legislature. He believes legislators get caught in ideological quagmires that prevent them from moving forward for the greater good of California.

With that said, the Republican didn’t hold back on criticizing those on the other side of the political aisle.

When it comes to cutting state departments such as state parks he wishes it were handled differently.

“Sometimes it’s like using a meat cleaver when we should be more precise,” the assemblyman said.

He didn’t have any insider knowledge into which state parks in the Lake Tahoe Basin may be closed. Sept. 18 is the date the names of the 100 state parks to be shuttered, which is more than one-third of the whole system, will be announced.

Gaines questions why the state pays for a prisoner with sleep apnea to be hospitalized and receive 24/7 guard service at taxpayers’ expense.

“I know government is inherently inefficient,” he said.

He pointed to being a supporter of consolidating 11 state boards or commissions as an accomplishment in the last session.