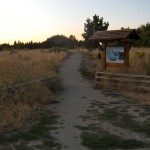 Discussion of how the Lam Watah trail will be used in the Stateline bike project was discussed Sept. 10. Photo/Kathryn Reed

STATELINE — Differing opinions and several questions were brought out Thursday night about the two routes being proposed for the southern demonstration project of the Stateline-to-Stateline bike trail.

A third alternative, which is to do nothing, was not endorsed by any of the five people who spoke. More then 20 attended the meeting.

The roughly 30-mile trail from Stateline to Crystal Bay will have a demonstration site on both ends that will be built before the bulk of the trail is developed.

Charles Dane, Douglas County parks commissioner, said his board voted 5-0 Sept. 1 for Alternative B because it better meets the goals of the project and needs of users, plus it’s less intrusive to private property owners. Douglas County commissioners are scheduled to take up the issue later this month.

Cyclists were well represented at the meeting. Richard Boyle of Zephyr Cove said he’s already pedaled around the lake seven times this year. Peter Roth who lives in the Elk Point area wants the powers that be to look at using the trail the US Forest Service recently put in by Round Hill.

Ty Polastri, who runs Lake Tahoe Bicycle Coalition, had a slew of questions and concerns about what type of amenities will be at the trailheads — like bathrooms, bike racks and information kiosks.

He is concerned that when this three-mile long trail ends at Round Hill cyclists will be left at a dead-end with no information about what trails might exist in the area, nor prior knowledge that the initial route doesn’t go far.

“We are patch working bicycle trails in the basin,” Polastri said.

Deborah Moretto of Elk Point asked about maintenance of the trail and enforcement if people are not respectful of private property. Disrupting wildlife habit was another big concern of hers.

The comments will be incorporated into the environmental document. Anyone can comment on the three alternatives until Sept. 21. Address them to Melissa Shaw, 128 Market St., Stateline, NV 89449.

The schedule is to have the draft environmental analysis done this fall or winter, with its release in early 2010. The public will have 30 days to comment on it. The final EA is expected  in summer 2010. It will go before the Tahoe Regional Planning Agency and US Forest Service, the joint lead agencies on the project, in summer 2010. Ground could be broken in 2011.

More information about the project is at www.nvtahoebikeway.com.