The 2018 Hyundai Ioniq — the best hybrid you can buy. Photos/Larry Weitzman

It has been exactly one year since I last tested a Hyundai Ioniq hybrid, however this time around my tester was a base model stickering for just $23,210. My prior test vehicle was a top of the line Ultimate edition. Essential they are the same vehicle except for content. But that doesn’t mean that this base unit is a stripper. It isn’t as it comes standard with power windows, mirrors, backup camera and most everything else one could want. If you want NAV and power seats, you won’t find it on the base.

But there is something that this base model called “Blue” has that was not found in the Ultimate and that is high performance and even better fuel economy. So much so that when I called my prior Ioniq Ultimate the best hybrid with the title “The best hybrid just got better,” I was mistaken, as this base Blue model now holds the title the “best hybrid you can buy.” Read on and you will understand.

Hybrids main purpose is achieving better fuel economy. The Ioniq not only achieves the best fuel economy of any (non-PHEV) hybrid, it does so with high performance and the lowest price of any hybrid and it is a high content car.

Ioniq is a great looking car in its own right and the best-looking hybrid ever designed as a hybrid with strong shoulders, a sweeping roof and window line and a slightly Kamm tail incorporated into a hatchback design. It is a small compact at 176 inches in length by 72 inches wide on a 106-inch wheelbase. It stands 57 inches tall. But its diminutive size is deceiving as it has the interior capacity of a large car at 123 cubic feet including 26 of those cubes in the cargo hold. The first time I saw one on the road it caught my eye as a great looking ride and actually caught up to it to see what it was. I was surprised to find out that it was an Ioniq.

Nothing has changed under the hood as Ioniq is powered by a 1.6L DOHC, 16 valve, Atkinson cycle inline four-cylinder engine of 104 hp at 5,700 rpm and 109 pounds of twist at 4,000 rpm coupled to a 43 hp and 125 pounds of twist electric motor all driving the front wheels through a super-efficient six-speed dual clutch tranny. Its Lithium-ion polymer 1.56 kWh battery provides the power to the electric motor and has a lifetime warranty. Find that in another hybrid. Bottom line is a combined 139 hp from the engine and electric motor. 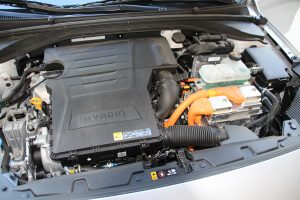 It is an amazing power system that propels the little Ioniq from 0-60 mph in 7.62 seconds which is 1.3 seconds quicker than my Ioniq Ultimate test. Passing tests also reveal this new-found pep with a 50-70 mph run of just 4.33 seconds and the same run up a 6-7 percent grade only taking 6.73 seconds. My prior Ultimate test had respective performance numbers of 8.91, 4.56 and 8.60 seconds which reflects a significant performance improvement. Compared to a Prius, the Ioniq is about two seconds faster to 60 mph.

About the only difference between the base Blue model and the Ultimate is about 120 pounds less weight. The Blue model also returned slightly better fuel economy, better than any other hybrid the Road Beat has ever tested. EPA rates the Blue at 57/59/58 mpg city/highway/combined and the Blue just about achieves those lofty numbers with a 70-mph highway fuel economy of 55.6 mpg in a two-way run. In a run from Placerville to South Lake Tahoe, the Ioniq Blue returned exactly 58 mpg in moderately aggressive driving that included several full throttle passing runs. It is the first hybrid tested to basically achieve its EPA numbers. Amazing. It always averaged 50 mpg or better in 400 miles of testing. Zero to 60 mph in 7.6 seconds and 58 mpg. Amazing. And the Ioniq feels peppy and very responsive. Helping fuel economy is the Ioniq’s ability to run pure electric at speeds of 70 mph and do so for periods of two to three miles, especially when cruising at 50-55 mph. Even with its puny 11.9-gallon fuel tank, expect cruising ranges of 600 miles with reserves.

Ioniq also has sophisticated four-wheel independent suspension, quick steering (2.66 turns lock to lock) and a tight 35 foot turning circle. However, the standard 195/65 x 15-inch rubber are mounted on 15-inch alloys but with some ugly wheel covers. While 4 pounds shy of 3,000, it still handles nimbly, but the optional 17-inch alloys and 225/45 rubber would make those Mario Andretti wannabes happier.

The ride is very quiet and smooth.

All your basic safety acronyms are present such as ABS, VSM, TC and more. Brakes are strong four-wheel discs (front ventilated) and the headlights are good. It also has an excellent back up camera. However blind spot monitors and lane departure steering assist are not present in the Blue’s standard equipment list which is fine with me as I don’t have to look for the disabling switch.

Inside is a quality interior with comfortable seats, good rear seat legroom and plenty of soft touch trim. It is surprisingly nice. OK, so the seats aren’t powered with electric motors. But they are easy to manually adjust.

Instrumentation even includes a bar graph tach which is nice for a hybrid and enabled me to report an engine speed of 2,100 rpm at 70 mph. It is also an easy way to determine when you are running pure electric as it is hard to feel otherwise. That’s how smooth the Ioniq is. The center stack is easy to use with an HVAC that has separate temp controls for driver and passenger. Nice.

Pricing is a scant $22,200 plus $895 for the boat from Ulsan, Korea. The fancy floor mats add $125 bringing the total Monroney to $23,210. Hyundai Ionic Blue is the hybrid deal on the market. I would love to have one in my garage. Satisfying performance, great looks, fabulous fuel economy at a frugal price.