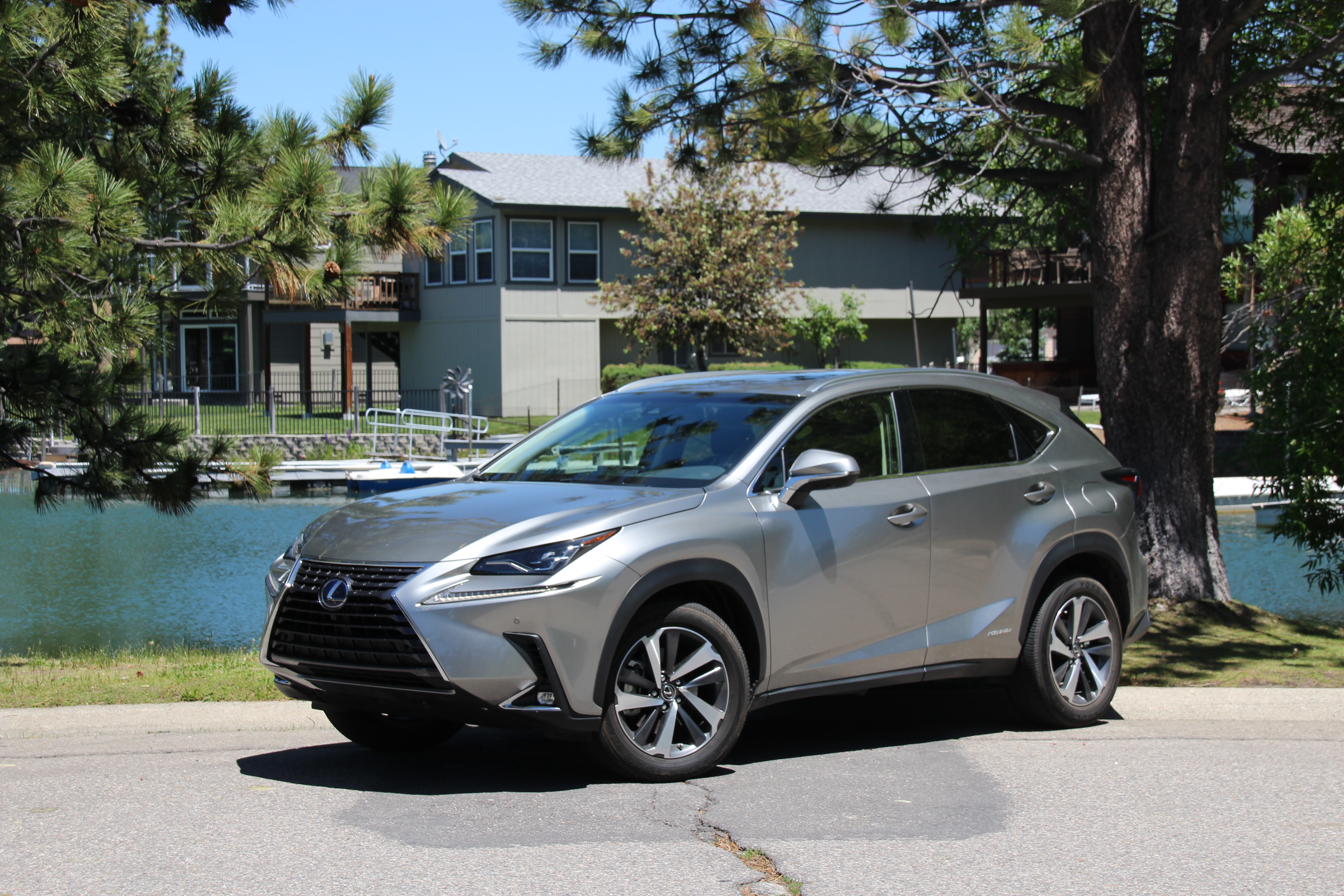 The 2018 Lexus NX300h is going to put a smile on your face. Photos/Larry Weitzman

It seems for almost every Toyota, there is a Lexus. With the Lexus NX300h that impression might have some merit. The new NX series, originally introduced for the 2015 model year has some relationship with the Toyota RAV4 (which happens to be the biggest selling compact SUV), sharing some structure, wheelbase and a few internal components. But NX’s body, most of its suspension components and the engines are either completely unique or only bear a small resemblance.

Of course, there is absolutely no resemblance in the looks department. NX is sleek and edgy, with its familiar Lexus trademark grille. From the side, the front end stands out, having and almost “nose cone” look. Stand back and check it out. Those edgy character lines add a clever sharpness and purpose making the NX a standout looker. Only the prominent grille detracts, but only slightly as its headlight assemblies make up for what the grille overpowers.

Size wise, the NX is a compact SUV sharing wheelbase with its distant cousin the RAV4 at 105 inches while stretching out to 182 inches. Part of its muscle cones from its broad shoulders with a beam of 74 inches. Track is a wide 62 inches front and rear.

Powering up the NX300h is a 2.5L Atkinson cycle inline DOHC 16 valve four pumping out 154 hp at 5,700 rpm and 152 pounds of twist at 4,400 rpm. In addition are three motor generators, one acting as an engine starter and generator for both the main systems and the nickel metal hydride battery energy cell. There are two other motor/generators, one with a max hp of 141 hp driving the front wheels and a second, a 67 hp unit m/g driving the rear wheels. But the reality is that the battery’s max output is 40 hp which means total output from all sources is 194 hp. The engine drives the front wheels via a CVT. 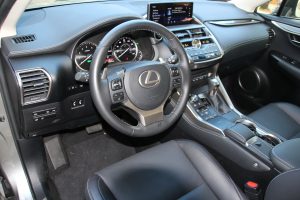 One of the beauties of this hybrid system is that the rear wheels are only powered by the electric motor, so there is no drive shaft or other mechanical connection from the front engine creating simplicity and saving weight.

Performance is virtually identical to my last go round with the NX300h right after its initial introduction. It knocks of 0-60 mph in a satisfying 7.56 seconds and a level 50-70 mph simulated pass takes just 4.12 seconds and the same run up a 6-7 percent grade requires 6.46 seconds, all times from a high-performance SUV. The throttle is very responsive and mid-range is strong. Interestingly Lexus in its press materials lists 0-60 mph at 9.1 seconds. Maybe they need to recalibrate their stop watch as it runs a bit slow or maybe they were towing its maximum allowable load of 1,500 pounds.

Fuel economy benefits from its hybrid powertrain are demonstrable, having an EPA rating of 33/30/31 mpg city/highway/combined. However, the NX does a bit better with a highway mileage of 34.5 in actual testing at 70 mph. The engine spins a low 1,800 rpm at that speed. Overall the NX averaged about 29 mpg in country, rural driving where there is little stopping and brake regen. It will run pure electric under very light throttle at speeds below 45 mph. In a 200-mile round trip from Placerville to Carson City over Echo Summit the NX averaged 32.4 mpg in very aggressive driving. That is a 3-5 mpg improvement over its conventional counterpart with more performance. Fuel capacity is only 14.8 gallons a little over a gallon less then its conventional counterpart. Bigger would be better.

NX is sporty as is the handling. It has all the ingredients, state of the art suspension, including double wishbones in the rear. Steering is a quick electric power rack at 2.68 turns lock to lock. Its 18 x 7.5-inch alloys are shod with 225/60 series rubber allow for a reasonably quick turn in. It’s only debilitating number is its considerable mass of 4,180 pounds making it more difficult to change directions. But it does change directions with agility quite well when pushed in the twisties and you will enjoy driving the NX when the road begins to bend.

Because it’s a hybrid it should be smooth and quiet and adding very to both adjectives. It will run as an EV for up to a couple of miles at speeds below 45 mph with a feather foot. Ride quality is on the firmer side, but it certainly won’t cause additional bathroom breaks. It handles bumps and other road imperfections like a Lexus.

Safety is basically as good as the operator, but Lexus has installed every safety system one can think of. All the acronyms are present. The lane keep assist was to me a bit intrusive, so I turned it off, but NX hybrid is a very nice drive with strong brakes and excellent headlights.

Inside is a superb quality Lexus interior of leather, soft touch and switchgear, including an electronic tach when using the sport driving mode, switchable on the console. But also, on the console is the touchpad radio controls which need to go away. It is most difficult to operate and distracting.

Price of admission for this near luxo CUV/SUV begins at a reasonable $38,335 plus $995 for the boat from Miyawaka, Fukuoka, Japan. Options including the $4,700 Luxury Package is a worthy addition as are the Triple-Beam LED headlights with AFS (meaning they turn with the vehicle) adds another $1,515 and the NAV system is another $1,800. Other options brought the total Monroney to $49,770. You will want most of the options on my tester so figure a price approaching $50 large.