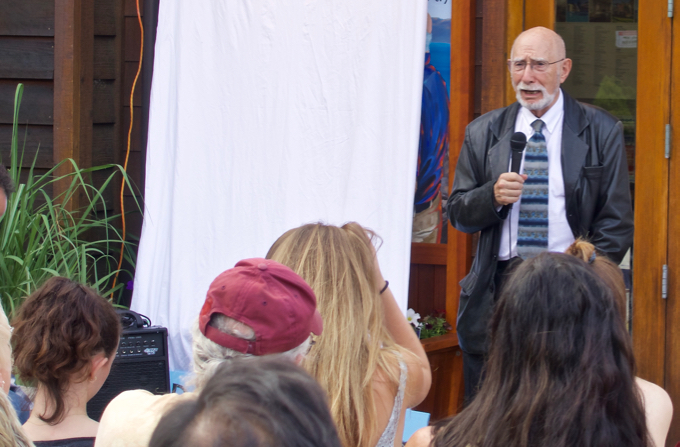 Charles Goldman on July 18 at the unveiling before about 50 people. Photo/Kathryn Reed

The love Charles Goldman has for Lake Tahoe goes much deeper than the depths of this cobalt blue body of water.

His relationship with the water and somewhat the land is much greater than most beings.

Goldman first came here in 1958 and a year later began what would become a decades-long career of research. He is considered the godfather of limnology, the study of fresh water.

It’s not just scientific papers that he has authored, though there are plenty of those. Many of which led to policies that affect the lives of those who live and visit here on a daily basis.

The 86-year-old Goldman has also written two children’s books and is in the process of writing another book about the adventures of limnology that will be geared toward the non-scientist.

A while ago he penned a poem about what Tahoe means to him. Now it is visible for all to see at Ski Run Marina on a 48-inch by 70-inch piece of art that was unveiled July 18 near Riva Grill. 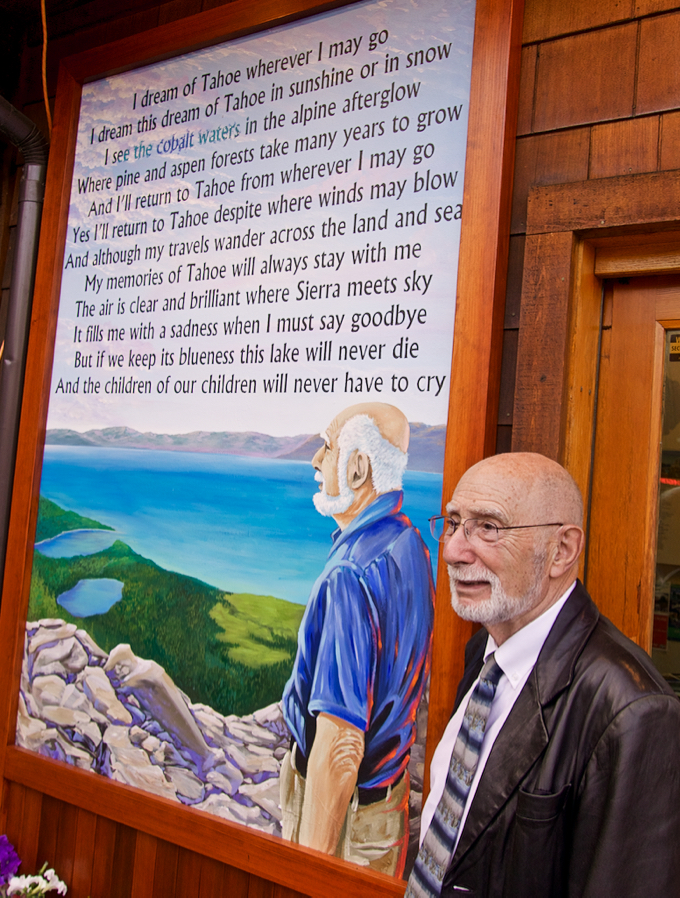 Charles Goldman next to the mural with his poem at Ski Run Marina in South Lake Tahoe. Photo/Kathryn Reed

I dream of Tahoe wherever I may go

I dream this dream of Tahoe in sunshine or in snow

I see the cobalt waters in the alpine afterglow

Where pine and aspen forests take many years to grow

And I’ll return to Tahoe from wherever I may go

Yes I’ll return to Tahoe despite where winds might blow

And although my travels wander across the land and sea

My memories of Tahoe will always stay with me

The air is clear and brilliant where Sierra meets sky

It fills me with a sadness when I must say goodbye

But if we keep its blueness this lake will never die

And the children of our children will never have to cry.

Local artist Abner Rivera camouflaged the word “love” into the sky behind the poem to capture the feeling so many have about the lake. Goldman is then seen standing on the top of Mount Tallac looking out to Lake Tahoe with Cascade Lake and Emerald Bay below him.

It was marina owner Elie Alyeshmerni who came up with the idea of adding this layer of art to his center. He and Goldman only met about a month ago, but it was friendship at the get-go. It all came together that fast.

Speaking at the dedication on Wednesday night were Darcie Goodman Collins with the League to Save Lake Tahoe and Geoff Schladow with the UC Davis Tahoe Environmental Research Center. Both have worked with and for Goldman, and revere him. They single Goldman out, recognizing him as the one to sound the alarm to begin protecting Tahoe if it were to have a chance to remain the iconic body of water that it still is.