Zephyr Cove Tennis Club will be the site of the Tahoe Tennis Classic, July 26-29. Photo/Provided

Dominic Mushines is proving almost daily that tennis is a lifetime sport.

This week the 84-year-old is going to test his abilities when he competes in the 35th annual Tahoe Tennis Classic at Zephyr Cove Tennis Club.

“Younger guys can overpower me, but I have for my age pretty good reflexes and ability,” Mushines told Lake Tahoe News. “I am fairly fast on my feet for my age. I’ve learned to be patient on the court and not try crazy shots. I wait for the opportunity to make my shot.” 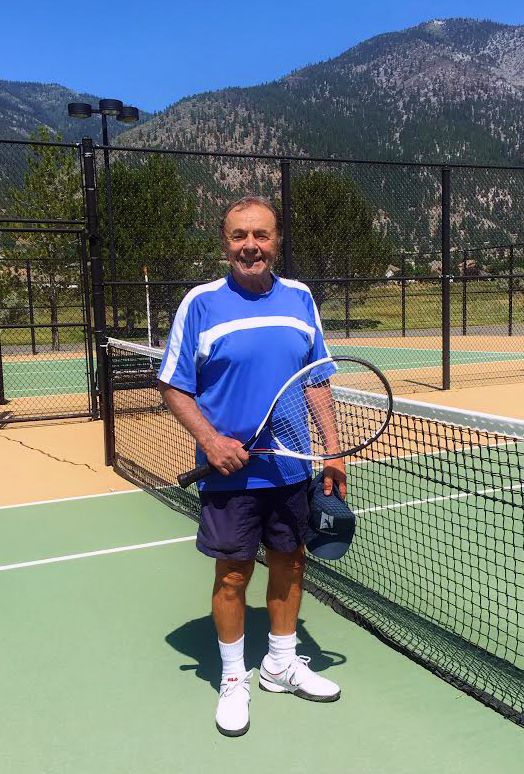 With age comes patience, which can be an added bonus on the tennis court, especially against younger opponents.

It’s been a few years since Mushines has competed in a tournament or league. Today it’s more about playing with friends on a recreational basis.

In the four-day Classic, which starts Thursday, Mushines and his partner Ross Rittiman of Zephyr Cove are guaranteed two matches – just like the other 200-plus competitors. They are competing in the 140-plus division, meaning their combined ages are at least 140.

He’s happy to be playing with someone younger; hoping Rittiman does more of the running.

With the temperature supposed to be in the 80s this week, Mushines isn’t worried about the heat affecting him.

“I can wear the young guys out. They aren’t used to heat,” Mushines said. “You have to look for every little advantage you can.”

While he may not have been competing regularly, that doesn’t mean Mushines hasn’t been playing.

Mushines is able to play year-round because he lives at Genoa Lakes in the summer and in Palm Springs in the winter. The attorney isn’t sure the exact number of years he’s played tennis – 60 something – but he does make sure wherever he lives that a tennis court is nearby. The sport is that important to him.

Once a friend turned him onto the sport he has been playing it ever since. For years he lived in the Tahoe Keys neighborhood of South Lake Tahoe, and would often be found on the courts there.

·      There is no fee to watch. This is some of the highest caliber tennis played on the South Shore.

·      This is the main fundraiser for the nonprofit Zephyr Cove Tennis Club Foundation.