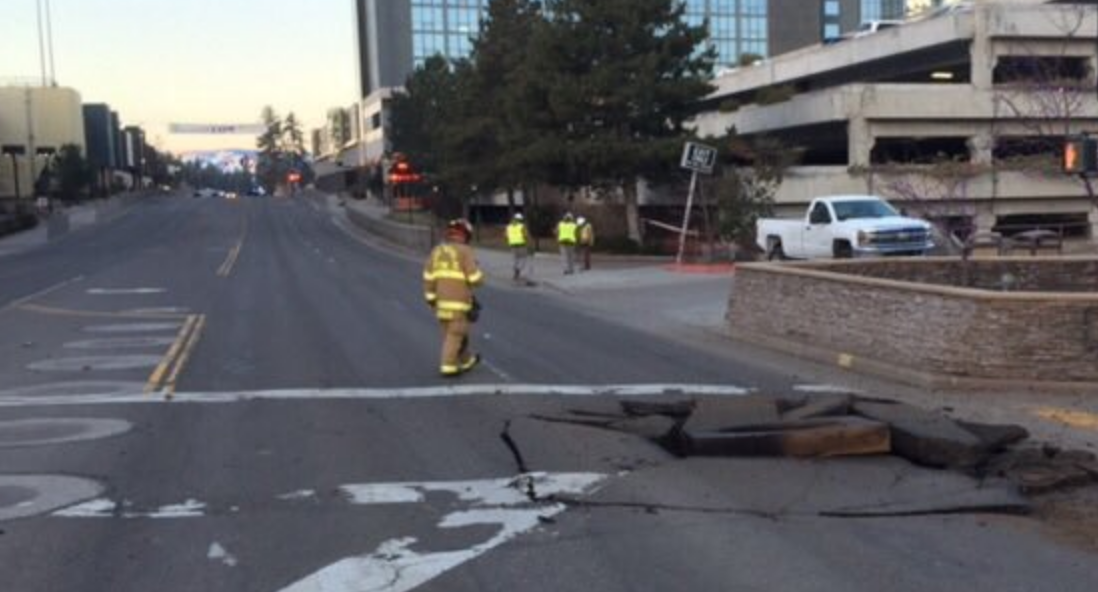 Highway 50 near Hard Rock in Stateline is severely damaged. Photo/DCSO

An underground electrical explosion this morning in Stateline has caused Highway 50 to buckle and be closed, and for power to be cut off.

A loud explosion was heard at about 5:15am April 1 in front of the Hard Rock Lake Tahoe.

Investigators were still on the scene as of 9am Sunday trying to figure out what went wrong and how to fix things.

“A pole vault caused the original explosion. A second pole vault is being taxed and they are trying to isolate the situation,” Douglas County sheriff’s Sgt. Bernadette Smith told Lake Tahoe News.

No one was injured.

It could be weeks before the road is fixed. Photo/DCSO

The explosion blew off a manhole cover and caused asphalt to fly, thus creating a depression in the roadway. Highway 50 is closed between Stateline Avenue and Lake Parkway. Smith said the westbound lanes could be closed for weeks, though the eastbound lanes could open later Sunday.

Meg Ragonese with the Nevada Department of Transportation said NV Energy is still dealing with live infrastructure so it is too soon to know when the road would open or repairs would begin.

“They would make all the repairs since it is a utility related incident. There is not estimate yet of reopening the highway,” Ragonese told LTN.

About 400 customers were without power for about two hours. Then NV Energy crews rerouted circuits, with the outage affecting only seven customer at of 9:30am.

“It’s under investigation. They don’t know what caused it. Any number of things could have happened,” Calder Chism, NV Energy spokesman, told LTN.

A security guard at Hard Rock hung up on Lake Tahoe News when asked a series of questions, including if anyone was evacuated.