Alcohol will be allowed on a regular basis at Lakeview Commons starting in May.

This is a big departure from South Lake Tahoe’s rules that have been on the books for years that banned alcohol sales or consumption at city parks except under special occasions, like the Thursday Live at Lakeview events.

A glitch of sorts is what has led to the change in policy.

When the request for proposals for a concessionaire at Lakeview Commons were sent out they said alcohol was allowable. Sierra-at-Tahoe, the winning bidder, budgeted for the sale of beer and wine.

Attorney Sergio Rudin with the law firm of Burke, Williams and Sorensen at the April 17 City Council meeting said there are three general exceptions to the city’s alcohol ban, of which it would be possible for Sierra to qualify under at least one. 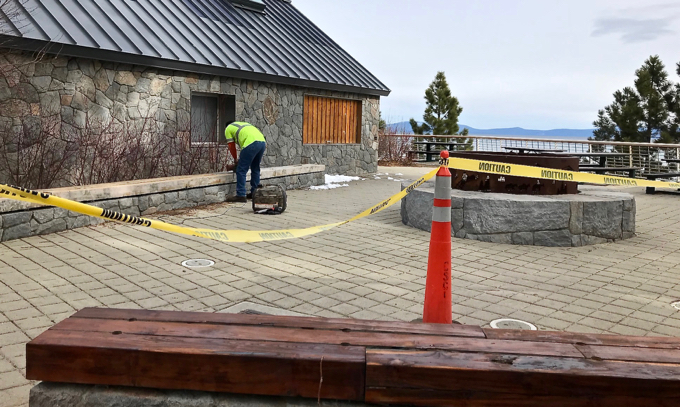 A South Lake Tahoe employee works to get Lakeview Commons spruced up for the summer season. Photo/Kathryn Reed

The council and staff ultimately allowed the deal to go through, with Rudin acknowledging a code amendment may be needed to make everything legit. He also said the RFP was never reviewed by his office.

Lauren Thomaselli said the original RFP sent out five years ago mentioned alcohol as a possibility, but staff didn’t allow it. It’s not known why it was left in the document or who was responsible.

This time the winning bidder, though, had those sales as part of their proposal and no one brought it up as an issue until last week when the contract was about to be signed.

“We are not looking to put alcohol on the beach. It’s a little footprint outside the building,” John Rice, general manager for Sierra, told the council.

He explained how he would have staff on site to ensure people limited their consumption to a cordoned off area.

Rice also said, “If they bought beer from us, we are responsible for that person. We are exposed for our liquor license and liability as well.”

Another concern of council was the possibility of Sierra’s beer sales negatively impacting the beer garden during Live at Lakeview during the summer. Rice said he and that promoter have an existing relationship, and that they will depend on each other to be successful, as opposed to being competitors.

Sierra hopes to open the food stand in mid-May and run through at least Labor Day.

Scott Justice, who runs the resort’s food and beverage operation, plans to bring the same high quality fare skiers are used to to the lakefront setting.

A main goal is not to replicate what is already offered in the Harrison Avenue area. Tortas will be a main feature. Vegetarian options will be available. Common staples people expect at a venue like this will be available – like nachos, hot dogs and pizza.

Something different will be Taiwan ice, which Justice described as being between shaved ice and ice cream.

“We also want to do catering there, so guests at Lakeview have a catered meal” Justice said.

He envisions providing a meal with wine or beer, with a view of the lake.

“That’s a pretty rare opportunity, especially for someone camping across the street. It will be a value for those folks,” Justice told Lake Tahoe News.

The goal, he said, is to be nimble and adjust as necessary with offerings as the season progresses.