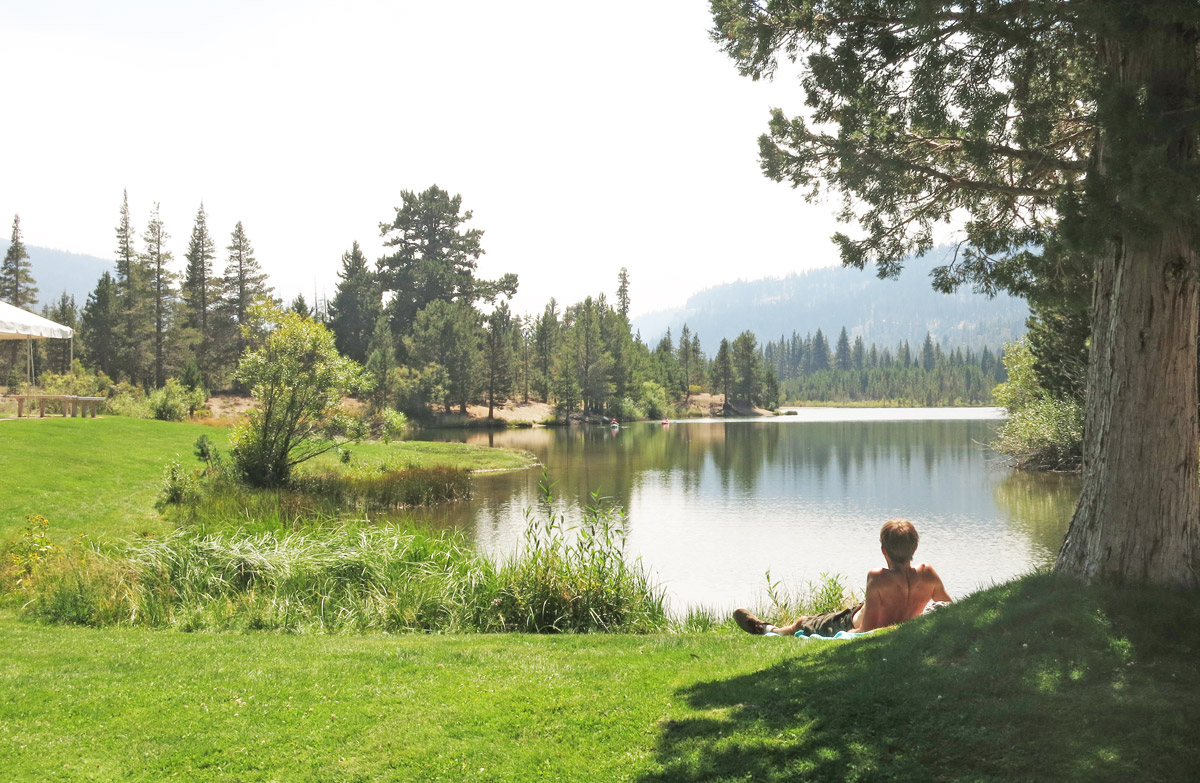 Michael Moughler looks on as his mother and sister kayak around Lake Baron. Photo/Jessie Marchesseau

MEYERS – On a recent Friday afternoon, Michael Moughler lounged on the shore near Lake Baron while his mother and sister paddled their kayaks in the quiet, mirror-smooth water. This is a pretty average day at Tahoe Paradise Park, and that’s part of the reason Michael loves it so much.

He comes here at least three times per week, sometimes more. He walks his dog on the trails, kayaks and swims in Lake Baron and rides his bike around the 56-acre park. He taught his mother, Jan Moughler, how to kayak on this very lake where she is now, in turn, teaching Michael’s sister.

The park is mostly used by locals, and most days it’s pretty quiet. Jan Moughler pointed out that you can still come down here and be able to get a picnic table pretty much anytime, but she also enjoys the events in the park like the concerts, car shows and dog-friendly fundraisers.

Tahoe Paradise Resort Improvement District has been implementing quite a few changes in recent years, including hosting such events. Though they weren’t able to pull together many events this summer, the board of directors has still been busy working on projects.

As for visible changes at the park, the new sign should go in at the entrance this month, the recently restored flower garden is just starting to bloom, and if you take the time to throw in a line, you might pull out one of the freshly stocked trout.

Moughler said he has noticed the trails looking cleaner than in past years and is a big fan of the board’s decision to start allowing dogs in the park a few years ago.

“I just hope that everyone respects it as much as I do,” he said of walking his dog in the park. 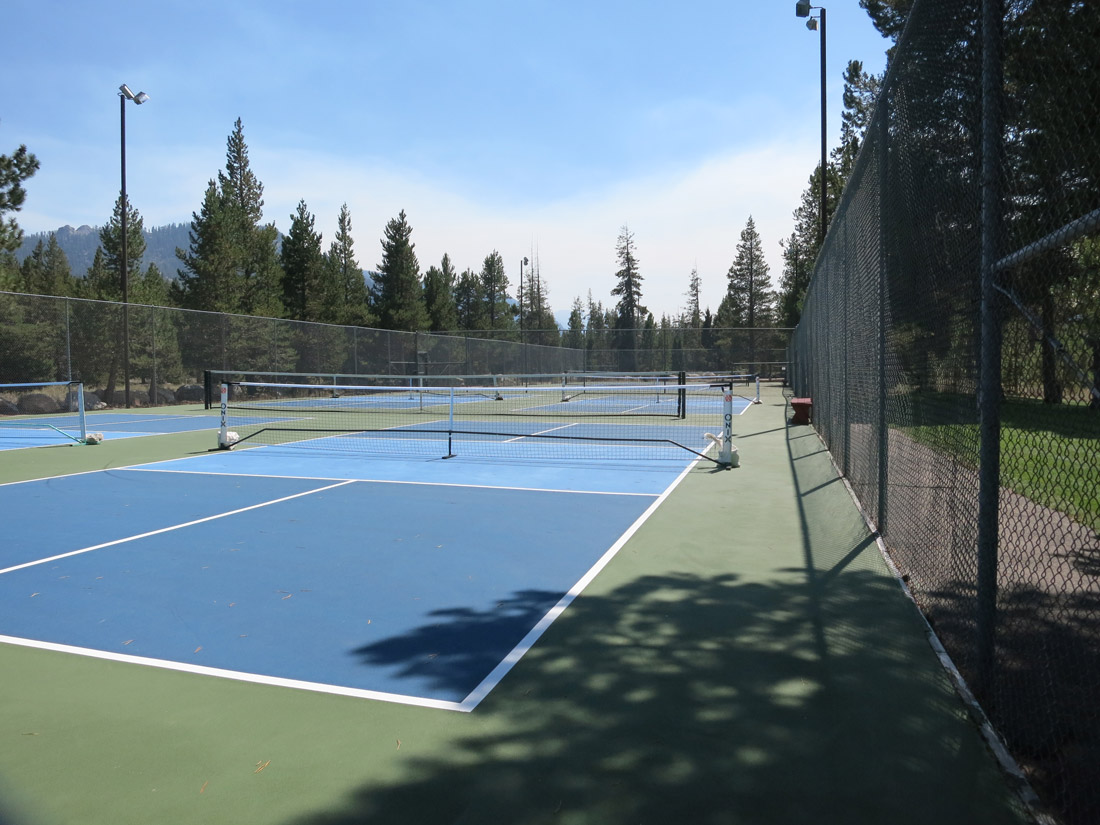 Another recent, though less visible change, is the transition from a resort improvement district to a parks and recreation district. Though this change should not have much, if any, effect on the day-to-day operations of the park, it will allow them to take advantage of more recent laws and regulations. The paperwork is still in the pipeline, but the switch is expected to be final in January.

The board is also gearing up for a fall project which includes replacing the deck, adding ADA compliant paths to the building, beach and deck, as well as rehabilitating the sandy beach area in front of the clubhouse. At the Aug. 31 meeting, board members discussed procuring bids in the coming weeks with the intention of completing the project before winter so it will be ready for spring weddings.

Last year, the TPRID board decided to raise the fees for weddings, almost doubling the price, to an amount they deemed to be more in line with the rates of other local wedding venues. Victor Babbitt, chairman of the board, explained that part of the reason behind the price increase was an effort to make the park and its clubhouse more about the community and less about weddings.

Babbitt said he envisions things like community events, boat rentals and kids programs taking place in and around the clubhouse. If it is rented out for a wedding every weekend, it makes that virtually impossible. It also makes maintenance difficult as it can’t be done during weddings and events. However, they still need the revenue from weddings, so having fewer weddings at a higher price has worked out so far.

Another source of income this summer has been fees for using the newly resurfaced tennis and pickleball courts. One of the existing courts was resurfaced as a tennis court again, and one was turned into four pickleball courts. A $3 per day fee was implemented for use of the courts which visitors put into a box designated for payments. It’s strictly on the honor system, and there are enough honest people using the courts that it has brought in more than $1,300 this summer.

The third court still sits in disrepair with its future up in the air. It could become any number of things: a sand volleyball court, basketball court, bocce ball court, tennis court and raised community garden are just some of the ideas being considered.

Moughler, though not much for organized sports, told Lake Tahoe News he thought people would probably like the see the volleyball court put in.

Another potential source of revenue could be created by allowing a Verizon cell tower to be erected on park property. Verizon would pay a monthly rental fee for the tower. While still in the early stages of discussion, if approved, construction of the tower could start as early as next summer.

Other recent changes include renting out the onsite house which used to be part of the compensation package for the park caretaker. The tenants have been in for nearly a year now. They pay a reasonable rent and perform only minor duties like opening and closing the gates and ensuring everyone is out by closing time.

Tahoe Paradise Park currently has three employees: two maintenance workers and one event coordinator. The board is looking at expanding the staff next spring to also include a part-time park aide, a student intern and possibly a live-in park host similar to a campground host. The host would be able to park a live-in trailer or RV in a designated spot in the park in exchange for helping visitors and performing light park maintenance duties.

The board still has numerous additional master plan items in the works, the largest of which is the installation of bathrooms. With a price tag in the hundreds of thousands, the board is still searching for grants or donations to help fund it. Other projects such as benches around the lake, restoring the large picnic area, installing a gazebo, rehabilitating the basketball and baseball areas, staining the clubhouse siding, creating a walkway through the marsh at the south end of the lake and repairing the parking lot are still on the list. Board members hope they will come to fruition in the no-to-too-far future through a combination of donations, volunteer hours, grants and park funds.

But with all these “improvements” on the horizon, Moughler said he likes the park just the way it is: “I love it here. It’s my little paradise.”

Previous post : Opinion: Good governance an oxymoron in EDC Next_post : Concussions to be topic of lecture