Water agencies are pressing forward on a proposed work plan designed to outline how to eliminate the contaminant PCE from groundwater near the Y in South Lake Tahoe.

Richard Solbrig, South Tahoe Public Utility District general manager, gave his board an update Sept. 21 on treatment of a toxic plume known for decades to leach into the groundwater in the highly industrial area at the Y. Officials have narrowed at least one scope of the plume to property owners and operators of the Lake Tahoe Laundry Works, which once existed at the shopping center anchored by Raley’s. But the extent of the plume may not end there, and the plume could be co-mingled with others. 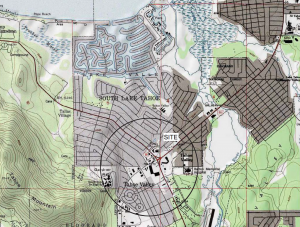 The circle represents the known area of the PCE plume in South Lake Tahoe. Image/LRWQCB

Delineating that represents part of what the work plan is intended to do.

The Lahontan Regional Water Quality Control Board has put into place a conditional work plan to further investigate the magnitude of the situation in order to define where and when to fix the problem, and who’s responsible. Responsible parties known so far, who were sent a letter by the regional water agency on Sept. 15, would be tagged to hire contractors to conduct the cleanup. First, water agencies need to figure out where the plume begins and ends.

“The plume is quite extensive,” Solbrig told his board. “We may have more contamination. We have a lot at stake.”

With at least a handful of wells known to have been contaminated in the Tahoe Keys and Lukins Brothers water districts that were shut down and capped off, STPUD has provided water from its system. However, the hope is STPUD’s backup supply won’t be too taxed.

All eyes from three water purveyors and the state are on those area wells – which all meet in one highly used zone drawing from the same aquifer.

The drought prompted California to regulate groundwater, ordering water jurisdictions to develop management plans. STPUD has taken the lead on the mandate and about a month ago, counted more than 600 private wells within its boundaries.

Contamination remains the biggest threat to the water supply.

An initial study was approved to investigate this latest PCE contamination. Monitoring the wells represents Job 1 while Lahontan’s proposed work plan is out for public comment.

Winter’s impact will have no bearing on changing the work plan – but within reason, Lahontan Executive Officer Patty Kouyoumdjian said a day after snow ushered out summer in South Lake Tahoe.

“If it snows 6 inches, at least it would be harder to drill,” she said.

But Lahontan needs a clear view of what is going on.

“This work plan will yield a lot of information,” she added.

Much is at stake for the water agency and the affected water districts. They’re asking for more money from the state water board.

Tetrachloroethylene, or PCE, is a manmade chemical largely used commercially as an industrial degreaser or spot remover. When improperly disposed of, the chlorinated solvent seeps into groundwater supplies.

In worst case scenarios, chronic exposure can cause damage to the liver, kidneys and central nervous system. It may also increase the risk of cancer.

“It’s unfortunate for these water districts. They didn’t cause this, and in the meantime, they’re concerned about getting clean water to their clientele,” she told Lake Tahoe News.

Lahontan plans to host community meetings on the subject.

This isn’t the first time STPUD has been forced to deal with a contaminant issue. In 1997, the gas additive MTBE — methyl tertiary butyl ether – was found in a dozen wells. The wells, among gas stations were consequently shut down. The district sued big oil in 2001 and won a $69 million lawsuit from 33 oil companies.

Like MTBE, the latest toxin – PCE – is a water solvent that represents a challenge corralling. It can move fast and wide.

The Y in particular is characterized as a commercial zone with the types of businesses deemed with disposing of chemical waste.

“There are lots of industrial businesses in that area,” said Jennifer Lukins, who runs the Lukins water district.

The profile of the area makes it susceptible to this type of groundwater contamination.