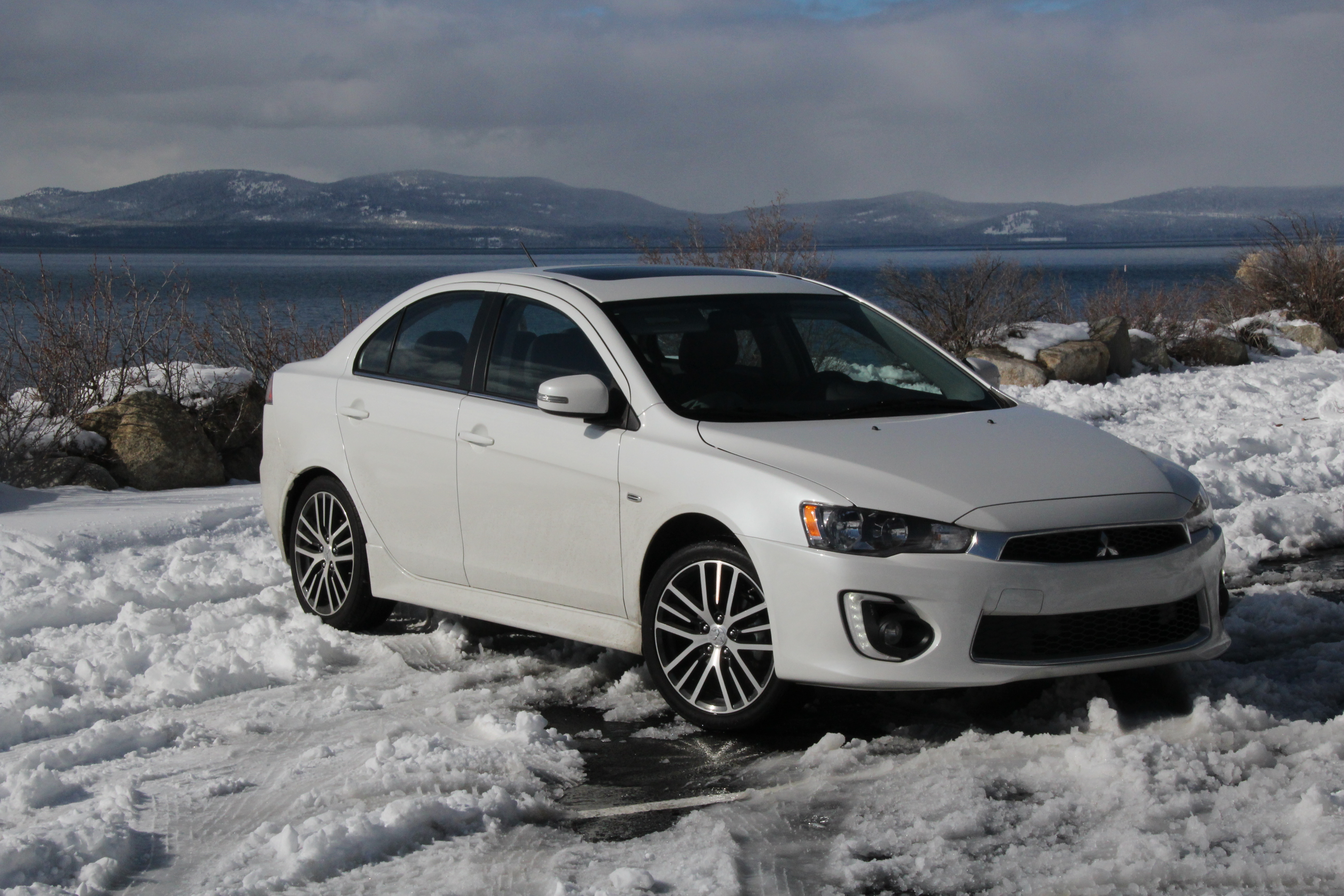 Mitsubishi is back in the game with the 2017 Lancer SEL-AWC. Photos/Larry Weitzman

Since the heyday of Mitsubishi when the 3000 GT and Eclipse were halos to a great line of imported automobiles (actually the popular Eclipse was built in Normal, Ill.), it has had some hard times when it was almost “overrun” by the competition and sales fell dramatically. Now Mitsu is in comeback mode, selling more than 100,000 cars in the last two years and climbing by selling value and competence.

Just today as I write this Road Beat, Mitsubishi is introducing a new model CUV, bringing back the Eclipse name combined with “Cross” taking the name “Eclipse Cross.”

Eclipse Cross is an all-new small very aggressive and sporty CUV. It will be powered by a turbocharged 1.5L GDI inline four or a 2.2L turbocharged common rail diesel both with 8-speed trannies, except the gas engine eight-speed is a CVT designed to act like an eight speeder. Dimensions are 173 x 71 x 66-inches length, width and height with emphasis in its very manageable length and muscular wide stance.  Mitsu’s AWD system, a trick new interior and other features make this ride look very exciting. It should be on the market hopefully later this year.

This leads us to the AWC Mitsubishi Lancer, my test vehicle for the week which uses the same All Wheel Control (AWD) system of the new Eclipse Cross. It does perform beautifully, offering front wheel drive, automatic all-wheel drive. You can lock them up as well, all done with a simple rocker switch in the center of the console. Having made an excursion from Placerville to Carson City with snow on the ground, the AWC provided the grip and drivability almost to make the little Lancer feel invincible in such conditions with superb grip and traction. 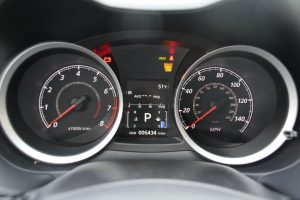 The Lancer’s design while still quite pleasant is in need of a makeover. The original shark nose has become less aggressive, but it is still quite contemporary and non-offensive. I have seen some images of new ideas and some of them are quite stunning as Mitsu remakes its image, especially with a large infusion from Nissan which recently bought a significant interest in the company.

But let’s go to the basics, the engine/transmission. Lancer is powered by its version of a World engine, the 2.4L DOHC, 16 valve inline four that cranks out a respectable 168 hp at 6,000 rpm along with 167 pounds of twist at a low 4,100 meaning that while the engine may not have high peak power, it emphasizes is on mid-range where most people do their driving. The power is sent to the front wheels or all wheels if AWC is selected via a silky CVT tranny.

Performance is a bit improved over my last Lancer AWC review with 0-60 mph happening in a quick (for a compact car) 7.28  seconds and a sprint from 50-70 mph (a simulated pass) required 4.43 seconds and the same run up a steep grade (6-7 percent) slowed that time to 7.28 seconds all quick times for a compact car and close to the performance leader of compacts, the FWD Mazda 3. A year ago, the same AWC Lancer had times of 7.39, 4.59 and 7.77 seconds, respectively. There is no explanation for the slight improvement, the vehicles have identical specs except for the 2017 getting slightly bigger (wider and lower aspect ratio) tires. Both vehicles recorded a low 2,100 rpm at 70 mph.

Throttle response is excellent at all speeds and if you get hard into the throttle, you can really feel the thrust on your backside, making the Lancer a bit of a pocket rocket and fun to drive, like the prior turbo Eclipse or 3000 GT. Nice.

EPA fuel economy is rated at 23/30/26 mpg city/highway/combined. The Lancer averaged 27-28 mpg overall in rural, suburban driving. Not the best for a compact car. In my run over the Sierra to Carson City, which is about a 200-mile round trip with some stop and go and errand running in Carson City, the little Lancer averaged 30.1 mpg for the entire trip. On a level highway with the cruise control set at 70 mph the Lancer averaged 32.8 mpg. These numbers are virtually identical to the Lancer AWC in my prior review. Acceptable, but not great.

But great comes next. This Lancer does corners like water in a hose. First is the state of the art suspension, Mac struts up front and a multilink system holding up the rear, suspension not found in most other compacts. It even has stabilizer bars at both ends. New for 2017 are 18 inch alloys shod with some real meats, 215/45 series tires. Weight balance of its 3,142 pounds is 59/41 front to rear, also better than most other small cars. It has no torque steer either.

Another big difference between Mitsu and the competition is the hydraulic rack and pinion steering (most other cars have an electric power rack). It’s not exactly quick at 3.16 turns lock to lock, but it has the best feel and feedback with respect to the steering of any small car. When you add up the creds, the Mitsu flat out gets it done in the twisties with perfect steering feel on and off center. There is no numbness so characteristic with the competition. Cornering attitude remains reasonably flat and those wide, low profile tires hang on like a vice-grip. And when you combine this with all-wheel drive, the Mitsu flat out performs in the dry, wet and even with some snow. On top of all this is the super-tight 32.8 foot turning circle. Very impressive.

While the ride quality is good and like most other small cars, maybe even a bit suppler, Mitsu suffers from more road noise especially on coarse roads. The engine is quiet enough and the wind noise is de minimus, but the road noise issue could use some work. Mind you it is not obtrusive, I drove the Mitsu 500 miles and enjoyed every mile, it could just be quieter. Maybe adding 10 or 20 pounds of sound deadening would do wonders.

Safety doesn’t take a back seat neither. It has most of the acronyms, ABS, TCS, VSC, TPMS, seven airbags, back up camera and more. Real safety is in the driver’s hands anyway by driving well ahead of your vehicle. Headlights are very good on low and high beam.

Inside is a leather interior, seats, steering wheel and, shift knob. The doors have some soft touch materials but while the IP has all the requisite gauges, big tach and speedo with a center info display for the trip computer and other functions, the twin cowl binnacle is looking a bit dated, although extremely functional. Seats are on the firm side, but do a decent job of holding you in place while tangoing in the twisties. Rear seating is adequate for three as long as I am not in the middle. At 12.3 cubes the trunk is of average size but well-shaped.

Now here is the deal. This top of the line loaded Lancer SEL AWC (AWD) lists for just $22,095 (only a $100 increase from 2016) plus $835 for the boat ride from Kurashiki, Japan. My tester had a $1,500 Sun and Sound package meaning a moon roof and some wazoo 710 watt Rockford Fosgate sound system with a huge subwoofer in the trunk. I still have my hearing. With that sound system and 710 watts, that is almost a horse power of sound (746 watts = a hp). Total Monrony is $24,430. Quite the deal for an AWD loaded compact. I would pass on the sun and sound package and keep my skin and hearing intact. If handling and AWD is your deal, this is your ride.