STATELINE – You could almost hear a pin drop when singer Paul Simon launched “Sound of Silence,” one of the musician-songwriter’s most beloved songs and one of a handful of encores he performed Sunday night for a receptive crowd at Harveys Lake Tahoe to lead off the Outdoor Summer Concert Series.

Simon, who played beyond 10:30pm, provided a music anthology ranging from the tunes of the 1960s with his singing partner Art Garfunkel to a storied solo career in which he reinvented himself in the following decades through African beats and varying culture immersions such as meeting a medicine man in the Amazon of Brazil. 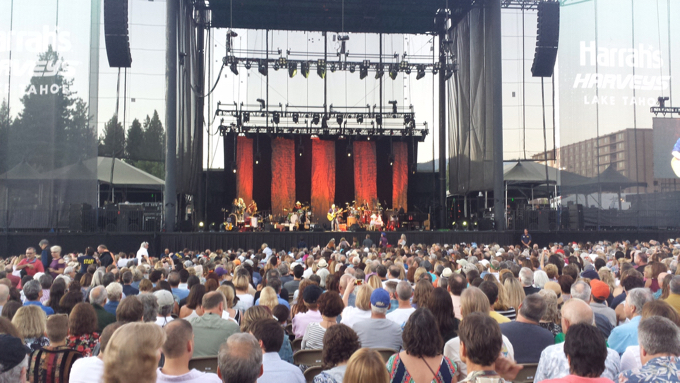 But it was Lake Tahoe with its people and natural setting that embraced the artist June 25.

“There couldn’t be more of a beautiful setting,” said Simon, who came out on stage clad with an understated “Aloha” T-shirt and jeans, along with a hat mostly hanging on the microphone stand that was marked with the letter “e.” The letter is the logo standing for the Half-Earth project as highlighted in Edward Wilson’s eco-conscious book of how to save the planet.

“That book had a profound effect on me,” he told the crowd. So much so that Simon said he pledged all the proceeds from his tour to Wilson’s efforts.

Simon hinted at subtle social activism at various times, including the time he relieved his nine-member band of accomplished percussion, keyboard, bass, string and brass musicians to grab his acoustic guitar for “Sound of Silence.”

“Before I play this song, I’d like to leave you with one thought: ‘Anger is addictive, and we have all become a nation of addicts’,” he said, beckoning the audience to when they hear something to: “Ask yourself: who’s making a profit from this?”

While in agreement with the argument, the audience looked stunned during the 1966 No. 1 blockbuster tune that stayed on Billboard’s top 100 for 143 weeks. It seemed to complement the message.

The singer’s mood appeared to fluctuate – enjoying the rocking out and dancing during the whimsical numbers “You Can Call Me Al” and “50 Ways to Leave Your Lover” as well as the perfectly harmonious “Diamonds on the Souls of Her Shoes” and melodic “Graceland” off the so-named album.

Then, in a change in pace that can turn on a dime, he seemed visibly moved by the crowd reaction to the sentimental, open-road ballads. “The Boxer” off the 1969 “Bridge Over Troubled Water” album and “America” from the 1968 “Bookends” ensemble defined a generation of seekers in the late ’60s. 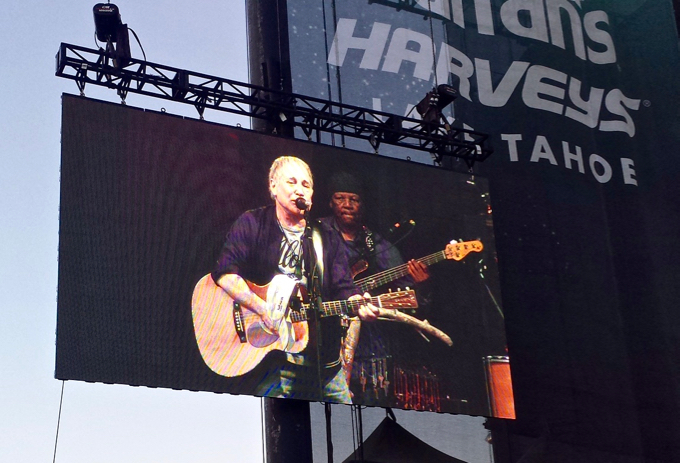 Anyone listening to “America” could have imagined being young and “hopping a Greyhound” to anywhere in search of a utopian nation filled with characters as referenced with “be careful his bow tie is really a camera.” The poetry of the song is what makes the artistry of music so important to generations of citizens.

Thanks to the artists like Simon, we have a creative chronicle of our soul.

Take from the self-titled album the 1972 lead single “Mother and Child Reunion,” which had members of the crowd bobbing up and down. The lyrics were played with equal treatment to the upbeat melody.

And while Simon doesn’t move a lot on stage aside from heavy string-strumming at times, he brings out the songs that perpetuate movement in the audience. It’s almost as if he proves he’s “Still Crazy After All These Years,” as his 1975 number dictates.

“I like it when you dance,” he reminded the audience.

What he doesn’t respond to is the crowd calling out songs as the Tahoe crowd yelled a number of them.

“I don’t do requests,” he said, half kidding.

But he does give the audience what it came to hear, as cited by Bill Pincus of Phoenix.

Pincus told Lake Tahoe News he hoped to hear “Me and Julio Down by the Schoolyard” – the jumpy 1972 hit spawned from a Time magazine article about alleged radical priests.

“I got what I wanted,” the Arizona man said later.

This wasn’t bad for a last minute event for him and his companion Lorah Neville. The couple drove up from Sacramento. Pincus recalled making a music request to her that he wanted to hear “anything Simon and Garfunkel” without knowing Simon was making a rare appearance where they were vacationing at Lake Tahoe.

“What are the chances of that?” Pincus posed the question.

The Harveys Summer Outdoor Concert Series continues June 30 with Rebelution; July 2 with Sammy Hagar; July 9 with Train joined by Natasha Bedingfield and OAR; July 14 with Lenny Kravitz; July 16 with Third Eye Blind; July 28 and 29 with Jack Johnson; Aug. 4 with Slightly Stoopid; Aug. 16 with The Who; Sept. 1 with Linkin Park; and Sept. 2 and 3 with Eric Church.

Previous post : Opinion: Why Calif. taxes go up and up and up Next_post : Swarm of earthquakes shakes Truckee area