Legality is one thing; availability is another when it comes to abortions.

No practitioner performs the procedure in the Lake Tahoe Basin or Truckee. There is one provider in all of Northern Nevada and they are in Reno. Sacramento or Roseville are the closest options in California for those living in the Tahoe-Truckee region.

Norma McCorvey, who led the fight that culminated in the 1973 Supreme Court decision legalizing abortions in the United States, died Feb. 18 at age 69 from heart failure. She was the Roe (Jane Roe) in Roe v. Wade. Up until that court ruling abortions were only legal if the woman’s life was at risk.

In the 44 years since that decision there have been continued attempts to take away a woman’s choice.

There was a time when clinics were bombed and protestors would get in the face of women seeking services. This led to many doctors saying no to offering the procedure.

Now with the threat of those rights being taken away women are starting to fight back. Reproductive rights were a rallying call for many of the millions of women who marched last month, the day after Donald Trump’s inauguration. 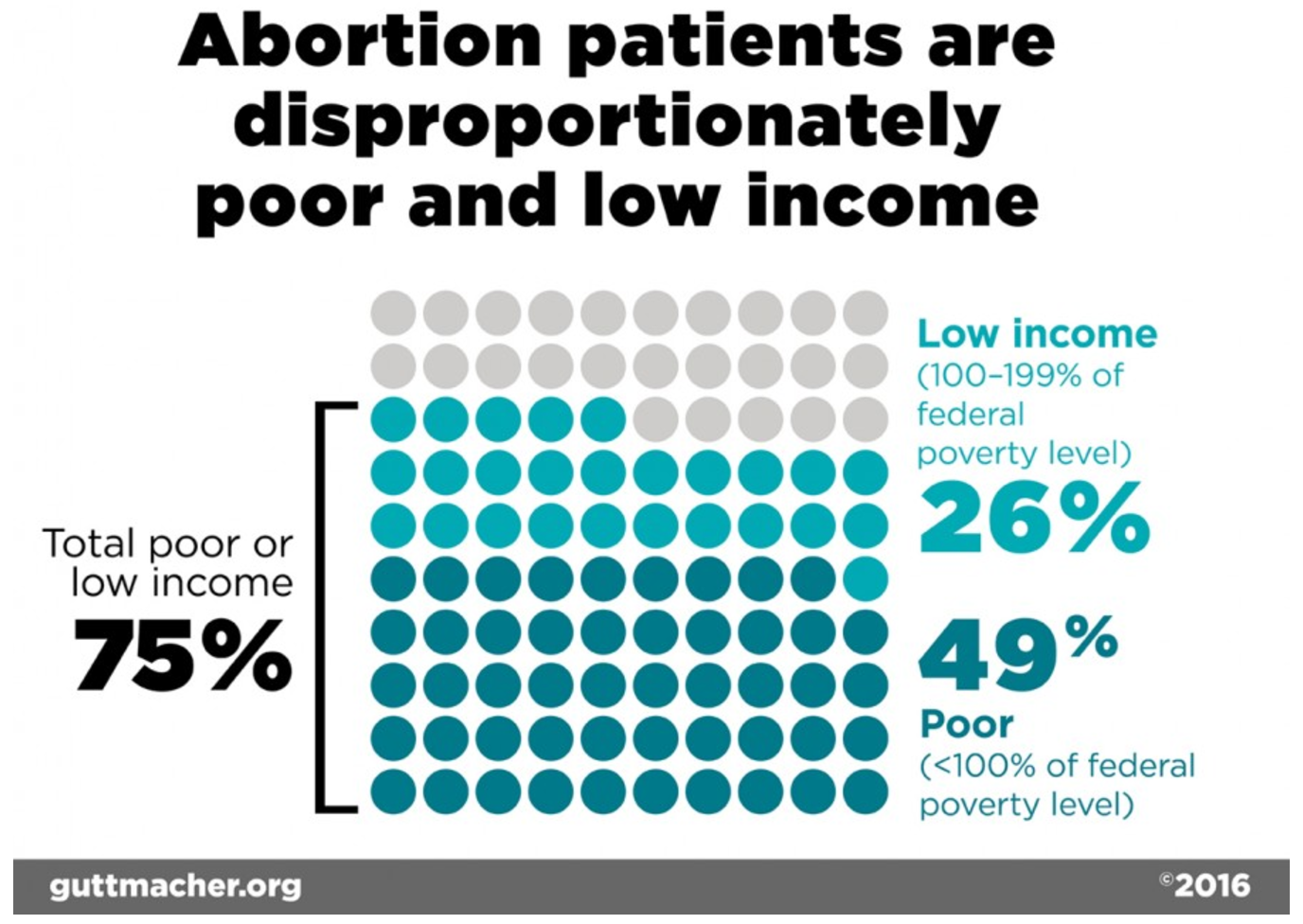 Abortion is a divisive subject, with politics and religion seeming to override all medical discourse.

One of President Trump’s first acts in the Oval Office was to sign an executive order banning aid to foreign entities that provide abortions. In the U.S. it is near impossible to get Medicaid to pay for an abortion. Funding to Planned Parenthood is threatened with Republicans controlling both houses of Congress even though less than 3 percent of the agency’s services are related to abortions. Planned Parenthood in 2014 performed more than 30 percent of the abortions in the United States.

Planned Parenthood in Reno has not offered abortions since July 2015 because no doctors would be part of the practice.

“It is a frightening landscape we are looking at,” Daela Gibson with Planned Parenthood in Reno told Lake Tahoe News. “It is getting more difficult for women to get health care and it is definitely going to get more difficult if the current administration continues on this path.”

West End Women’s Medical Group in Reno is the only place in Northern Nevada that provides abortions. They would not provide stats to Lake Tahoe News, but the agency has to give them to the state.

According to the Nevada Department of Health and Human Services, from 2011-14 there were 141 reported abortions in Northern Nevada, with 3.2 percent of the women coming from the Tahoe area. Statistics are kept by ZIP code. In that time period women from Crystal Bay, Glenbrook, Zephyr Cove, Stateline, Incline Village, Carnelian Bay, Homewood, Tahoma, Kings Beach, Tahoe City, Tahoe Vista and South Lake Tahoe received an abortion at West End.

Those from California going to West End must pay cash – more than $700. This can be cost prohibitive for many.

California Department of Public Health did not return multiple calls. 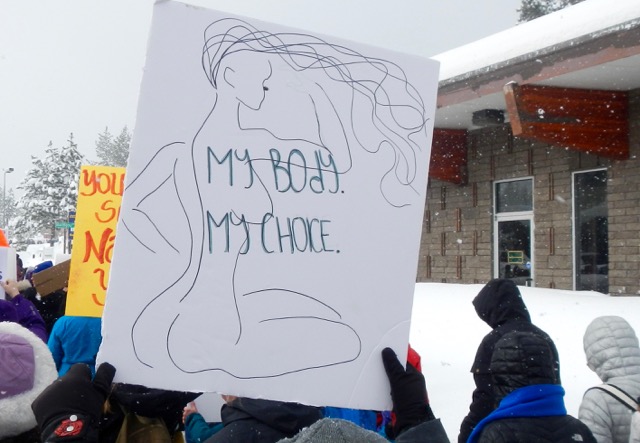 One of several signs about women’s reproductive rights a the bistate women’s march on the South Shore on Jan. 21. Photo/Kathryn Reed

Getting to Sacramento can be a logistical obstacle, especially for younger girls. (In California parental consent is not required to get an abortion.) There are different procedures, with the number of weeks a woman is pregnant determining what is done. Sometimes a follow-up visit is required, which compounds the difficulty for some people.

Income is another hurdle in the quest to terminate a pregnancy.

The morning after pill is an alternative at least in the first 48 hours after intercourse. While abortion medication is available through the Internet, this is not the route health care professionals prefer. Deciding to get an abortion is an emotional decision with potentially lingering psychological ramifications. Having someone to talk to, to provide counsel, to explain what to expect is part of the process at a clinic or doctor’s office.

“We would rather them be under doctor’s care or health clinic care and receive guidance instead of trying to handle such a difficult situation on their own,” Gibson said. 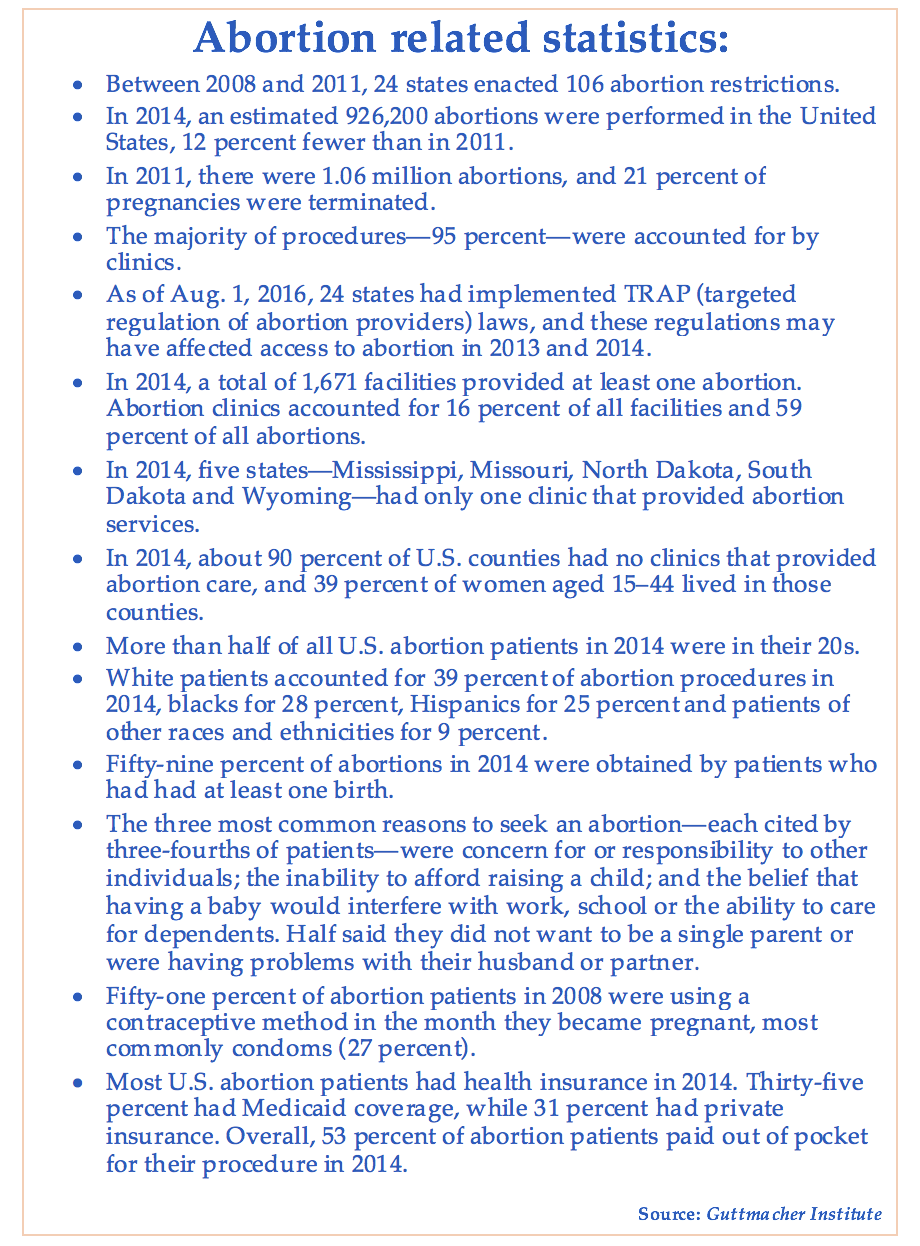 For Nichole Delaplante, a doctor with Barton Family Medicine, she talks to her patients about the options and the psychological aspects of abortion. “I give them information where they can safely and privately get an abortion.”

“We need accessible family planning services so abortion does not have to be an option,” Chris Cifelli, a nurse who has been a family planning provider for more than 30 years, told Lake Tahoe News. She works in South Lake Tahoe, Truckee and Reno.

Schools offer some assistance to students, but it’s a delicate topic between school nurse and student.

“In Placer county we are very neutral about women’s health choices. We work with people to help them figure out if we have resources to help them or if they need to get somewhere else,” Maureen Bauman, with Placer County Public Health, told Lake Tahoe News.

While Barton Community Health Center is listed as a referral by El Dorado County Public Health, the center does not do abortions, and never has, according to an employee.

Barton Health would not provide any historical numbers for abortions, and instead told Lake Tahoe News to check with the Centers for Disease Control and Prevention for stats.

CDC’s response was, “California does not report data on abortions to CDC, so we do not have state-specific data to offer.”

When presented with that information, Mindi Befu, chief spokeswoman for Barton told Lake Tahoe News, “Barton respects the privacy and confidentiality of its patients and community and does not release this information.”

Discussing abortion with Barton’s public relations folks was difficult, with few direct answers given. But stats about births, those are available and easy to come by.

Barton flacks didn’t even know doctors affiliated with the hospital don’t perform abortions any more. There was a time when Barton docs would do them in their offices, but that doesn’t happen anymore. (A doctor in Truckee performed abortions years ago in his office, too.)

When abortions were performed at Barton Memorial Hospital in South Lake Tahoe it was for medical reasons.

With Barton employing most of the doctors on the South Shore, as opposed to there being independent offices – which was the case even five years ago, the conglomerate has a monopoly on the local medical profession and can dictate (even if it’s not in writing) policy.

“We don’t have any providers. Either they are not trained or they don’t want to (perform abortions),” Barton Family Medicine’s Delaplante told Lake Tahoe News.