Snow is the word of the day in Lake Tahoe and will be through Thursday. Photo/Susan Wood

Liberty Utilities was able to do some switching and get part of South Lake Tahoe out of the dark. About 1,726 customers on the lake side of Highway 50 in the Al Tahoe neighborhood are still without power.

The North Tahoe Event Center shelter in Kings Beach is closed because of a power outage. Officials are encouraging people seek shelter a hotel or casino.

Another avalanche in the 1800 block of Alpine Meadows Road has closed that area.

Weather is getting more severe and lines are going out at a rapid rate, according to Liberty Utilities.

“We have lost a major line which feeds most communities along Highway 89 up through Loyalton and Portola. With I-80 closed, we have sent a crew on snowcat to the probably problem; they are expected to arrive on scene by 1am,” spokeswoman Kathy Carter said in a statement.

Tahoe City is also experiencing outages with no restoration time estimated yet.

Some regions may experience flash outages that can be repaired quickly throughout the evening if accessible.

A tree branch that fell on a primary wire on Sundown Trail in the unincorporated area of El Dorado County has 2,316 customers in the dark. Crews are on site, but there is no estimated time when power will be restored.

Garbage service in the basin may be slower or delayed throughout the basin because of unplowed roads.

Meyers is in the dark, as is a large swath of South Lake Tahoe. Liberty Utilities crews are on in the area trying to determine the cause.

For people in custody who were supposed to go to court in South Lake Tahoe on Tuesday or Wednesday today or their cases will be heard on Thursday. All other cases will be rescheduled. Individuals who are represented by lawyers should contact that individual’s office. Court users can may call 530.621.7414 ater 8am Wednesday.

With 126 inches of snow in the first 10 days of 2017, Squaw-Alpine is already at 181 percent of their January average. On Tuesday the resorts received 29 inches in about 12 hours. If conditions allow, both resorts will be open with a limited number of lifts.

Blizzard and flooding conditions are expected to continue through the night in the basin.

Highway 50 is closed from Meyers to Sly Park because of avalanche threat. The estimated time to open is 3am Wednesday.

Residents in the Crystal Bay area are advised to stay indoors until further notice. Avalanches large enough to break trees and move cars have occurred in Crystal Bay under similar storm circumstances. This advisory may last for the next 24 hours, or longer, depending on how long the storm lasts. Road crews will not be plowing streets in the avalanche-danger area until further notice. Cornices along the ridge above Crystal Bay will be getting large enough to fall off their own weight and trigger long-running avalanches that could reach the homes below. Wind speeds and snowfall rates are increasing dramatically.

El Dorado County has declared a state of emergency due to damage to local infrastructure.

There is some structural damage to about a dozen houses that were hit by an avalanche Tuesday morning on Alpine Meadows Road, but no foundational issues have been found.

Residents of the southwest Donner Lake area along Washoe Circle, Conifer Drive, and parts of South Shore Drive are advised that a high avalanche danger exists and they may want to evacuate. These conditions are expected to remain for the next few days.

“Even though there are many areas of heavy forest above these homes, avalanches can run into areas of mature forest,” Truckee fire personnel said in a statement.

A backcountry avalanche warning is in effect in the Truckee -Tahoe area. Travel in avalanche terrain, on or below slopes 30 degrees and steeper is not recommended.

Cannons have been going off most of the day; set off by highway departments and ski resorts to reduce the threat of avalanche. This has meant Highway 50 between Meyers and Placerville had been open intermittently. It is currently closed because of several snow slides.

Motorists are being advised to avoid the area of Alder Creek Road between Schussing and Wolfgang in Truckee because of minor flooding.

All roads in Douglas County are open except of Kingsbury Grade between Foothill Road and Tramway.

El Dorado County has closed the Cosumnes Mine Road bridge where it crosses the North Fork of the Cosumnes River. Water has washed away the soil from under the north bridge approach.

Lake Tahoe Unified will be closed on Wednesday, as will the courts in South Lake Tahoe. The court expects to be open Thursday. Check the website for updates.

Truckee’s town council meeting has been moved to Jan. 12 at 6pm.

Liberty Utilities is still working on trying to restore power to people throughout the region. 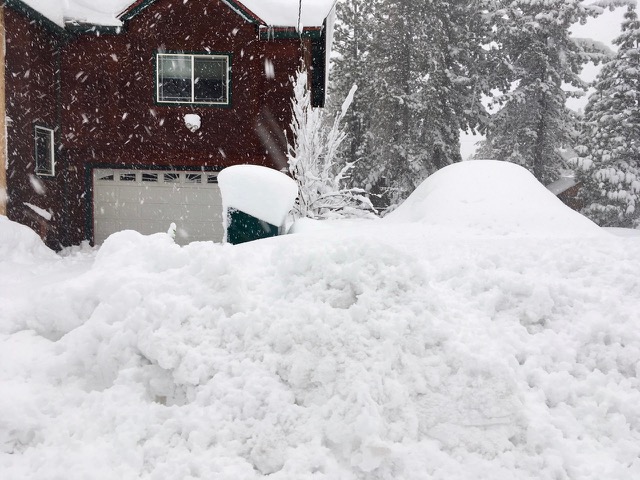 Berms several feet high are being left on streets in Meyers. Photo/Kim Wyatt

More than a dozen houses were hit by an avalanche at 11:40 this morning on Alpine Meadows Road. No injuries have been reported.

“It’s still an unstable situation. There is still avalanche danger throughout the district and the basin,” Beth Kenna with North Tahoe Fire told Lake Tahoe News.

The extent of damage is being assessed.

Alpine and Squaw were closed today.

Sugar Bowl is closed because of the Interstate 80 being closed. The resort as of 1:45pm was reporting a 44-inch storm total so far, with 20 inches falling in the last 24 hours. There is not estimated time for I-80 to reopen.

Highway 50 has been closed on and off because of avalanche control.

Highway 267 is closed because of blizzard conditions.

For current road conditions, click on the state icons on the home page of Lake Tahoe News.

In South Lake Tahoe, Heavenly was encouraging people to ski while at the same time the city of South Lake Tahoe — as well as every transportation authority, including the two states — were telling people not to travel. The city told non-essential workers they did not have to work on Tuesday. This essentially means the city is closed for business.

In the city and El Dorado County the plows are working the main streets and not the residential areas. This is more for public safety concerns. Residents should not expect to see a plow on Jan. 10 unless they are on a main route.

The Rubicon Trail is also closed due to hazardous conditions. Conditions will be reassessed on Friday.

Due to treacherous weather conditions, Liberty Utilities has closed its walk-in and call center offices in Tahoe Vista and South Lake Tahoe.  With approximately 2,000 customers still without power, crews are  trying to make repairs although they are hampered by unsafe conditions, including avalanche danger.

“With heavy snow comes roof snow shedding, which could trap anyone underneath it. Make sure you or any family members stay away from any potential roof shedding areas,” warns Truckee fire officials.

According to the National Oceanic and Atmospheric Administration, “A blizzard warning has been issued for the Sierra through Wednesday morning. Dangerous and potentially life threatening blizzard conditions are possible in the Sierra Mountains. Multiple feet of snowfall are expected. Strong winds will produce zero visibility in whiteout conditions along with high drifting snow. Do not attempt to travel as first responders may not be able to rescue you. Travel may already be impossible with several road closures due to heavy snow already being reported. Even a short walk could be deadly if you become disoriented. Avalanche danger will remain high through this storm.” 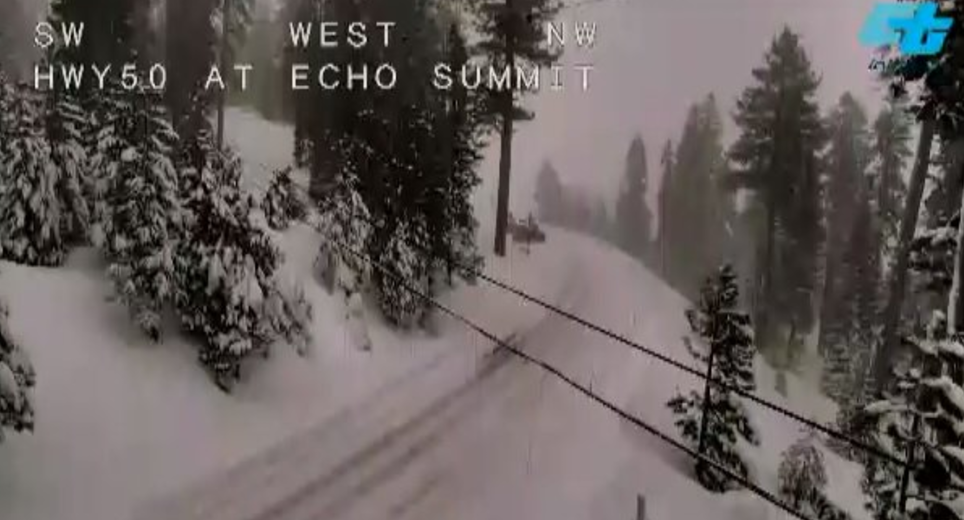 This is Echo Summit on Jan. 10. Photo/Caltrans

The South Lake Tahoe branch of the El Dorado County Superior Court will be closed is closed for Tuesday. Cases scheduled for today will be trailed until Wednesday, and there may have a delayed start time. Court users need to check the court website for further information and instructions.

Blizzard and avalanche warnings for the Sierra are in effect through Wednesday per the National Weather Service in Reno.

About 18 inches of snow have fallen on the South Shore in the last 24 hours, which is impacting travel. Several feet are in the forecast through Thursday.

Non-essential El Dorado County employees in the basin do not have to go to work.

Liberty Utilities rebuilt a major transmission line Monday that serves the West Shore. This brought power back to all but about 50 customers along Highway 89 between Squaw Valley and Truckee.

Avalanche control is going on Highway 50 in the Echo Summit area so traffic is being held.