It was like the 1960s all over again Saturday – with a mountain twist.

More than 500 women and their supporters in the South Lake Tahoe region braved the elements to show how advocating women’s rights is not for the faint of heart or the body.

Blowing snow, winter boots, parkas and cross country skis on some participants made the bi-state, high-altitude 2-mile-plus march unique as it wove along Highway 50 from the Hard Rock at Stateline past Lakeview Commons at midtown to the South Lake Tahoe Senior Center. 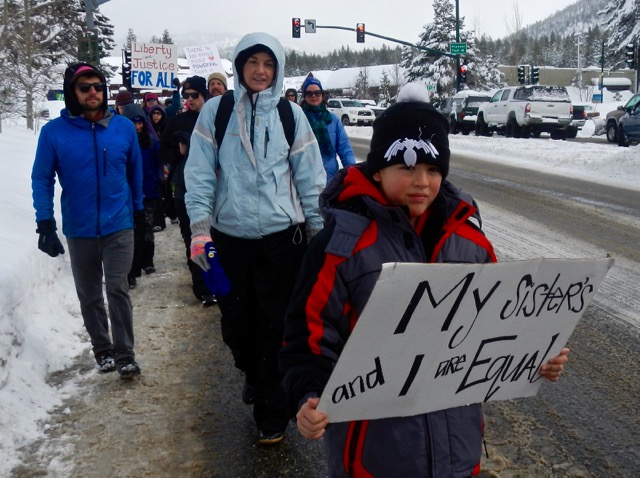 Kayden Morales, 8, wants his three younger sisters to have the same opportunities he has. Photo/Kathryn Reed

The resilient mass of mountain women, children and men joined millions of sisters in arms at walks that took place around the world in an act of peaceful solidarity on Jan. 21. A million women were expected to march on Washington, D.C., alone to demonstrate their defiance over what’s perceived as a threat to their reproductive rights and other aspects of their lives because of their gender – all because of the 45th president of the United States.

Ironically, Sunday marks the 44th anniversary of Roe vs. Wade, the landmark U.S. Supreme Court decision that ultimately gave women the right to choose to end their pregnancy in a medically safe environment. 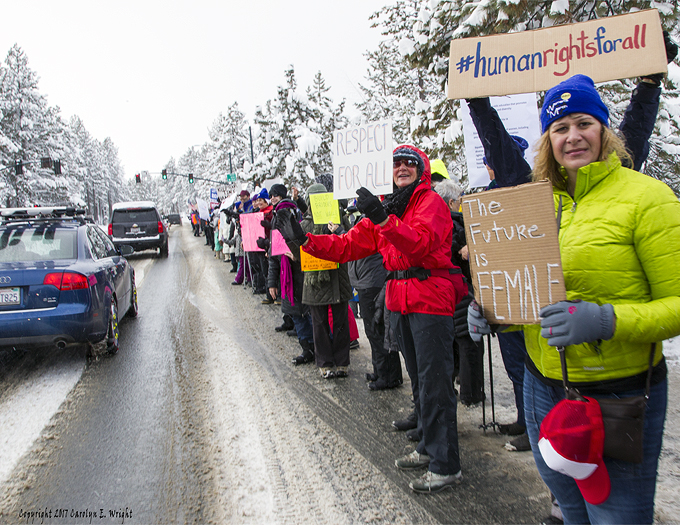 The women of South Lake Tahoe’s opinions and signs were as diverse as our nation. The constant message – treat women and men equally.

“I’m here to support my community. It’s important to be a part of this global event. It means we’re done with being discriminated against and isolated. The world is coming together,” Lori Cramer said, while she launched her march from the Hard Rock parking lot.

She was not alone.

“I am just hoping to make a statement regarding our values that make our country great,” Janice Eastburn said, while holding a sign that read: “Love makes America great.”

She listed freedom, compassion, love and dignity as worthwhile goals for humanity.

“And I’ll continue fighting for these values through this president and through the rest of my life,” she said. 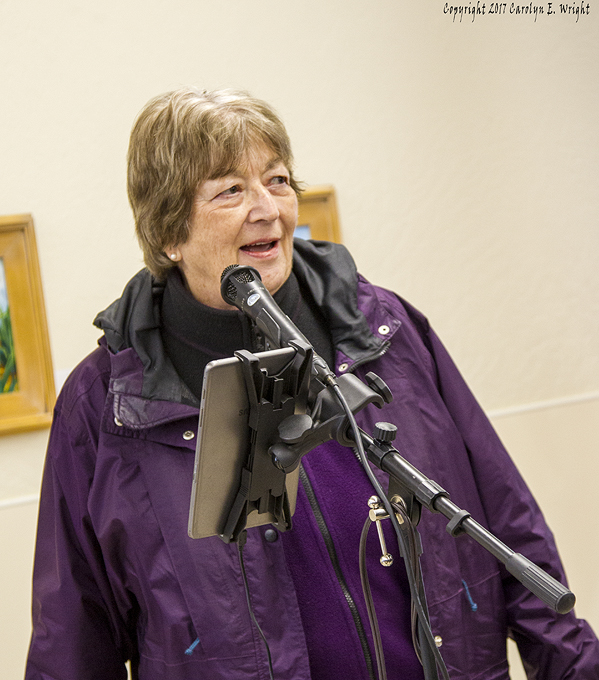 Longtime South Lake Tahoe resident Peg Kortes talks of the fight it took women to get the rights that are now being threatened by the current administration. Photo Copyright 2017 Carolyn E. Wright

The unified message not only got through to the mass of walkers. Honking in support from a long line of vehicles on Highway 50 resonated throughout the march.

A very excited Naylet Martinez of Santa Clara hung out the window of the honking vehicle she was in, taking pictures.

“Do you feel like you’re part of the parade?” Lake Tahoe News asked.

Ditto from local Whisper Krimmer, who didn’t make it in time to get to the starting point – but had an excellent vantage point of the long line of marchers from her vehicle. 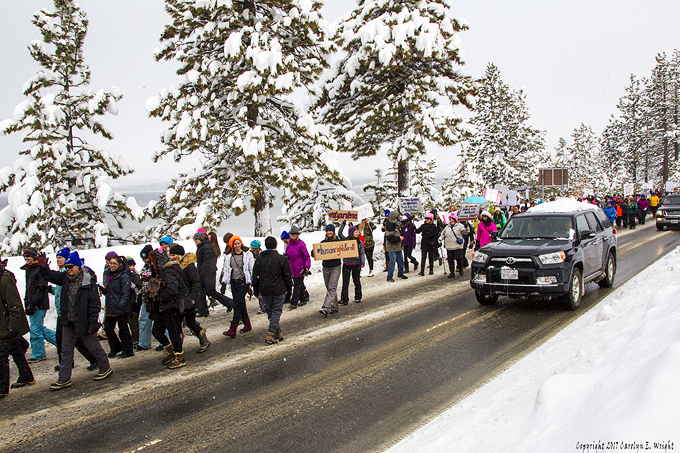 People from all walks of life took part in hitting the streets. Some parents brought their youngsters as a history lesson in different stages of activism in our democracy.

“I wanted to show them how they can use their voices to be heard by those who make the rules in telling them what we want,” Erin Buck said, while marching with husband Josh and daughters Winter, 7, and Elin, 5. The youngest was holding one of several creative signs. Hers said: “Girls can be president.”

Jane Frame intended to show the same example. Her daughters Liberty, 8, and Sierra, 10, took the sentimental approach – holding a sign that read: “I wish with all my might to be treated right.” 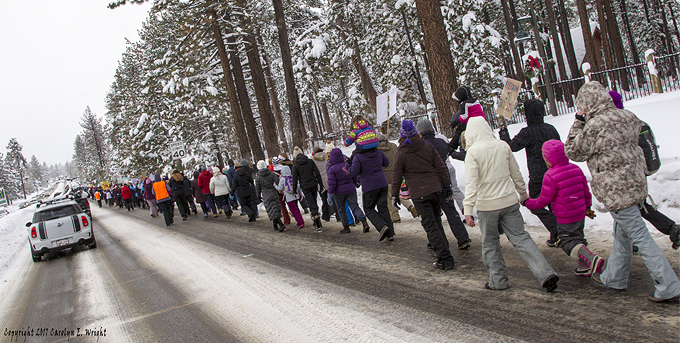 Peacefully people march along Highway 50 on Jan. 21 in support of equality for all. Photo Copyright 2017 Carolyn E. Wright

As a tourist bus going by honked loudly, Frame explained she had a discussion with her offspring about why they were marching – and the girls agreed to it.

Sierra looked up with piercing eyes and belted out: “Women don’t get paid enough.”

And lest we forget how far the women’s movement has come.

Jenny Hdariis and Leo Singer from Carson City were carrying a “Battleborn” Nevada banner and provided Lake Tahoe News with a moving tribute to the U.S. women’s movement. 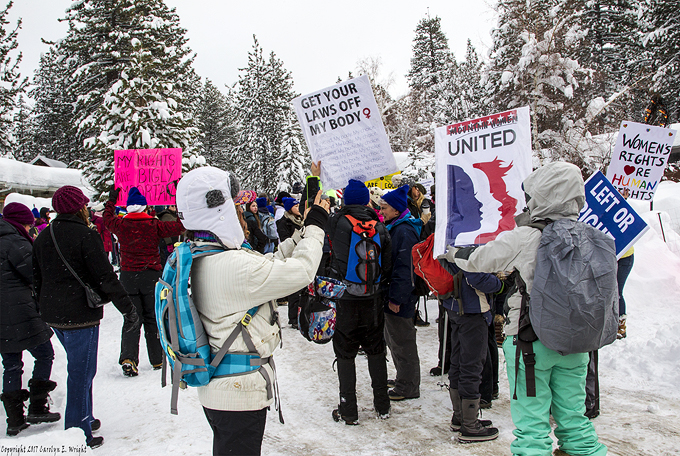 The couple originally hails from the Middle East.

“We took it for granted all the women’s rights we have. At least we have them,” she said, calling the latest in a series of threats toward women’s benefits such as Planned Parenthood “a wake-up call.”

In Jordan, Hdariis felt she never had rights. So when a U.S. election emerges in which references to women being equated to chattel from elected leaders in high office are made, she takes offense to women resting on their laurels.

Her Israeli husband was right alongside her. He took to Hebrew in sharing his thoughts of the recent diatribe associated with the presidential campaign.

“There’s a saying we have that when the head feels pain, the whole body suffers. When the leading country of the free world suffers, the whole world suffers,” he said, while passing cheering supporters on the second-floor balcony of their Lake Tahoe Vacation Resort unit at Ski Run Boulevard.

In other words, women’s plights are human plights – which afflict the whole world. 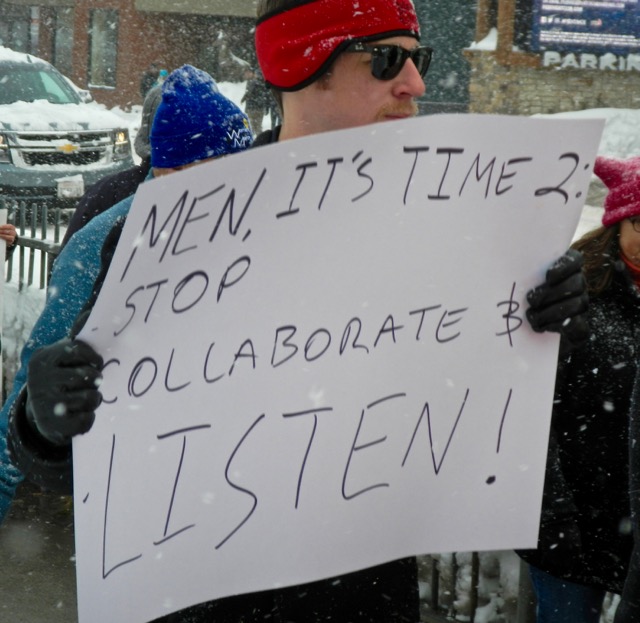 Allen Strickland Williams, who is in town performing at the Improv Comedy Club, said marching “is a positive way to cope and process and commiserate with what’s going on.” Photo/Kathryn Reed

“I support our democracy. Even though (President Donald Trump) is not who we voted for. I still wish the best for our country,” Singer said.

Cara Battalico, 33, of South Lake Tahoe was a little more biting and specific with her expectations of the man who took office Friday and the cabinet he is assembling.

In a passionate plea, she listed immigration and women’s reproductive rights as being issues she has no intention of seeing returning to the Middle Ages. She doesn’t want to compromise with what is deemed as the most conservative federal government in modern times – from the executive to legislative branches.

“I thought we were passed this s—,” she said of what the pioneers of woman’s suffrage accomplished. “We are not going to go back. We are only going forward. I’m here to raise awareness – no matter what the weather,” she added, giggling over the tufts of snow and slush.

Battalico held a cerebral sign that read: “Examine what you tolerate.” It appeared she was prepared to take on the “never go back” cause in which women performed back-alley abortions and had fewer rights in comparison to their husbands.

Her husband, Jesse Mancillas of South Lake Tahoe, had been wrestling with issues of his own – trying to hear the opposing political views of his family without arguing. Being the progressive he is, Mancillas proudly waved a sign that identified him as “Men of quality don’t fear equality.” 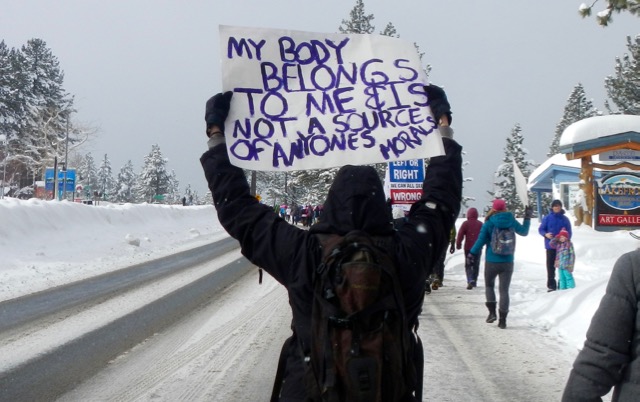 The signs of the days were the signs of entering an era anticipated to be hard-fought and grueling.

Signs read: “Proud to be a nasty woman,” “Our rights are not up for grabs,” “Left or right, we all see wrong,” “Vagina power,” “Pussies in formation,” “No grope zone,” “Tweet women with respect,” “I believe in Planned Parenthood” and others.

One woman carried a wooden sign of a bear that read: “Mamma bear marches for human rights.” Another carried the American flag to get her point across.

The chants were just as creative and intense “Love not hate makes America great.” “What do we want? Equality. When do we want it? Now.”

The demonstration was reminiscent to the gay rights, black and women’s movements.

“I think we’re in for a hail storm (of a resurgence) like we’ve never seen before,” South Lake Tahoe businesswoman Debbie Brown said, while gliding on her cross country skis. “Think about this. We had a blizzard going on, and I thought we’d have 12 people. Look at this – hundreds (of people).”

“This is so much fun – cathartic,” longtime local Sandy Myron described the march.

“South Lake Tahoe women, you rock,” City Councilwoman and Soroptimist member Brooke Laine yelled out with a fist pump to the energized crowd of women and their supporters gathered at the Senior Center.

Laine didn’t even flinch at saying she expected hundreds of people – despite the weather.

“I can truly say I’m the only Puerto Rican woman to walk (today in all the marches) through a snowstorm,” former El Dorado County Supervisor Norma Santiago quipped.

While she did so, Santiago shared that she came out to “send a clear message that the strength of our community lies in our diversity and commitment to constitutional values.”

Stuck in the snowbank at the center was the Soroptimist sign that read: “We recognize that in our vibrant and diverse community lie our strength….”

The banner read like a testament to all who have stood together in times that try men and women’s souls. 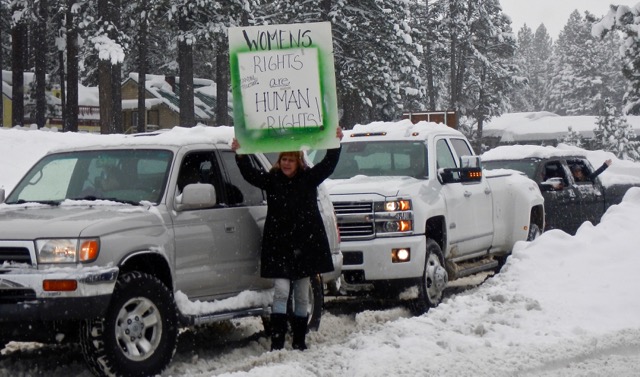 Charlene Jones got out of her car on Highway 50 at Ski Run Boulevard, blocked traffic and made her opinion known — Womens’ Rights are Human Rights. Photo/Kathryn Reed

One such person who knows all about those times – Peggy Kortes — addressed the crowd to provide a history lesson of the women’s movement.

“There have always been obstacles. This is just part of the mix,” Kortes laid out to the assembly of willing listeners.

Take those critical years. Although women were allowed the right to vote in 1920 when ratified, it came with an asterisk for black women – who essentially gained the freedom in 1965. Seven years later, another milestone tested women.

“The Equal Rights Amendment was difficult because women couldn’t figure out what it meant,” she said.

So, we may have come a long way baby – but perhaps not far enough.

·      Women have advocated for their rights for a long time.

·      Democracy is threatened when we sit back and take the system for granted.

The segue was ideal for Annie Davidson’s appeal for women wanting to channel the energy gained by the day to get involved.

“If you take that chairlift up and look out at that beautiful lake and care about the Earth, then get involved,” she said, as her daughter, Miri, 6, hugged her mother.

“Care” is right within women’s nature, Davidson explained – in how we care for children, families, the environment and humanity.

“This is our time for women in America. We have an important history in the things we know. We’ve been controlled in the past and had to take direction from our husbands and our leaders. I want all our girls to be in a position to take control of their own voices. The most important thing is to get involved,” she said.