Neighbors on Ski Run Boulevard have long endeavored to set themselves apart from other areas of South Lake Tahoe. It’s a community within a community.

Nice, wide, paved, plowed and lighted sidewalks are inviting to walk on. Even the street itself is wider than many – giving it that feel of a true boulevard. A mix of commercial interests are interspersed up and down the street.

Depending on the time of year banners or plants hang from the light posts. The vibe is friendly and welcoming.

The holiday stroll on Sunday will be the latest event to bring people outside that one street to the neighborhood.

“We feel like the energy is starting to change in South Lake Tahoe, and a lot of young people are interested in making change and being involved,” Teresa Bertrand, who owns BioSpirit Massage on Ski Run, told Lake Tahoe News. 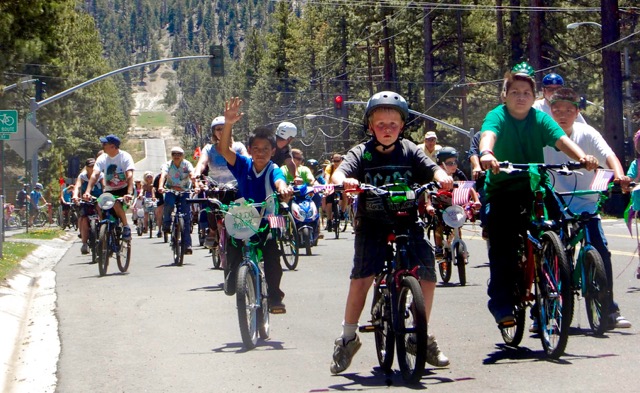 Ski Run plans to have more events like the bike parade a few years ago. Photo/LTN file

This energy spurred the idea for the stroll on Dec. 11. Wanting to gear it toward locals is why it’s on a Sunday. It will be from 3:30-5:30pm on both sides of the boulevard between Alder and Tamarack streets. Ski Run will remain open.

Carolers will be singing at various locations – with those in attendance welcome to participate. Santa has cleared his schedule in order to be at Chimayo restaurant between 4:15 and 5:30pm.

Plenty of hot chocolate will help ward off the cold temps – stop by Blue Angel, Chimayo or Nepheles.

Free face painting will take place at Blue Angel. Non-perishable donations for Bread & Broth are being accepted at The Alder Inn.

“We don’t really have neighborhood pockets up here outside of Highway 50 where it feels genuinely homey,” Jeff Cowen, owner of Blue Angel Café, told Lake Tahoe News. He added that events help introduce people to the street and reminds others what all the area has to offer.

Ski Run activities are overseen by two entities. The business improvement district is operated by those who live or have a business on the boulevard. An assessment pays for the beautification of the area. The Friends of Ski Run have a permit with the city to operate events like the holiday stroll.

The permit can be used by people outside of Ski Run, but those on the street have the first say of approving any activity before city officials weigh in. The non-snowy seasons are easiest for the events because of the amount of traffic the street gets with skiers going to Heavenly.

With those on the street being busy, they are now starting to make a concerted effort to get others to bring events to Ski Run. While there was a big slip-and-slide there this summer, because it was above Pioneer Trail, it did not fall under the umbrella of the Ski Run group. Nonetheless, the Tahoe Regional Young Professionals, who brought in the slide, got the blessing of the folks on Ski Run before proceedings.

It’s more of these outside the box events the Ski Run activists would like to attract. Traditional events are good, too, like the annual Friday farmers markets in the summer.

The Ski Run folks would like to reduce the 35 mph speed limit to make it even more friendly; that 35 tends to mean people go 40 or 45 mph. Talks have been off and on with the city. Flashing signs might be a compromise to try to get people to slow down.

The group in 2010 launched “on the run” as a slogan; with events like Dogs on the Run incorporating that moniker. The enthusiasm waned a bit and now a resurgence is under way to make Ski Run Boulevard the place to be for locals and visitors.

Previous post : Opinion: What do birds hear when they sing? Next_post : Basic rules for snowplow safety