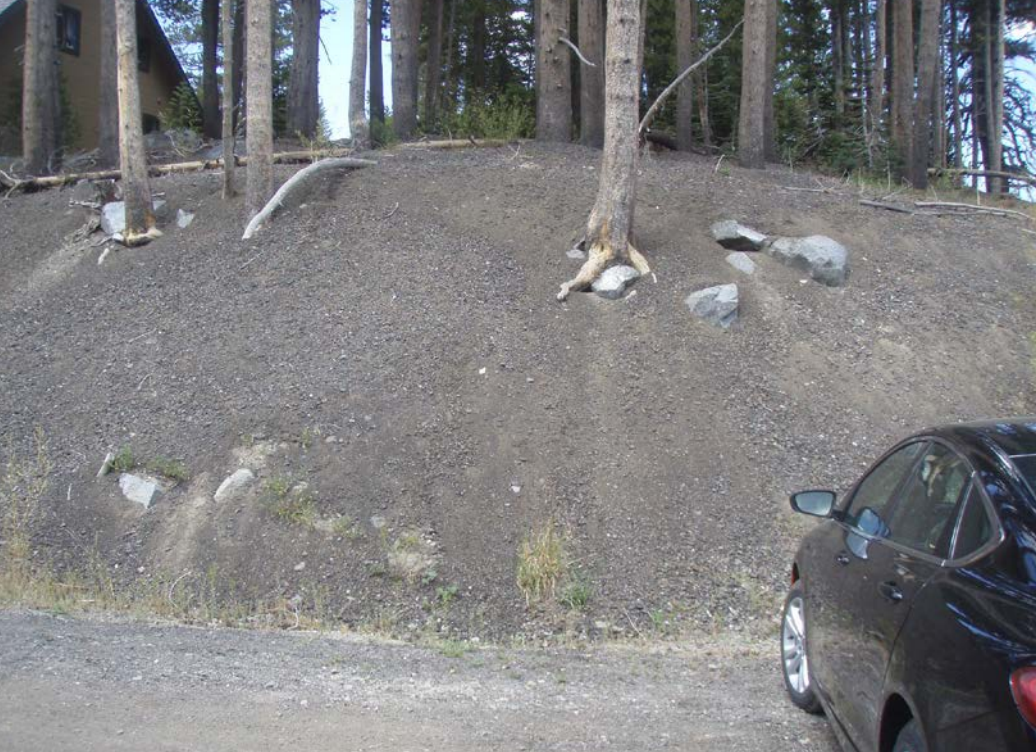 A slope at the parking lot of Kirkwood’s cross country ski area is covered with asphalt grindings that were blown there during snow removal operations. Photo/Provided

Vail Resorts’ Alpine-Amador county ski resort known for its deep snow got out of deep trouble with the state water board this ski season by reaching a tentative settlement to clean up the parking areas adjoining Kirkwood Creek and wetlands. The environmental agency had found asphalt grindings were contaminating sensitive zones.

Upon a tip, the Central Valley Regional Water Quality Control Board found Kirkwood Mountain Resort staff spread the petroleum-based grindings measuring between 2- and 4-inches in diameter in the Timber Creek, Nordic Center and Red Cliffs areas. Specifically, the resort used the gravelly mixture in the parking lots at chairs 7 and 9 (TC Express and Funny Bunny, respectively) and the Red Cliffs Day Lodge, as well as in nearby maintenance yards.

In October, Vail was facing a $4.44 million fine in civil liabilities for a violation of the Federal Clean Water Act and the California Water Code. The practices and subsequent legal wrangling date back to the 2014-15 season.

The California Department of Fish and Wildlife described one of the wetlands and creek areas as “a black snow field.” The agency informed Lake Tahoe News that the asphalt-laced snow removal resulted in no fish kill in the creek.

The two parties reached a preliminary agreement a few weeks ago after the board staff made a Nov. 9 site visit and determined the ski area was implementing best management practices in its restoration efforts. 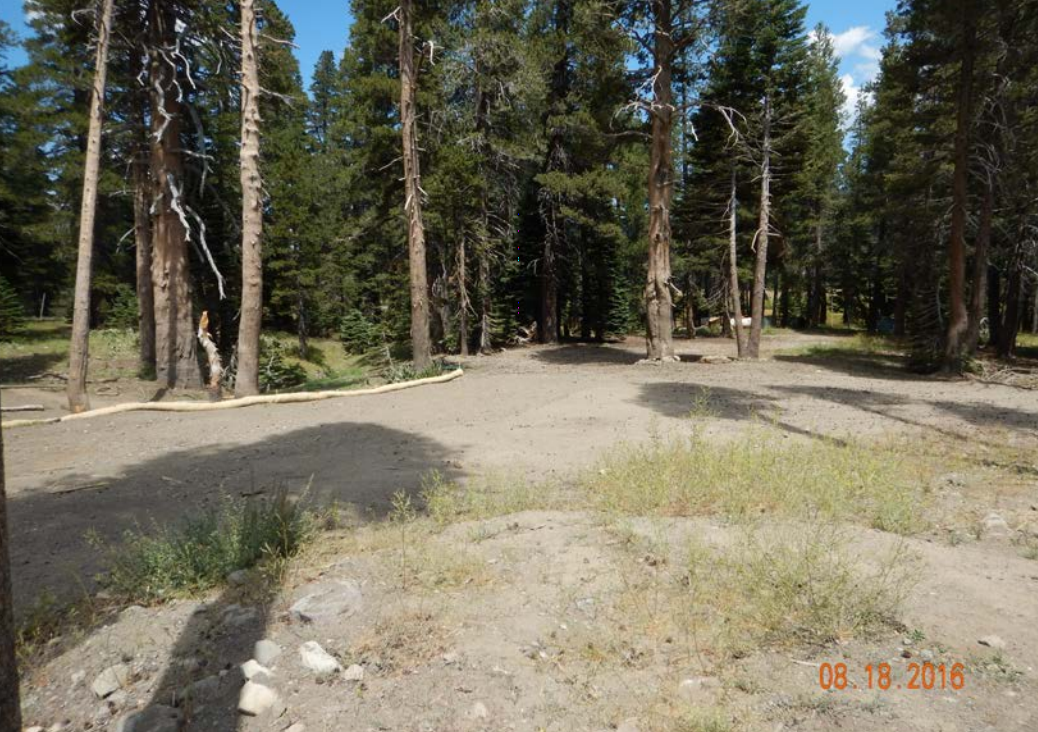 This area has been cleaned-up and is ready for restoration. Kirkwood is proposing to use this area for snow storage. The water board and CDFW staff have concerns based on its proximity to the meadow. Photo/Provided

Roughly 700 cubic yards of debris were collected in the off-season restoration, which equates to 70 loads in a standard dump truck, water board Assistant Executive Officer Andrew Altevogt reported.

“They’ve done as much as they can do this year,” Altevogt told LTN on a conference call with the water board’s environmental project manager Wendy Wyels. His main concern lies in the surface and ground water quality. The duo has been compiling reams of documents related to the contaminants pulled from the California Department of Transportation’s resurfacing piles from Highway 88.

The site visit produced an additional finding of asphalt grindings discharged into the creek near Chair 1 “Snowkirk” and “evidence of erosion was observed in the drainage between the lower Red Cliffs parking lot on the east side of Kirkwood Meadows Drive,” a report written by water resource control engineer Mike Fischer stated. “Board staff recommended that the drainage be stabilized.”

Overall though, the clean-up work plan appears headed in the right direction.

One example: a barrier made of concrete bin blocks was installed on the north end of the parking lot to block access and snow storage in the area closest to the meadow.

Vail brought in San Francisco-based Kennedy/Jenks Consultants to oversee the cleanup operation. It noted Kirkwood staff performed removal of the grindings by hand in the meadow – a mitigation that took hours to complete.

A full assessment of the ongoing efforts will be made next spring because the ski season bore down on work crews this year. 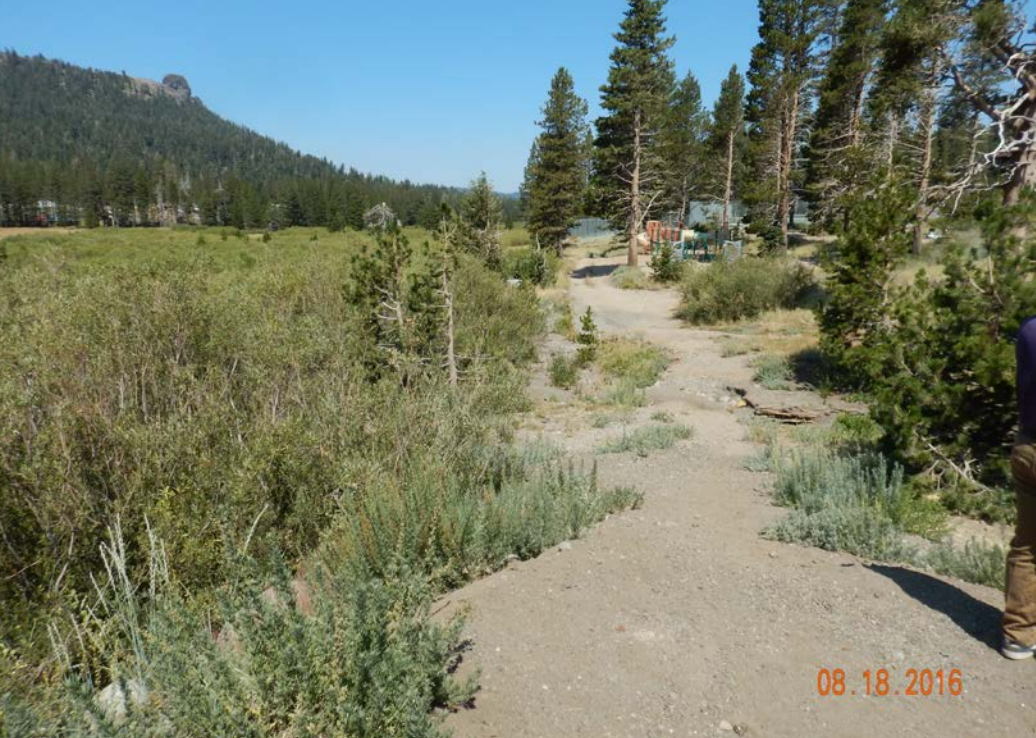 In August the meadow at Kirkwood was still covered with soil. Photo/Provided

For one, crews will need to return to the maintenance yard across from the Timber Creek beginners area identified as Site 4C.

The work seems hardly over, but the snow removal practices of the past appear to be.

Further mitigation calls for Kirkwood staff to identify adequate alternative snow storage areas and procedures. In a memo addressed to the board and obtained by LTN, Kirkwood stated it plans to remove snow “at least 35 feet from wetlands and naturally functioning riparian vegetation areas,” and measures will be made during snow removal “to prevent asphalt grindings and other sediment from entering surface waterways and groundwater.”

The Vail-hired consultant piled on further concessions made or those needing to be made. Beyond the physical work, staff training on how to handle snow removal near wetlands is expected to be implemented.

The work as planned will continue into 2017.

“Since the drainage culvert at Site 4C appears to be a relic from past drainage configurations, the culvert system is essentially plugged, and given the time constraints leading up to the impending winter season, Vail Resorts does not intend to disturb the existing drainage structure at Site 4C and will cover the drainage system to restore grade in the area. Backfill material will be sourced from the stockpiles of material removed from Sites 1 through 4. The removal process has generated stockpiles comprised of a mixture of varying degrees of asphalt and soil materials. Stockpile material largely comprised of soil, with only a small proportion of asphalt grindings will be used to backfill the culvert at Site 4C,” Kennedy/Jenks supervising engineer Rick Teczon wrote in an email to involved parties.

The legal issue serves as a black eye of sorts for a ski resort giant that prides itself on eco-friendly business practices.

Part of the water quality report indicated Kirkwood used the asphalt grindings for traction in its parking lots.

When asked for a further explanation, he did not respond to LTN.

Kirkwood would also not respond to questions about the settlement.

Cooper did explain what measures the ski resort was making to alleviate future contamination.

“Since receiving notice of this issue on May 6, 2016, we have worked closely with the Central Valley Regional Water Quality Board and other agencies to implement immediate remediation actions that we believe have contained any environment concerns,” he shared in an email. “It’s important to note that the samplings the agencies asked us to conduct did not demonstrate any impact on groundwater.”

Cooper added that Kirkwood – which ushered in new General Manager Doug Pierini last summer — and its parent company “take seriously our role in responsibly stewarding the environment and the public land in which we are entrusted.”