A South Tahoe High School graduate has been offered the job as fire chief for Lake Valley Fire Protection District.

Tim Alameda comes with a wealth of experience, knowledge of the area as well as the issues throughout the Lake Tahoe Basin.

“I’m a firefighters’ fire chief. That is my reputation. I really pay attention to the fine details of how they do their job,” Alameda told Lake Tahoe News.

While the board made the offer last week, a contract has not been signed – nor has Alameda even seen one. He’s expecting to next week.

Today Alameda is a division chief and the fire marshal for North Tahoe Fire Protection District. He is also the chief for Meeks Bay Fire. North Tahoe and Meeks Bay essentially merged a few years ago, but the latter has a separate administrative structure. The department goes from the West Shore to Kings Beach, so essentially half the basin.

The vacancy at the Meyers-based department came earlier this summer when Gareth Harris was shown the door after five years. He survived two votes of no confidence from his staff, as the board was reluctant to part ways.

Board Chairman Bob Bettencourt chose not to speak with LTN about why Alameda was the board’s top pick.

Alameda got his start as a firefighter reserve in Meyers in the 1980s. At that time is was a joint program between Lake Valley and South Lake Tahoe fire departments. 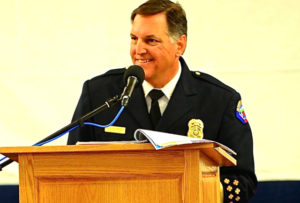 Starting in 1984 he spent 27 years with Reno Fire Department. He went from a rank and file firefighter to the chief.

In 2011, Alameda retired from Reno. North Tahoe recruited him to be a fire marshal. He took this job seriously – spending many a day walking around his jurisdiction, into businesses and talking to people. He was seeing where the hazards were, listened to concerns and helped educate people.

He rose to division chief and then took over Meeks Bay.

Those in the fire community call Alameda a true professional, forward thinker and good with personnel. Until the ink is dry, people were hesitant to go on the record about Alameda. The same goes for his current boss, Mike Schwartz.

Alameda, 57, did not want to discuss the morale issues at the department, the board, or the past.

Once on board he expects to take 90 days to listen and learn.

“I do know the firefighters are extremely respected. We have had several really bad high angle rescues in Meeks Bay and the Lake Valley guys come over. They are methodical and perfect. It’s amazing what they do,” Alameda said.

He knows board member Bettencourt from his early 20s – Alameda is now 57 – because as a U.S. Forest Service firefighter Bettencourt taught his community college wildland fire class.

Wildland fires are something Alameda is well aware of. He was president last year of the Lake Tahoe Basin Fire Chief’s Association. The wildland urban interface is a constant issue for fire agencies when it comes to protecting the community from a blaze that starts in the forest.

On Wednesday, Alameda is meeting with a forester from the National Forest Foundation, a nonprofit partner of the Forest Service, to talk about forest fuels in Tahoe.

While he didn’t lose a structure during the Angora Fire, a house he and his dad built on Boulder Mountain was destroyed.

“I felt a little bit of that pain,” he said.

Those 254 houses that burned in 2007 were part of that wildland urban interface.

He was back in the neighborhood last week with his wife, Lisa. Driving through the burn area is something he does from time to time.

As a kid, he spent many summer days fishing at Angora Lakes or hunting grouse in the area.

Today,  Alameda says what free time he has is usually spent with his wife. They have an acre in Nevada with horses and bird dogs. Together they hike a lot. Their two daughters are in the Sparks area; they also have family in South Lake Tahoe.