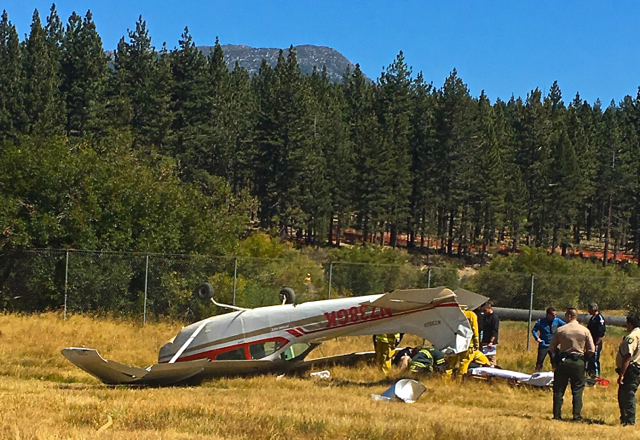 A plane rests upside down after arriving at Lake Tahoe Airport on Sept. 5. Photo/Provided

A pilot of a Cessna 180 was taken to Barton Memorial Hospital this afternoon after the plane flipped while landing at Lake Tahoe Airport.

The woman sustained neck injuries. Her male co-pilot was able to walk away. The names and hometowns of the couple have not been released. Officials said they were in a rental plane.

The incident occurred about 1:30pm Sept. 5. Friends of the couple were having lunch at the airport restaurant, but refused to talk to Lake Tahoe News.

Mountain West Aviation officials speculate there was a downdraft that caused the plane to flip. It is resting upside down on the far side of the runway near the Upper Truckee River.

The plane came in from the direction of the lake.

“The wind was behind them. They should have come in from the other way,” Kristin Utler told Lake Tahoe News.

She and her family were preparing to return home to Concord when the accident occurred.

Their plans, and those of others, were delayed at least two hours. The airport was closed immediately after the accident.

FAA officials are expected to arrive later Monday to take over the investigation.