Tahoe is one of the world’s deepest, largest, and clearest mountain lakes, holding about 39 trillion gallons of famously blue water any given day—water that takes hundreds of years to flow through the lake and out the Truckee River.

As the first Lake Tahoe Summit approached in July 1997, agencies were not satisfied with the pace of the lake’s restoration.

Realizing no one agency could succeed alone, agencies were working to create a coordinated program for the entire watershed, one with the size and scope needed to correct past environmental harms that continue to impact the health of the lake and its landscape. 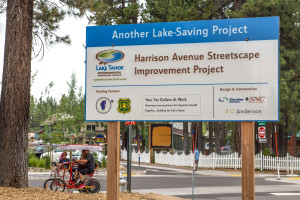 Former President Bill Clinton and Vice President Al Gore arrived at the Tahoe summit with that same goal in mind. “We have a shared responsibility to build on our commitment at all levels to be sure the lake and its environs are protected,” Clinton said.

At the summit, Clinton signed an executive order creating the Lake Tahoe Federal Interagency Partnership. The order helped unite federal, state, and local agencies and TRPA, as well as a wide range of their programs, into a new Lake Tahoe environmental improvement program.

Clinton pledged tens of millions of dollars in federal funding for the new effort, money matched by the states of California and Nevada, local governments, nonprofits, and the private sector.

So was the official launch of the EIP, a collaborative, basinwide program involving more than 50 partners working together to not only restore Lake Tahoe’s famed water clarity, but also improve its air quality, forest health, fish and wildlife habitat, and public recreation.

Several years of work went into forming the EIP before Clinton’s visit. Jim Baetge, then director of TRPA, and Carl Hasty, then a program manager at TRPA, laid the groundwork by spelling out preliminary cost shares and priorities for the local, state, and federal partnership, as well as a $900 million project list for the first 10 years.

“When you think about how we fix Lake Tahoe, it’s really a retrofit issue,” Baetge said. “We’ve got regulations to control new development, and that’s important. But we also need to have funding to correct the mistakes of the past.”

Baetge, Hasty, and others rallied support for the EIP framework and raced to prepare plans for the new program in time for Clinton’s visit.

“Everywhere I could at that summit I made a point of waving that document around,” Baetge said about early plans for the EIP. “I wanted everyone to recognize that there is a solution. To say, here it is, here is what it will do, and here is what it costs.”

The EIP has proven more successful than even Baetge or Hasty imagined. Twenty years later, federal, state, and local agencies and nonprofit and private sector partners have invested more than $1.9 billion and completed nearly 500 projects.

“This program is a model of how you can do environmental restoration throughout the country,” Baetge said.

By taking a broad, landscape-level approach to Tahoe’s restoration, often with multiple partners working together on multiple benefit projects across their normal jurisdictional boundaries, more has been accomplished than via a traditional silo approach.

Thousands of feet of stream channels have been restored around the basin, such as projects in the Ward Creek, Blackwood Creek, Third Creek, Incline Creek, and Upper Truckee River watersheds. These projects have fixed past damage from logging, cattle grazing, and urban development to improve fish and wildlife habitat and reduce erosion and the amount of clarity-robbing fine sediment washing into Tahoe.

Thousands of acres of marshes and wetlands have also been restored through the EIP. Tahoe’s natural water filters, these areas are critical in restoring and protecting the lake’s water quality and clarity. They also improve fish and wildlife habitat and, through projects like the Lower West Side Project, which includes the well-used Cove East area near the Tahoe Keys on the South Shore, provide popular recreation areas.

In the Lower West Side Project, the California Tahoe Conservancy restored part of the Upper Truckee Marsh that was filled in decades ago for planned but never built condominiums and a hotel. The agency is now working to expand on the project, looking for funding to restore another 500 acres of the Upper Truckee Marsh, once one of the largest marshes in the entire Sierra Nevada, and tie it in with other restoration work upstream.

Working as the Tahoe Fire and Fuels Team, local fire districts and land management agencies like the U.S. Forest Service, Nevada Division of Forestry, and California State Parks have cleared hazardous fuels from tens of thousands of acres of forest, improving forest health and habitat and reducing wildfire risk for Tahoe communities. The Tahoe Fire and Fuels Team has reduced hazardous fuels on more than half of the wildland urban interface around Tahoe neighborhoods, and is working to complete the rest over the next five to 10 years and expand projects into more remote forests around the basin.

Caltrans, Nevada Department of Transportation, and county transportation departments have upgraded hundreds of miles of roadways in the Tahoe Basin to reduce soil erosion and capture and treat polluted stormwater runoff before it washes into the lake.

The Heavenly Gondola is a significant example of the EIP’s public-private partnership model. The gondola, opened in 2000, provided a way to reach Heavenly Mountain Resort from the redeveloped shops and lodging in Heavenly Village. By eliminating the need to drive from the bed base to other mountain access points, the project helped reduce crosstown traffic by about 20 percent. Redevelopment has continued in the area, reducing impervious coverage and installing better stormwater systems. And the Heavenly Epic Discovery Project approved in 2015 is now expanding the mountain’s summer attractions, offering people new ways to access national forest lands and experience Lake Tahoe.

Another example of the EIP’s public-private partnership approach can be found in the aquatic invasive species program. A boat inspection program launched in 2008 through the EIP has successfully protected the lake from new aquatic invasive species. And researchers and agencies have pioneered new ways to fight invasive species already in the lake. Over several years in iconic Emerald Bay, barrier mats and divers were used to eradicate acres of invasive plants that were taking over the sandy shores and clear water and keeping people from swimming, boating, and enjoying the lake there.

After 20 years of projects completed by the partners working through the EIP, the long-running decline in Lake Tahoe’s water clarity has halted and started to reverse. Tributaries, marshes, and forests are healthier. Rare plants like Tahoe yellow cress are protected. Tahoe’s only native trout species, the Lahontan cutthroat trout, has been reintroduced in Fallen Leaf Lake and the headwaters of the Upper Truckee River. Communities and the transportation system are improving.

“We have a great goal to rally around, taking care of this special place,” Jeff Marsolais, forest supervisor for the Lake Tahoe Basin Management Unit, said about the EIP. “It’s the old adage about the sum being greater than its parts. The EIP is the framework to bring intention and purpose to the work we are doing, and allow all of us to accomplish more together than we ever could alone.”

“The EIP provides a common vision for all the public and private partners in the basin,” said Patrick Wright, executive director of the California Tahoe Conservancy. “For each major program—from stormwater to forest health to aquatic invasive species—the partners have developed a joint guiding document, a priority list of projects, and a set of performance measures to track progress.” 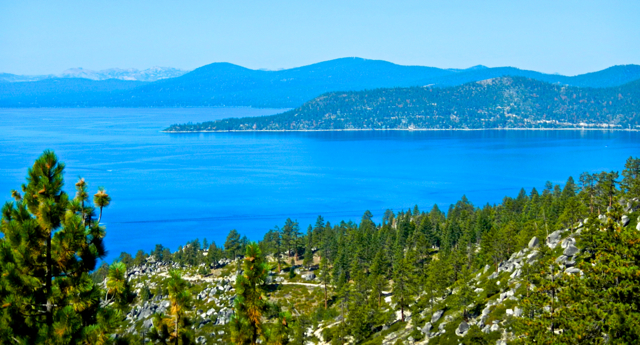 Lake Tahoe’s environmental problems and solutions have never been limited to any one political jurisdiction. And the EIP reflects the reality that Tahoe’s environment can never be restored without multiple agencies working together, coordinating, prioritizing, and investing in the right projects.

“Lake Tahoe is collaborating on a monumental scale,” said Kim Caringer, TRPA’s environmental improvement division manager. “This level of coordination is driving results on the ground.”

Lake Tahoe and its environment are responding positively to the basin-wide restoration approach launched through the EIP. With sound science guiding project investments, the EIP now ranks among the most comprehensive environmental restoration programs in the nation. The biggest challenge now, after 20 years, is to keep progress going. That means finding funding for additional projects and adapting to new challenges such as climate change and drought and the impacts they pose for the jewel of the Sierra—as well as the local economies that depend on its health.

“If we value Lake Tahoe as a national and international icon, we have to continue and protect the investment we have made,” Caringer said.

Tom Lotshaw is the public information officer for the Tahoe Regional Planning Agency. This article first appeared in Tahoe In Depth.