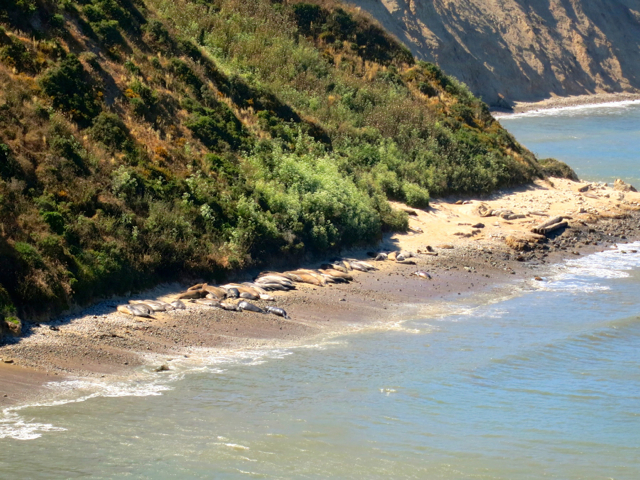 Northern elephant seals sun themselves on the beach near Chimney Rock. Photo/Jessie Marchesseau

POINT REYES NATIONAL SEASHORE – As a native Montanan, I grew up nowhere near a seashore. I was a teenager before ever even laying eyes on the ocean. Though I have since visited it numerous times, I don’t think it will ever cease to be a wonder to me: how so much beauty, life, power and even destruction can be combined into this one body, living, yet not living.

This summer, in observance of the 100th anniversary of our National Parks System, my husband and I decided to seize the opportunity of a recent three-day weekend to explore one of our nearby, and perhaps lesser-known, national treasures. 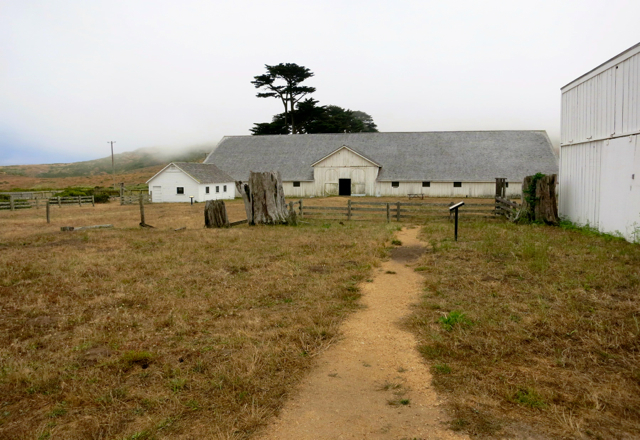 The dairy building on the Historic Pierce Point Ranch was once the center of a thriving dairy business. It remains preserved within the Tule Elk Reserve at Point Reyes National Seashore. Photo/Jessie Marchesseau

These seaside preserves comprise a relatively small portion of the more than 400 sites which make up the National Parks System. And at just 70,000 acres, Point Reyes may seem almost tiny next to a 750,000 acre park like Yosemite. But the 80 miles of undeveloped coastline encompassed by Point Reyes National Seashore offers visitors an experience every bit as intriguing, delightful and awe-inspiring as one would expect from a national park.

Whitewater waves more than 6-feet high crashed onto the shores at Point Reyes Beach while we enjoyed a picnic lunch on the sand, onshore winds ruffling our hair. A washed up log was a makeshift picnic table as our niece and nephew crawled in and out of a driftwood “fort,” our three dogs digging holes in the sand and hunting for crab carcasses at our feet.

As dog owners, we always enjoy our adventures a little bit more with furry family members at our sides, and Point Reyes proved to be pleasantly dog-friendly, at least as far as national parks are concerned. It offers three dog-friendly beaches accessible by car or foot, even more if you choose to boat in. Printable maps clearly depicting dog-friendly locations are available online, and the park ranger I chatted with at the Bear Mountain Visitor Center was more than happy to highlight the locations on my free park map where I could explore with my four-legged friends. They do ask you to keep dogs on leashes, clean up after them and stick to the designated areas. But with miles of seashore designated dog-friendly, we had plenty of room. 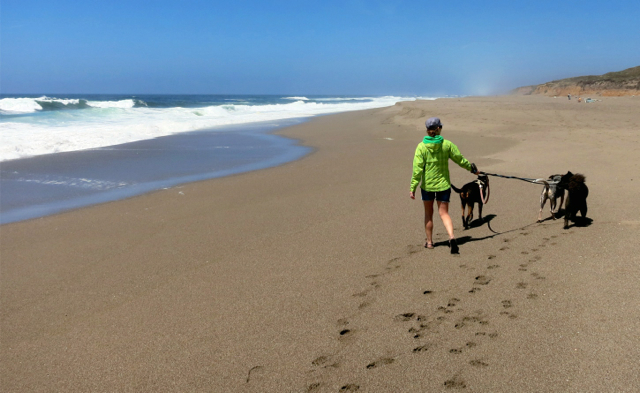 Point Reyes Beach is just one of the beaches in Point Reyes National Seashore which allows dogs. Photo/Jessie Marchesseau

Most of the beaches at Point Reyes are not swimming beaches. Dangerous, often pounding surf and rip currents deem much of the water unsafe for venturing in. Moderate temperatures and steady winds typical of Northern California beaches don’t exactly beckon for bikinis and board shorts anyhow. But the sand is soft, and the views outstanding.

Piling back in the car, our next stop was Elephant Seal Outlook. The northern elephant seal is perhaps the most iconic of the 80 species of mammals known to reside within the boundaries of the national seashore, which also includes the water and land a quarter mile off shore. From the outlook, we peered down on two dozen elephant seals sunning themselves on the beach below and even a few pups frolicking in the water. The cooler temperatures and gusty winds were clearly not affecting their afternoon.

The following day we ventured to the north end of the park in search of the only animal which may rival the seal in its iconic status within Point Reyes: the tule elk. Once nearly extinct, tule elk at Point Reyes now number more than 400. At the far northern end of Point Reyes National Seashore, spanning a small peninsula called Tomales Point, is the Tule Elk Reserve.

Growing up in the Rocky Mountains, I know elk can be somewhat elusive animals, but upon reaching the reserve, we spotted three bull elk and one cow almost immediately. Continuing on to the designated parking area, we set out on a short hike in search of more. This proved not only a welcome opportunity to stretch our legs, but a chance to stroll through fields of wildflowers, pink, purple, yellow and white, and admire the picturesque coastline below, passing birds, butterflies and caterpillars along the way.

We were soon rewarded with the view of a small herd of elk, stopping to quietly observe as the majestic animals grazed contentedly on a grassy hillside. Returning, we had thought our luck pretty good on the day’s elk-viewing excursion. But driving out of the reserve we came upon yet another herd, this time all cows and calves, dozens of them so near to the road I felt I could walk out among them without an elk so much as noticing. I did not, however, and only invaded their privacy with my camera lens.

Our weekend coastal adventure was rounded out with a stop at pet-friendly Kehoe Beach and visits to a few historical locations within the park including the Historic Lifeboat Station, Point Reyes Lighthouse and the Historic Pierce Point Ranch, all glimpses into the colorful past life of Point Reyes.

In the end, I was glad we chose this as our national park trip of the summer. To have a place like Point Reyes National Seashore celebrating and preserving this awe-inspiring aspect of our earth right out our back doors is an amenity well worth taking advantage of. The size and location perfect for a quick weekend trip, the overall experience both relaxing and invigorating. Perhaps my favorite part though, was being able to enjoy it with family, both two-legged, and four.