INCLINE VILLAGE – Take a drive around Lake Tahoe and you’ll notice red and brown trees jutting out of the evergreen forests, their brittle pine needles dropping off dead branches. Since the snow melted, hundreds of dying trees have been exposed. They are everywhere, from Spooner Summit to Crystal Bay. Dead trees stand forlornly on the roadside, in brick-colored clusters in the meadows, and in huge swaths on the mountain slopes. 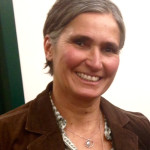 Forest ecologist and conservation biologist Patricia Maloney explained the scourge of recent tree deaths in the Lake Tahoe Basin at a May 10 presentation at Sierra Nevada College.

According to Maloney, the prolonged California drought has weakened the trees’ natural defenses to pests and disease. When there is a lack of water, Lake Tahoe’s trees are susceptible to attacks from bark beetles, forest pathogens — native and invasive — and stress caused by human activity.

“I’ve been studying why trees die for over 20 years,” Maloney said. “I know what’s going on and it’s an important issue.”

Maloney studies tree mortality in the Lake Tahoe Basin by examining the forests and extracting core samples from dead and healthy trees.

“Part of my work is to take a physiological study on drought-stressed trees in the Lake Tahoe Basin,” Maloney said. “I take a core sample and can go back over a 100 years to see how these trees are affected by drought.”

The results are not pretty. Although Maloney is still conducting her research, she’s noticed that the drought has led to increased bark beetle populations.

“In droughts you get elevated bark beetle activity,” Maloney said. “When there’s competition for resources – especially water – everything is aggravated.”

Usually, trees defend themselves from a bark beetle onslaught by secreting a sticky sap called a pitch tube, which stops beetles from burrowing under the bark. However, in times of drought, many trees simply can’t retain enough fluid to halt a beetle attack.

“Unfortunately, we are seeing no evidence of pitch tubes. The trees’ tanks are empty,” Maloney said. “We’re seeing everything from massive trees to little seedlings die. The trees are so stressed out by the drought that it doesn’t take many beetles to kill them.” 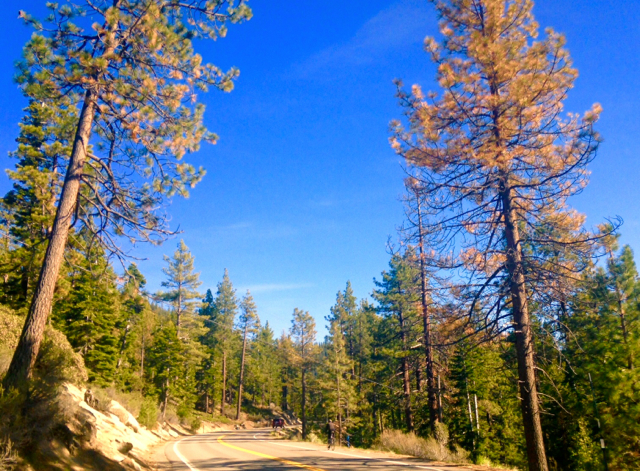 Tree mortality is a growing concern throughout the Lake Tahoe Basin. Photo/Terra Breeden

“White pine blister rust was introduced to the U.S. by white pine seedlings in the early 1900s, and probably entered the basin area in the 1940s,” Maloney said.

According to Maloney, 65 percent of the white bark pine trees on Rifle Peak are infected with blister rust.

This winter, frequent snow removal has put salt in the wound of drought-stricken trees along roadsides surrounding the lake. Quite literally, the brine that’s been slung across the road with every snowstorm is killing trees. Maloney calls this “salt stress.”

“Essentially, the salt binds with water and is absorbed by the tree, scorching the leaves,” Maloney said. “Salt stress affects trees up to 60 feet along roadsides. But in this case, public safety trumps tree health.”

Lake Tahoe isn’t the only area affected by a high rate of tree deaths this year. The U.S. Forest Service conducted a statewide survey of forest health in California and concluded that since 2015 more than 10 million trees have died. Most of the tree deaths are in the Southern Sierra where last year, temperatures and mountain pine beetle populations skyrocketed.

But Maloney insists that it’s not all doom and gloom; forests recover from droughts. It can take several years, but healthy young saplings will grow and replace the dead stands of trees. Maloney and her team of biologists speed up the forest recovery process by replanting trees in the areas most affected.

“I have 500 seedlings that we are planting from Tunnel Creek to Sand Harbor,” Maloney said.

Maloney also questions whether tree thinning, a practice that’s been utilized around the lake to reduce the risk of wildfire, is actually good for forest health. She thinks that maybe leaving forests dense and un-thinned will give more trees a fighting chance in drought years, even though it increases the threat of wildfire.

As Maloney continues to study tree mortality In Lake Tahoe, she has more questions.

“I’m a conservative optimist,” Maloney said. “Tree mortality is alarming and I’m concerned. But there’s also a lot we don’t understand. What I’m trying to do is find out why some trees die and some don’t.”

·       El Dorado County and Georgetown Divide resources conservation districts, CalFire and Society of American Foresters are co-sponsoring a workshop on tree mortality on June 17 form 8:30am-3pm at the El Dorado Board of Supervisors’ chambers in Placerville.