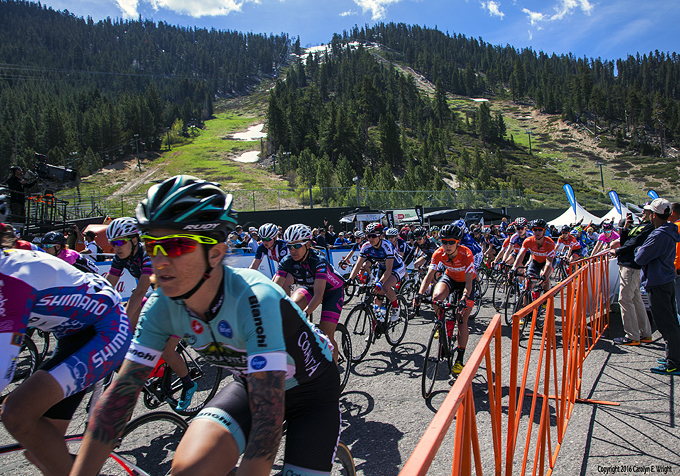 In two whirlwind finishes Thursday, the Amgen Tour of California women’s and men’s bike races came down to a sprint at the end. San Francisco rider Megan Guarnier made her move over Sarah Storey and Latvian Toms Skujins barely beat Adam De Vos.

Lake Tahoe served up one of its usual weather-challenging days for the cyclists in this Tour de France-style ride. In 2011, the men’s race got snowed out. This year, it was the wind taking center stage – with gusts up to 55 mph. 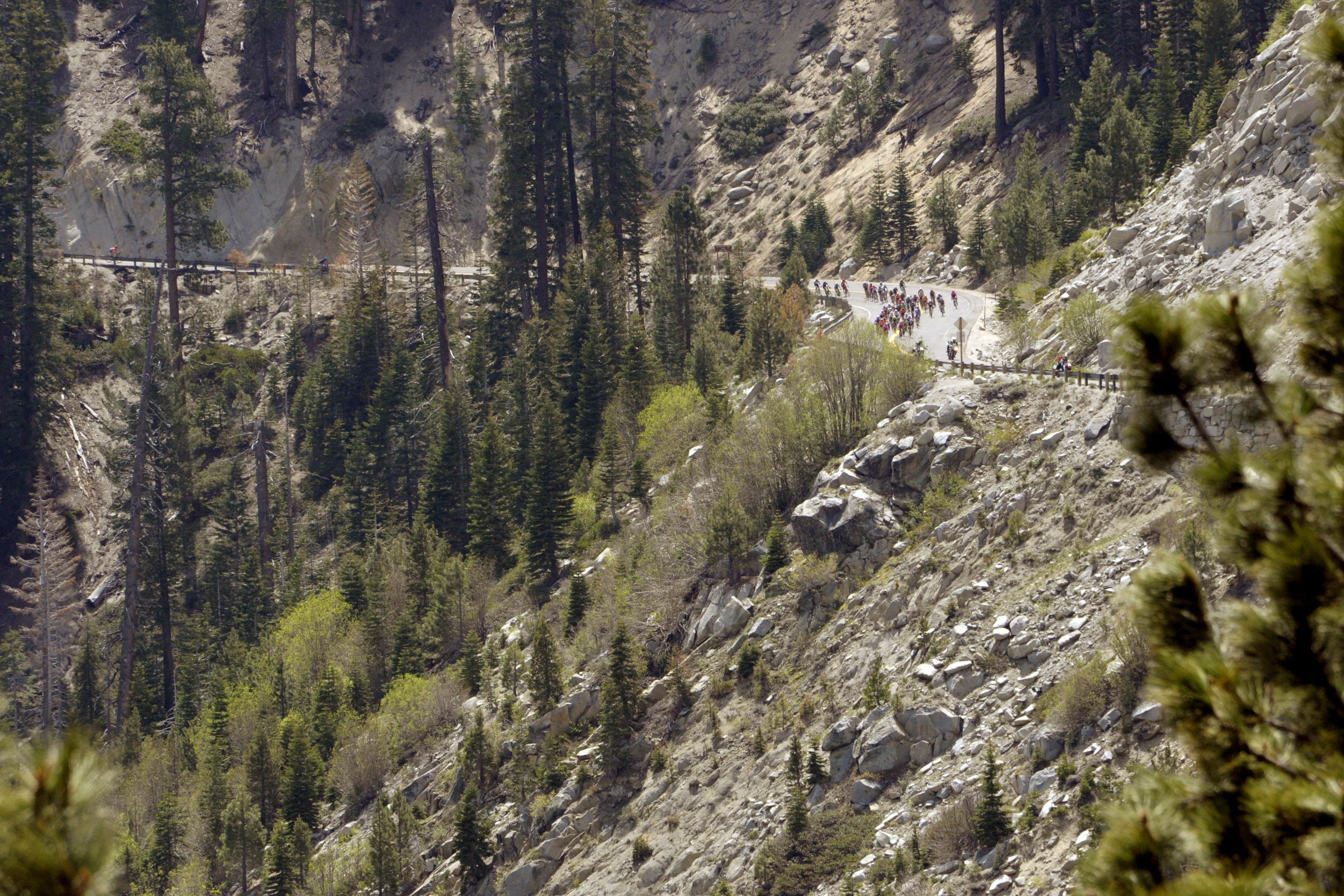 The riders seemed to take it in stride and at times embraced it. Some mentioned relishing being able to use a tailwind. 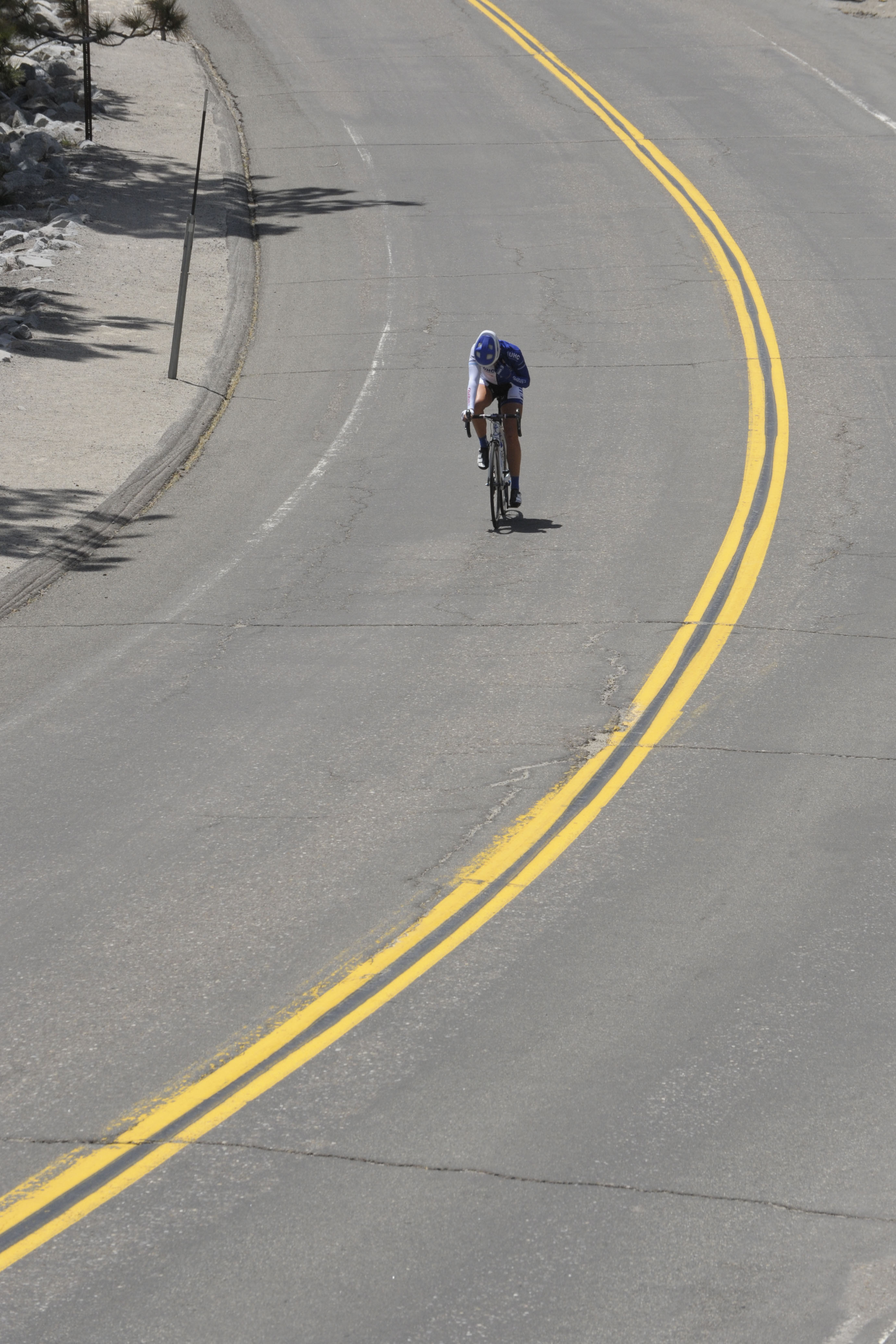 A lone woman at the end of the pack rounds a curve near Eagle Falls. Photo Copyright 2016 Lisa J. Tolda

The enthusiastic announcer called the wind “brutal” and the women’s finish “a throw down in Lake Tahoe.”

“You won’t win it in 1K, but you could lose it if you go too big,” he yelled over the speakers as the women seesawed into position.

Guarnier gasped as she pulled over the finish. 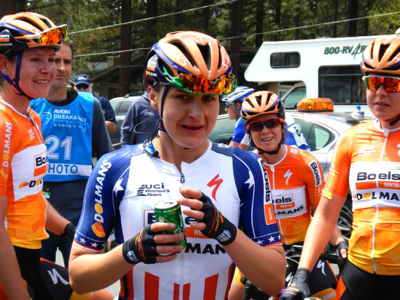 Megan Guarnier is surrounded by her teammates after winning Stage 1. Photo/Kathryn Reed

In the middle of the women’s race, Storey had a four-minute lead, then Guarnier decided to move in the last few kilometers. She came in at 3:04.57.

“It was a good finish. I got awesome support from my team,” Guarnier told Lake Tahoe News, as she rolled to a stop in the parking lot. 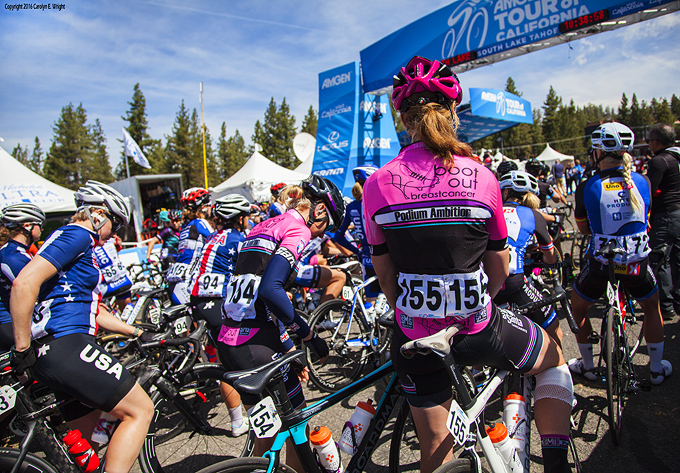 A field of more than 100 riders line up for the May 19 start at Heavenly. Photo Copyright 2016 Carolyn E. Wright

She admitted the wind “did neutralize” the ride, but she also welcomed tailwind at times. However, it was not her biggest concern at the start.

“It’s my first time riding in Tahoe. It’s beautiful. I was just afraid of the altitude,” Guarnier said. The women rolled up and down Emerald Bay and Spooner Summit, while the men came over Carson and Luther passes. 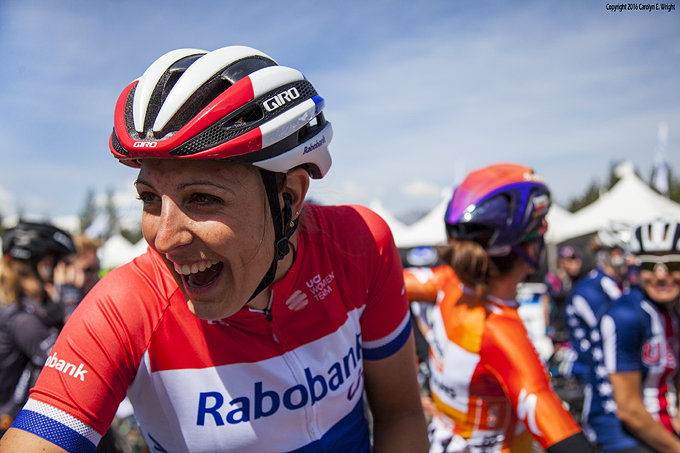 Lucinda Brand of the Netherlands is used to wind in her home country. Photo Copyright 2016 Carolyn E. Wright

“It’s not hard climbing here. The hills are rolling,” Rabo LIV Women Cycling Team rider Lucinda Brand told Lake Tahoe News at the start line. She said the altitude would be a bigger factor for her because her hometown is flat. One thing that Rotterdam and Tahoe shared May 19 was wind. She said she was riding two days ago here in the wind, where it was everywhere instead of being a distinct head or tail wind. 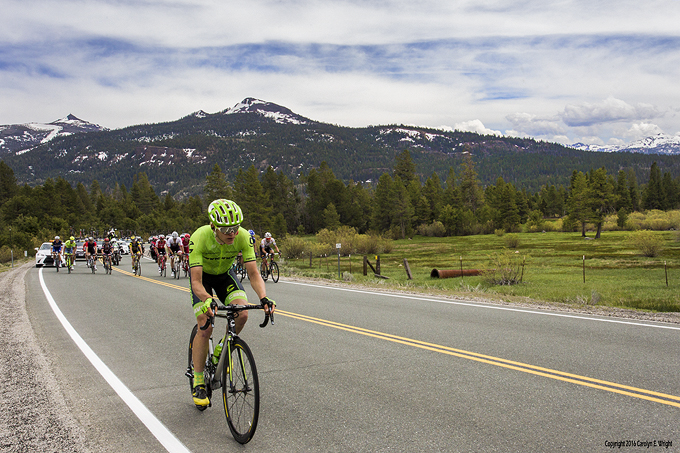 In the men’s ride, Skujins took full advantage of the wind during this stage in the last five kilometers. He just wished he would have enjoyed the Tahoe scenery more. “I didn’t have enough time,” he said at the finish.

Skujins said “it wasn’t easy,” but his strategy in the last stretch worked.

“I didn’t want to start sprinting too early,” Skujins said at a press conference. He added that logically he couldn’t make his move in the pack because he’d endure “attack on attack” from challengers. He completed the stage in 5:54.45.

During the men’s race, the announcer said the leaders were stretched out from the pack in what might as well be “a different ZIP code.”

“As I was walking up the hill I found out he was in third place,” the British Columbia resident told Lake Tahoe News. De Vos came in second in Stage 5. 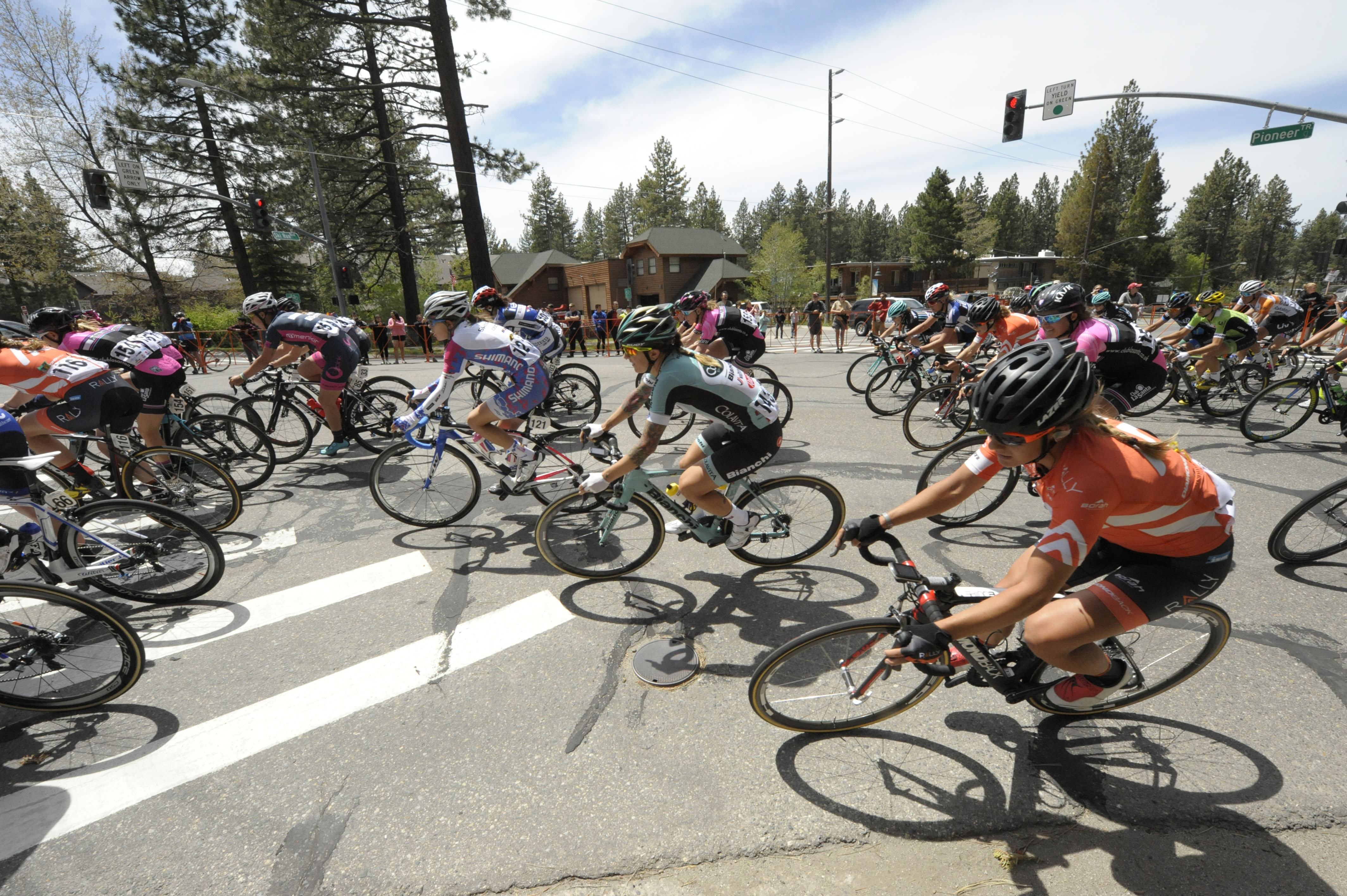 It is a tight race for women racers as they turn from Pioneer Trail onto Ski Run Boulevard. Photo Copyright Lisa J. Tolda

Several riders noted how they enjoyed the enthusiasm from hundreds gathered at Heavenly’s California Lodge for the start and two finishes. In some instances, spectators numbered about five deep from the barriers to catch a glimpse of 300 top professional cyclists giving it their all.

South Shore enthusiasts rewarded the athletes with support along the route from Meyers to the ski resort. Cowbells were clanging hard and spectators were beating on the barricades at Heavenly. The noise was accompanied by the commentator who got the crowd geared up with his play-by-play assessment with an education in how altitude makes it more difficult for recovery.

Missy Hansen of Chicago and Karen Pollack of Delaware camped out on the Heavenly Tram loading area steps to see the two finishes.

“You don’t have to be a cyclist to get into it,” said Hansen, who thoroughly enjoyed her Amgen event. 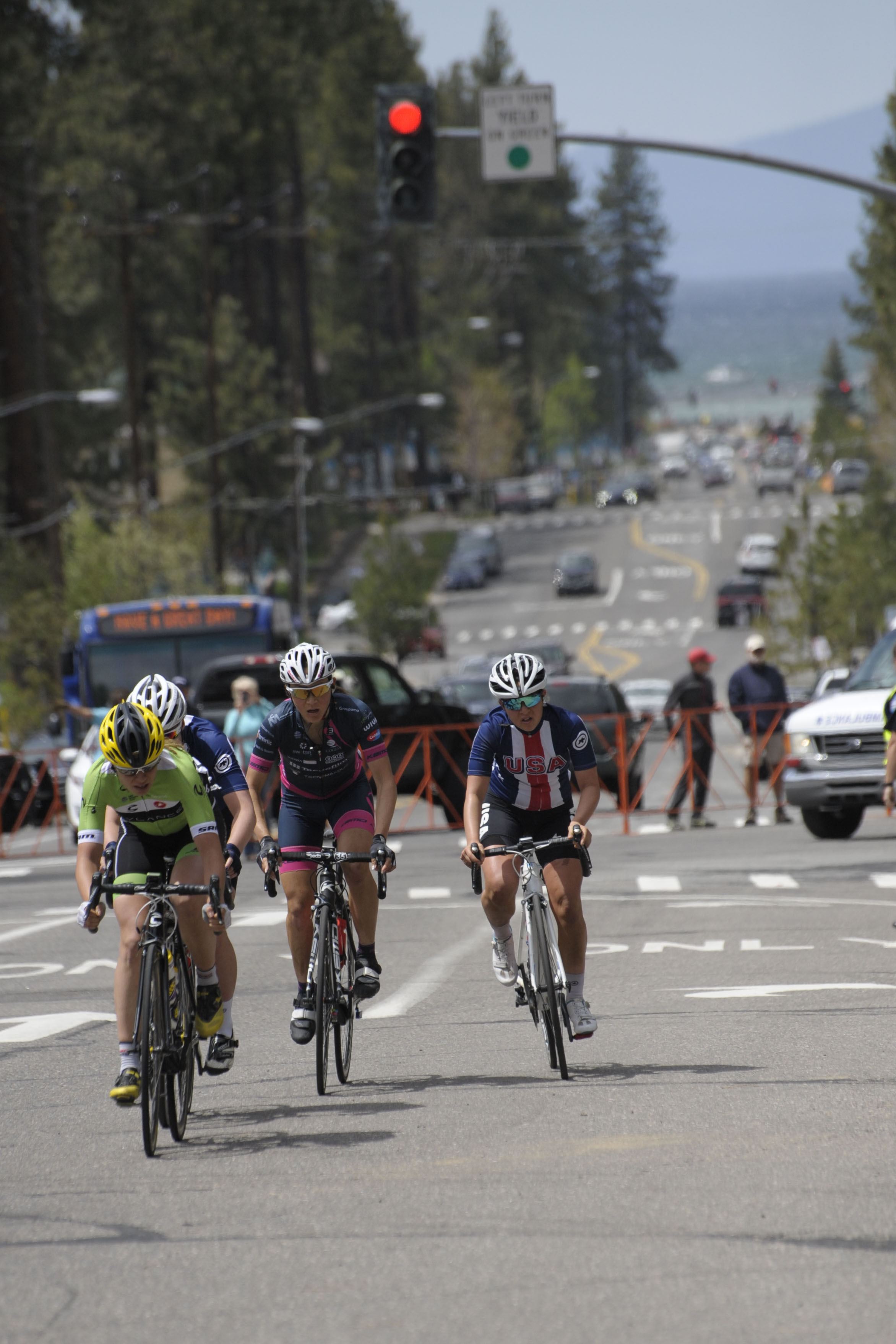 Her friend, Pollack, is a regular as a spectator on the professional cycling circuit, having witnessed two Tour de France rides. It was her second Amgen, and she talked Hansen into coming to Tahoe just for this event.

“Our whole trip was to follow this race,” said Pollack, who rides on occasion.

Hansen said she’s learned a lot from Pollack, who even knows what a neutral start is. It’s essentially a warm up until the race director drops the flag, then “it’s game on,” she explained.

Pollack disagrees with some who call cycling boring to watch.

“It’s a fascinating sport,” she said, adding that it was a good idea to have the men and women finish in the same spot. 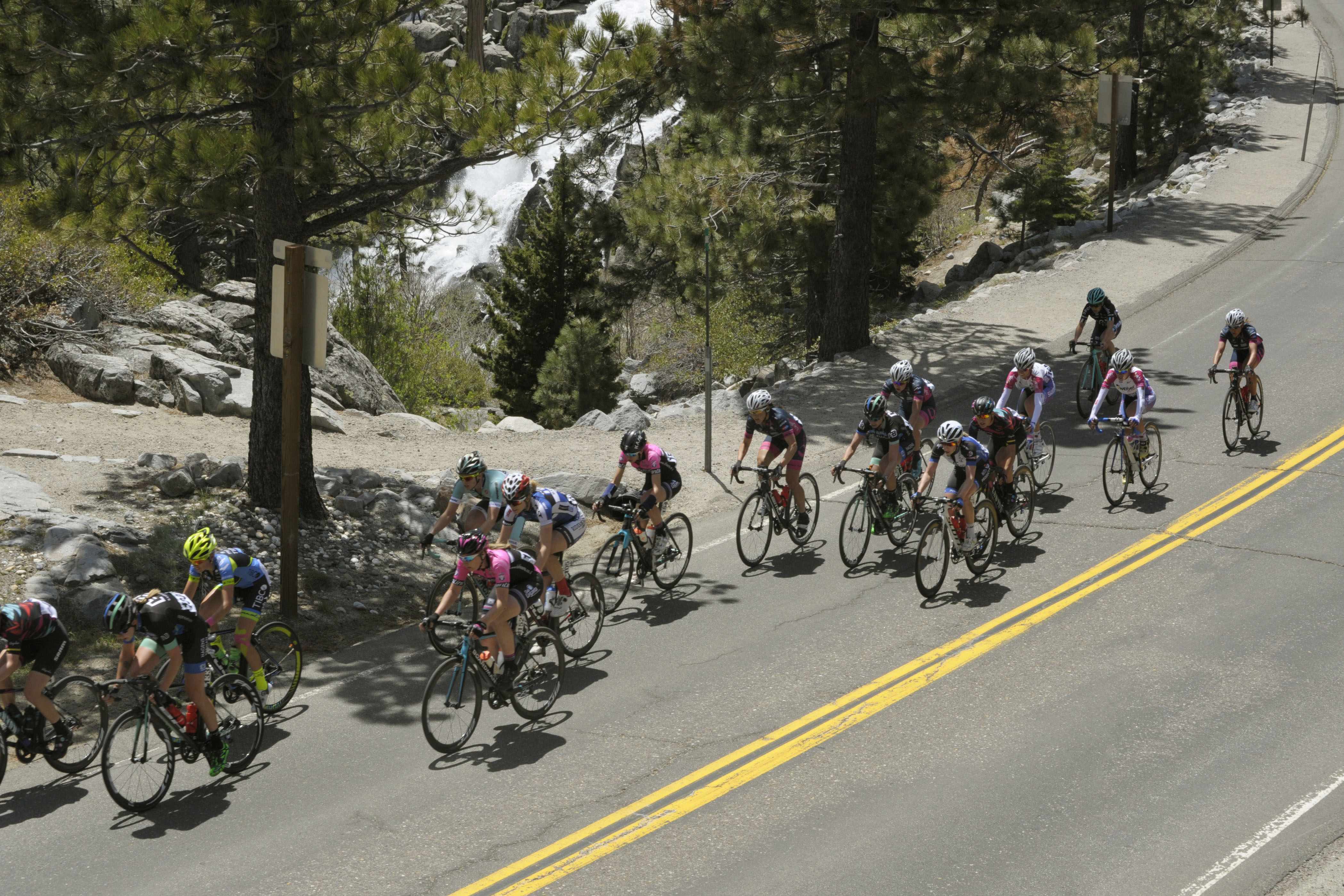 The women fly past Eagle Falls on May 19. Photo Copyright Lisa J. Tolda

The women did 72 miles around the lake to launch the UCI World Tour. The men completed the 130-mile route from Lodi, which made history for the Tour of California race with having its highest peak elevation of 8,600 feet.

“It’s so exciting. It’s pretty incredible, this route, because it’s so steep. And the wind was out of control,” Hilary Bailey said, standing near the finish line. She and husband Don make the race their vacation every year from their home in McMinnville, Ore.

Friday’s Tour of California race takes the men through Folsom before they hit the rolling, vineyard-lined hills of Sonoma County for Santa Rosa’s Stage 7. The women will have a time trial in Folsom for Stage 2.

Kathryn Reed contributed to this story.