The road to Denali leads to a world of outdoor wonder. Photo/Jacob W. Frank/NPS

DENALI NATIONAL PARK & PRESERVE – After almost four hours on the bus, the driver pulled to the side of the road and opened the door.

We heaved our backpacks over our shoulders and stepped off. The bus receded in the distance. We stood in a massive valley, surrounded by broad-shouldered peaks, rolling tundra and absolute silence.

All my problems rolled away with the bus. Across the valley floor, I saw two boulders tumbling down a green slope. I pulled out my binoculars: They weren’t boulders; they were baby grizzly bears, playing. In one swift motion mama bear stood, growing twice in size, nose in air.

My hiking companion and I headed up a creek bed and were soon in a small canyon, out of any range I hoped the adult grizzly would find threatening. The hike itself was typical of my experience in Alaska: periods of tundra and rocky streambeds punctuated by river crossings and something I rarely encountered in Tahoe, fear. Of animals, wet feet, the elements. Even in mid-summer, the weather was ever-changing—it looked as if the turbulent sky might rupture any minute. And around seemingly every corner were enormous piles of what looked like regurgitated berry pie: grizzly scat. So we’d sing louder to keep them away, maybe every song I remember from the ’70s. By the time we reached camp I had just exhausted my Tony Orlando and Dawn repertoire.

I rarely thought about dying when backpacking in Yosemite or Desolation Wilderness. But I did in Alaska.

It’s the scope of Denali National Park & Preserve that gets you. At 6 million acres, it’s the third largest national park in the U.S. (the top two are also in Alaska). It contains the highest portion of the magnificent Alaska Range, glaciers and massive rivers spilling into grand valleys. Conservationist Charles Sheldon and dog musher Harry Karstens first wintered in Denali in 1907. Deeply moved by their experience, they lobbied Congress to establish Denali as a national park to conserve wildlife. In 1917, Mount McKinley National Park was created; the park name was changed in 1980 to include the native Athabaskan word “Denali,” meaning “the high one.” I wanted my whole life to see this massive peak, but clouds had obscured previous attempts. At 20,310 feet, Denali creates its own weather, and doesn’t show itself easily. 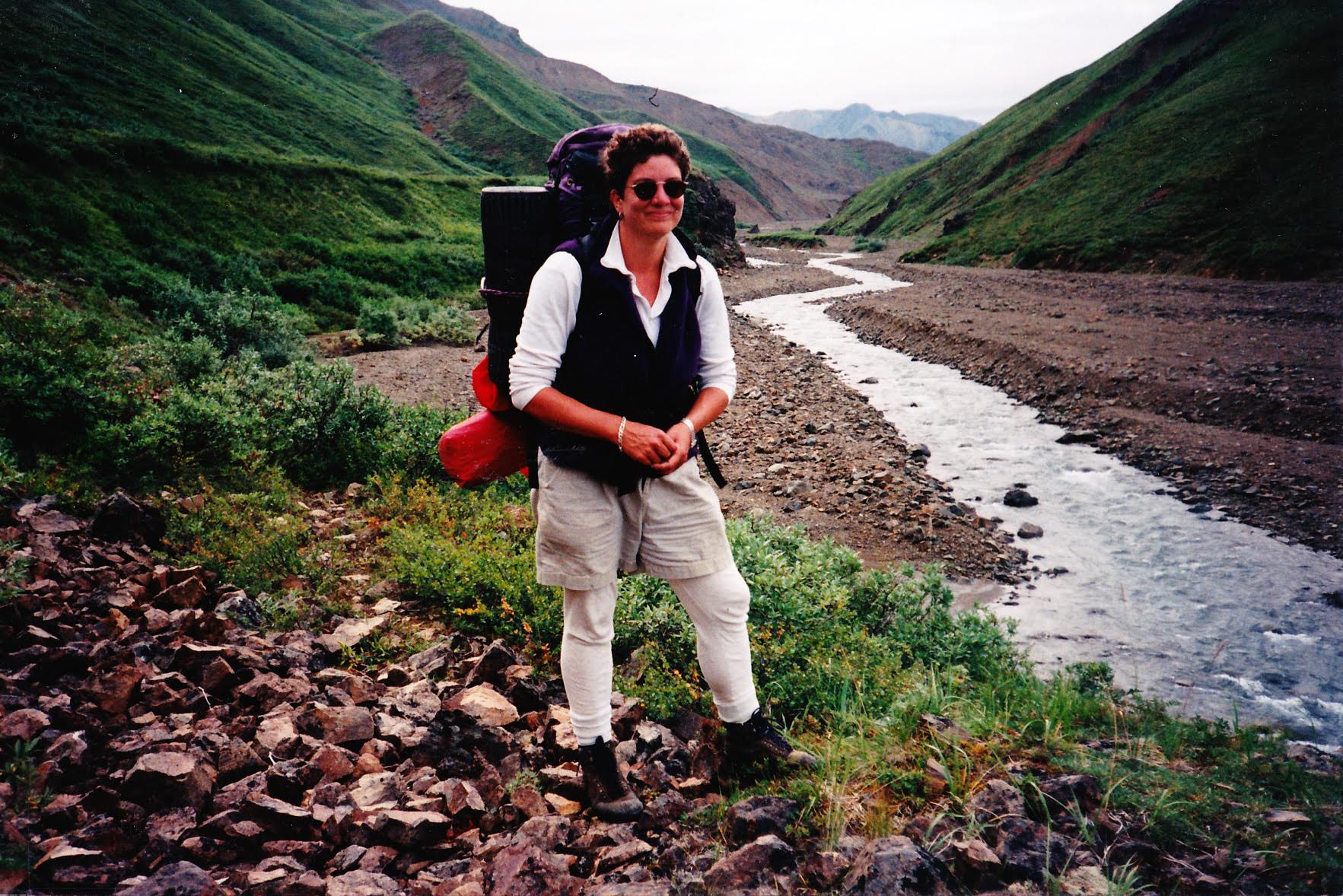 Except for a lottery held twice a year, cars are not allowed on the road inside the park. If you plan to backpack, before being issued a permit you must watch a video on Denali’s humbling weather, the Golden Triangle—your tent, cooking area and bear canister must be at least 100 yards from each other—how to cross a wide, braided river and, finally, advice on bear, wolf and moose encounters. (For example, never run from a grizzly or a wolf. But if charged by a moose in open terrain, run in a zigzag pattern. It’s a lot to remember, how to run/not run.)

Then you can apply for your permit. Denali National Park & Preserve is made up of 87 units, and you have to choose your unit before you apply. There are quotas and limits to the number of people allowed in each one to avoid the kind of scene you have at popular trails in other parks. And then you take a converted school bus to the trailhead. When you’re done hiking, you come out and wait for the bus.

Only four people were allowed in our unit. We never saw the other two.

You must apply for your permit in person. Because Denali is not exactly on the beaten path–it’s about a five-hour drive from Anchorage, where I lived—you should be ready to roll. We’d been warned to have three or four options, as the most popular hikes might already be at their limit. All of our choices were booked, so we took a ranger’s recommendation of Stony Creek, one of her favorites, a hike with varied scenery, and if we were lucky, a superlative view of Denali on a rare clear day. (Weather is something else you need to worry about in Denali. Cloud cover necessitates knowing how to use a map and compass.)

I’d lived and worked in Yosemite for a decade before I moved to Alaska and I felt confident about my trail skills. The problem—or the beauty—in Denali is once you get off the bus, there are no trails. There are no signs. The rivers are wider than highways and there are grizzly bears and wolves and moose that you should run/not run from. And walking on taiga and tundra, rather than granite, is not as easy as it sounds. Alpine tundra is low and scrubby, but brushy tundra is soft: two steps forward, one step back.

After dinner, the clouds hunkered down and we lost any view we might have had, so we retreated to the tent. A few hours later, I woke to the sound of footsteps in front of the tent. My heart seized: Would I stupidly die in grizzly country? But the steps were light, and multiplied until they sounded like castanets. Rain on rocks, perhaps. I peered out the tent’s avalanche chute to see caribou, one after another, walking single file past the tent in twilight. It turned out that we were sleeping on a caribou migration route. I opened the tent door and watched them pass until falling back to sleep.

In the morning, the tent glowed bright yellow. The sun was out! I jumped from my bag and hopped outside and there was Denali in all its glory. My jaw dropped.

An ecstatic current ran through me. While the world around me awoke, the massif held my gaze—a form of communication beyond the corporeal plane. The intimacies of the park were more captivating than its scope: Up close with grizzlies and caribou. Birds and berries. Just me and a grand slam view of Denali in full sun. Places like this change you; they settle your soul.

Why is it important to preserve these wild spaces? Although conservation of species and habitat is crucial, humans need these wild spaces, too. We need the places where we can escape from the pressures of modern life and reconnect to our best selves. Writer Wallace Stegner had it right when he said, “National parks are the best idea we ever had. Absolutely American, absolutely democratic, they reflect us at our best rather than our worst.”

A few years ago, a close friend with cancer asked me to take her to Yosemite National Park before she died. Walking near the Ahwahnee Meadow, she said incredulously, “This belongs to all of us.” I’d never thought of it that way, but, yes, it does. And the more time we spend in our parks, the more likely we are to care for them. Saving our wild landscapes is saving ourselves.

Kim Wyatt is the publisher of the independent press Bona Fide Books, which published “Permanent Vacation: Twenty Writers on Work and Life in Our National Parks”. She worked in Yosemite National Park for 13 years.

Note: Information on backpacking in Denali National Park & Preserve may be found here.