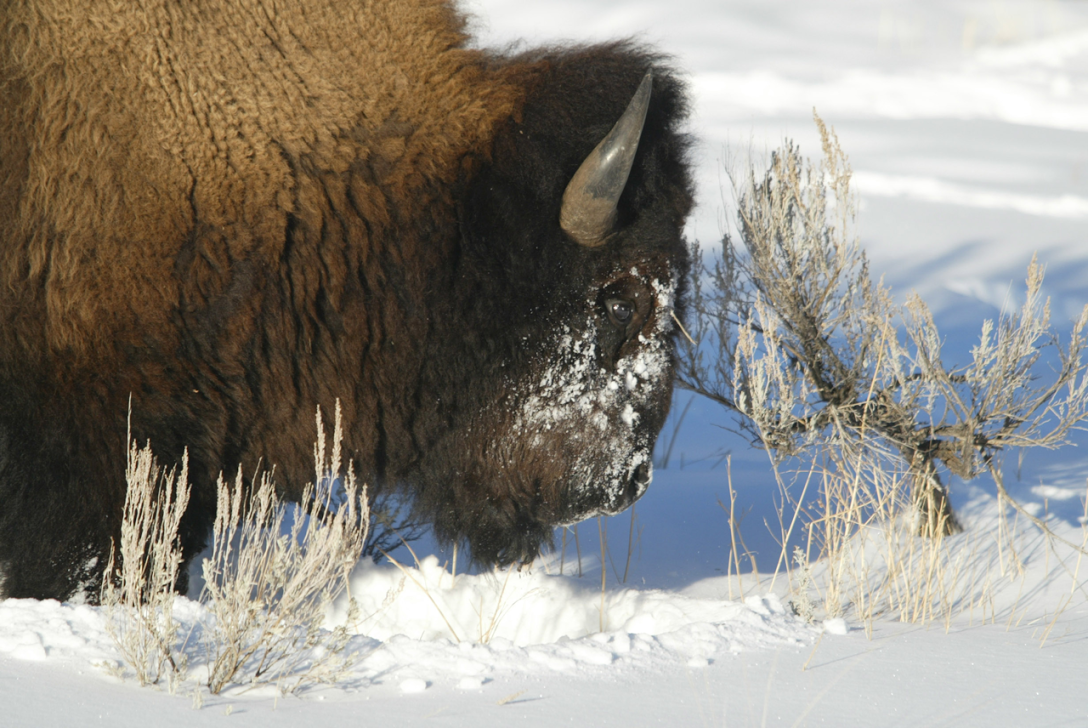 Sometimes it’s better to find Plan B when a bison is on the trail. Photo/National Park Service

It was a face-to-face encounter almost 20 years ago with three bison standing at the other side of the bridge on my cross country ski journey to Fairy Falls in the 2.5 million-acre Yellowstone National Park.

Reflecting back, it was a memorable time. For years, Yellowstone has been ground zero for controversial land-use issues.  These include the reintroduction of wolves and its effect on nearby ranchers; the balance between recreation and environment regarding pollution from snowmobiles; the management of fire prompted by one of the nation’s worst blazes in 1988; the study of geothermal activity in the land of more than 9,000 geysers; and the protection of a large free-ranging herd of bison from slaughter.

Considering Yellowstone represents a “survival of the fittest” hotbed, I was not about to challenge a 1,400-pound animal that can run 35 mph. 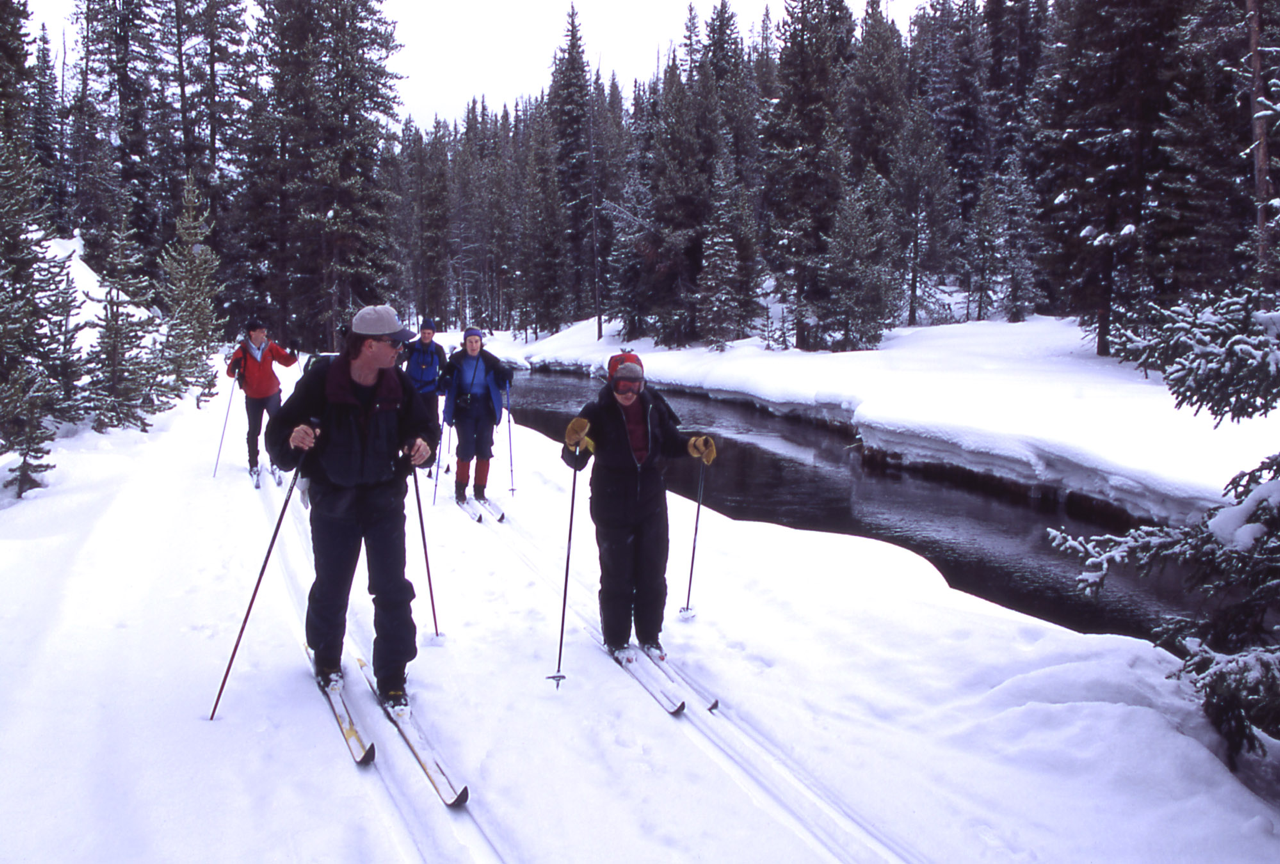 Cross country skiing in most national parks is a special experience, especially so in Yellowstone. Photo/National Park Service

I took a snow shuttle there (part of the beauty in visiting in winter), so there was no vehicle to save me. If I insisted on continuing on the trail, my only other option if it charged would have been jumping into the icy cold Firehole River on long skis. I made the wise move and changed course to Lone Star Geyser from the Old Faithful Snow Lodge, my home base.

I was astounded by the solitude. Although the geyser erupted prior to my approach (it goes off every three hours), I stood in awe. The large mound resembled something out of “Close Encounters of the Third Kind.”

Yellowstone’s charm lies in its massive, scenic landscape and wildlife encounters – from the serene to the raw reality of nature. It’s accentuated in winter. That’s why the Park Service manages a fleet of snow coaches with top hatches to spring up for photo ops. The commuter van on treads appears like something out of the military, grinding through some of the most challenging terrain in the park.

It’s the vehicle of choice for visitors and wildlife enthusiasts entering the park from the town of West Yellowstone, deemed the snowmobile capital of the United States. I passed on a snowmobile rental given the sub-zero degree temperatures Yellowstone is known for. Park Service employees have a saying of Yellowstone’s seasons – winter, winter, winter, summer.

Regardless of the cold, I knew I was in for a special treat upon my first day. It’s not every day one can catch a wolf gnawing on a dead elk. But that’s the cycle of life at Yellowstone. Hours later, I came within 15 feet of an elk while I was on a quick, introductory 5-mile ski along a cluster of geysers from the lodge near Old Faithful. I suppose I was off in my own little world, but it was plain to see that I didn’t notice him until I was in his zone. The recommended distance from an elk is 25 feet. I veered way out, so I could keep an eye on the animal without getting any closer. I wouldn’t have witnessed a spontaneous eruption from a dormant geyser if I hadn’t taken the alternate route.

Author Thomas Wolfe once characterized the park as “the one place where miracles not only happen; they happen all the time.” I believe it.

Yellowstone is the oldest national park in the United States; established in 1872.

On Day 2 of my cross country ski adventure, I captured the grace and elegance of white trumpeter swans on Yellowstone Lake, just south of the Continental Divide. Rick, our guide, was full of stories. Some I didn’t want to hear. He drove the snowcoach 30 miles that day, so he had plenty of opportunities to share things like the claw marks of a grizzly bear on a tree next to the trail. I felt mortal at the thought of a possible encounter.

The falls in the West Thumb region plunge with such force they freeze on the back splash, much like Multnomah Falls on the Columbia River Gorge east of Portland – but to a larger scale. As for grand, there is such a thing in the Wyoming Park. The Grand Canyon of the Yellowstone, as they call it, provides spectacular views of a gash in the Earth 1,000 feet deep and 4,000 feet wide.

The feast for my eyes reminded me of another cross country vacation two years prior. 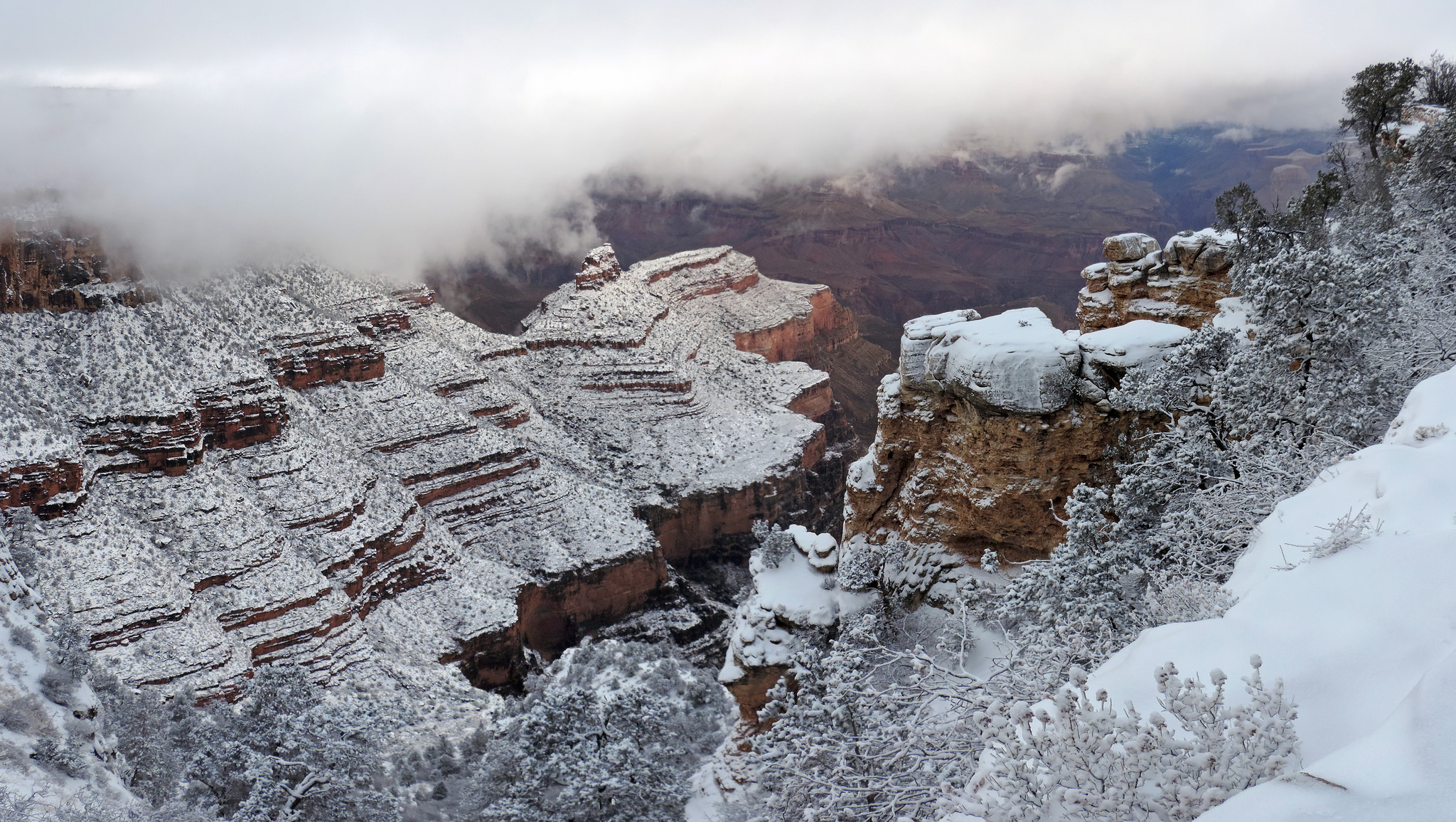 Crowds are not a problem during winter at the Grand Canyon. Photo/National Park Service

The other Grand Canyon experience

Arizona is known as a sweltering hot desert state. Many a movie scene and vacation photos have shown sunburns and shorts at the South Rim of one of the nation’s most popular national parks. It was established in 1919.

However, it’s a different world on the North Rim – and an even more unique one in winter. Amid the pinion pines and uncrowded terrain marks the Grand Canyon’s North Rim in the winter months. Like Yellowstone, visitors are brought in via snowcat to Kaibab Lodge, an old, rustic lodge complete with a large wood fireplace and the allure of musicians sitting around it. The cabins tucked in the woodsy setting of the Kaibab National Forest were even more rustic – like something out of a youth summer camp.

But what seemed like the minimalist approach in the sleeping quarters went rather upscale in the lodge’s “living room,” kitchen and trail provisions. The chef, who I heard honed his cooking skills in prison, but I didn’t care, whipped up quite a spread for the holidays that might almost rival one at the Ahwahnee Hotel (and I will still call it that).

I chose New Year’s to partake in this experience in 1995. Here I have the fondest memory of cross country skiing all day along the sweeping landscape of the North Kaibab Trail. No matter what side of the Canyon a visitor stands on, it’s difficult to get tired of the view – whether it’s from Cape Royal or Bright Angel Point. The snowcat took a group of us out to the rim where we skied the perimeter. From there, I opted to ski back and I’m glad for doing so. I got in a good 15 miles that day, burning off the calories from the best toasted peanut butter and honey sandwich I’ve ever had.

My timing on the long ski day was a bit tight. I crested the last ridge back to the lodge as I contemplated pulling out my head lamp when much to my delight my eyes rewarded me immensely. There the lodge stood in the distance, lit up with Christmas lights like part of a Thomas Kincaid painting. It was heart and body warming to see. 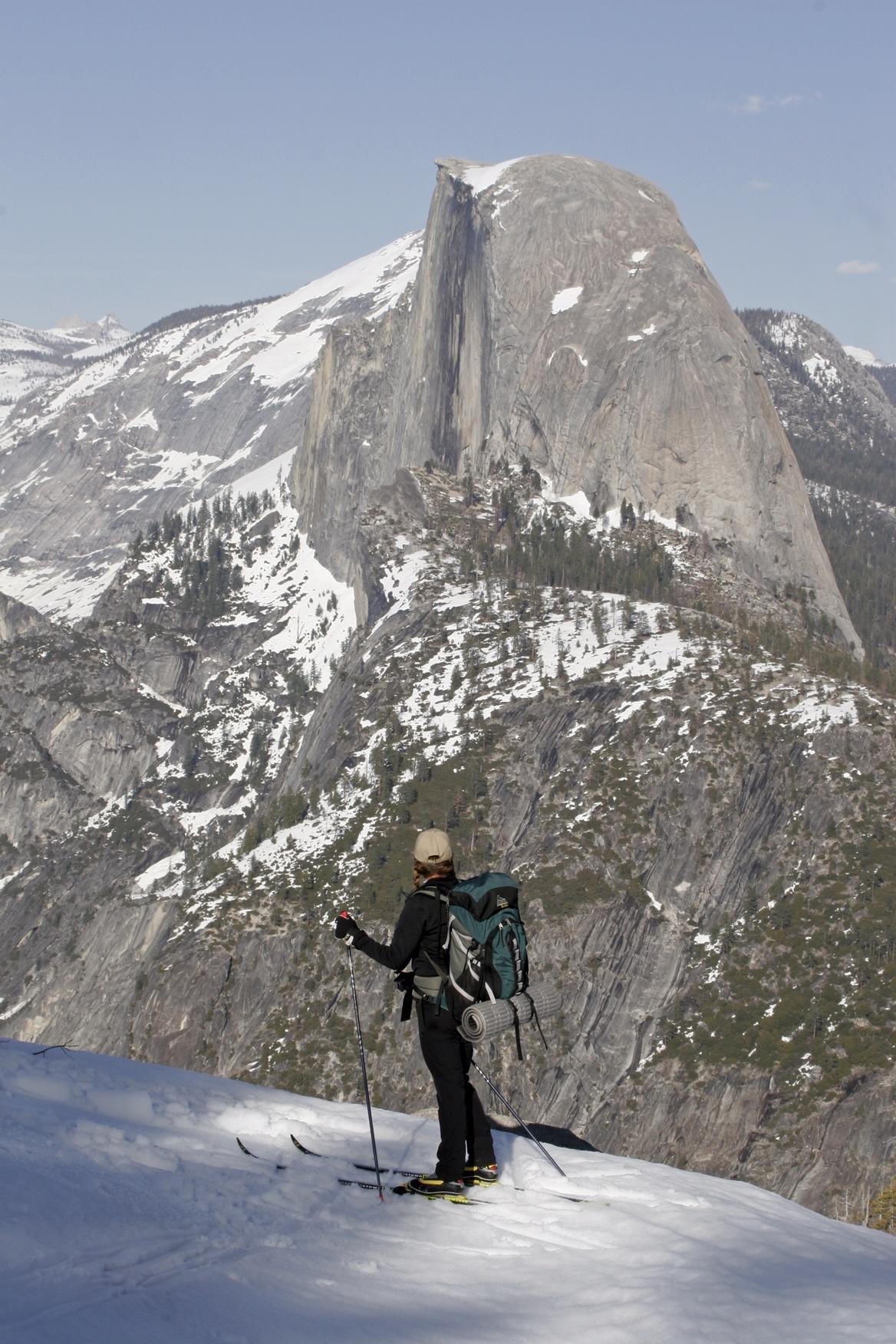 Views of Half Dome and other iconic Yosemite landmarks are even more delightful in the snow. Photo/National Park Service

The Trans-Sierra trip of a lifetime

To backpack and snowcamp Yosemite is to follow in the footsteps of such a notable pioneer as John Muir, but with a few more provisions than a loaf of bread and cup for water. Muir, the iconic Sierra Nevada ecologist before there was such a thing, never grew weary of the granite-dominated, glacier formed national park established in 1890.

On this Sierra Club guided trip set in mid-April 1996 over my birthday, 12 days before Earth Day and Muir’s birthday I knew why Muir had such feelings. I threw a 40-pound pack on my back filled with my life for four days and set out on cross country skis from Lee Vining on the east slope of Yosemite while following Tioga Pass Road most of the way.

The first night was a treat. As an introduction to the wilderness, we stayed in the comfort of cabin quarters at Tioga Lodge. The staff even baked a cake for me. Given the preservative-laced stir-up meals on the agenda for the next two nights, I devoured that cake and the entree.

Snowcamping can be a test in patience and logistics.

It takes good prior planning and a Plan B for the unexpected. When your skis decide to stick to the snow because the terrain and temperature changes, it’s good to have wax. When you need to climb on crusty slopes, you’d better untangle your skins (a course layer applied to the bottoms of backcountry skis for gripping). When your metal tent anchors freeze deep in the snow overnight, you’d better learn to use long string as a simple trick. And the list goes on and on.

What tries you, though, rewards you with some of the most stunning views of this magnificent spectacle of a national park.

I had a precursor to magnificent views in skiing out and camping at Glacier Point in winter from Badger Pass on another trip and that was enough for me to feel the allure. Try a 180-degree view of Yosemite Valley with Half Dome dead ahead as the sun dipped below the horizon and cast ever-changing shadows on the famous rock monolith.

This Trans Sierra trip provided the type of untouched scenic beauty so pure it can take your breath away — coupled with midday sunny spring skiing conditions where sunscreen rules.

Rewards abound with the appreciation of the simple pleasures. Take the beautiful virgin snow collar that rims a river and its rocks. Take the unbelievable, rarely-seen back side of Half Dome as you descend from the northeast into Yosemite Valley. Take the classic looks on visitors’ faces when you walk with full ski gear into the Village without a snow patch to be found. Take the never-take-it-for-granted reward of getting the largest cheeseburger on the menu with French fries and a milkshake at the café because you probably lost 20 pounds reducing your food intake and burning it all off on that day. Take the end of the white-knuckled shuttle plane trip back to Lee Vining in which your seat involves a backpack and you scoff at the pilot handing you a seatbelt.

Then, take the thought of having a real bed for the first time in four days.

Now that my friend is living – living the Sierra Nevada in a winter dream.