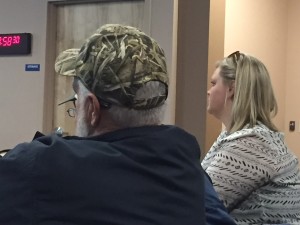 Danny and Jenn Lukins of Lukins Brothers Water Co. listen to water officials talk about PCE in the groundwater near the Y in South Lake Tahoe. Photo/LTN

Two underground plumes of a highly toxic chemical are inching their way toward Lake Tahoe. Even though tetrachloroethylene, or PCE, was first detected in South Lake Tahoe near the Y in 1989, the source of these plumes remains a mystery.

To no avail Lahontan Regional Water Quality Control Board through a $69,000 grant from the state tried to find the source. The results were released last week at a meeting hosted by Lahontan.

The area that was tested was between Patricia Lane on the north, Fifth Street on the east, Roger Avenue on the south and 11th Street on the west. This area was chosen because it is adjacent to the affected wells. The PCE was found in the Lukins’ wells in 2014.

“There is no connection between the two plumes. This tells us the source of the PCE is farther up gradient,” said Chani Hutto, with URS, the company that did the testing. “PCE could still be in the site boundary, but deeper.”

Lahontan plans to drill deeper the next go round. Last year the 22 borings went down between 22 and 40 feet.

“No new sources of contamination were determined. That is why we are going to go deeper,” Jenn Lukins, who runs Lukins Brothers Water Co., told Lake Tahoe News.

If the source is located, the responsible party will be liable for paying for the cleanup.

“This is a communitywide issue,” Lukins said. “The next step is to plan for remediation. We need to remediate the plume out of the aquifer.”

Lukins has had to shut two of its wells down because of the contamination. In the meantime, South Tahoe Public Utility District is supplying the private company with water to make up for what it can’t produce on its own.

A Tahoe Keys well is also affected by PCE.

Lukins and the Keys water systems are building filtration units to treat their water so the inactive wells can be put back into service. Lukins hopes to put in two 3,000-foot long granulated carbon filters this year. The proposal is before the California Public Utilities Commission.

Who will pay for this remains to be seen – local ratepayers or everyone via a state grant.

California in 2008 banned new PCE machines. And all such machines are to be out of commission by 2023. However, PCE will still be able to be used.

PCE was a commonly used chemical in dry cleaning and automotive businesses. Lake Tahoe Laundry Works used to be at Y in the Raley’s center. That is a known source for PCE contamination right there and had originally been thought to be the source of the plumes below TJ Maxx and Classic Cue. In 2010 company officials said it could clean up the groundwater in four years and then monitor the situation for one. That did not happen. And while there is improvement at that site, PCE is still detected there.

A draft remediation plan is out on the street for comment, with the deadline to do so being Feb. 11. The plan is expected to be adopted in April. An advisory team at Lahontan will decide what the next steps are for the former laundry facility.

Previous post : Opinion: California needs to embrace the apocalypse Next_post : Talk centers on plants that may lead to cures