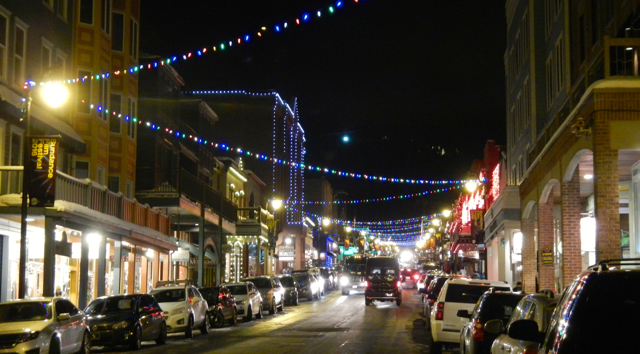 It’s easy to walk up and down Main Street in Park City. Photos/Kathryn Reed

For years people have been saying Lake Tahoe – the South Shore in particular – is at a crossroads, at a tipping point. Many have predicted this region’s demise if change did not come – and come dramatically and quickly.

And, yet, here we are, still plugging along as the wheels of change turn slowly.

In many ways Mother Nature is as big a player in our future as anything we mortals might do.

Hotels are full this winter because there is plenty of snow to ski on. That is the key difference between today and a year ago today. 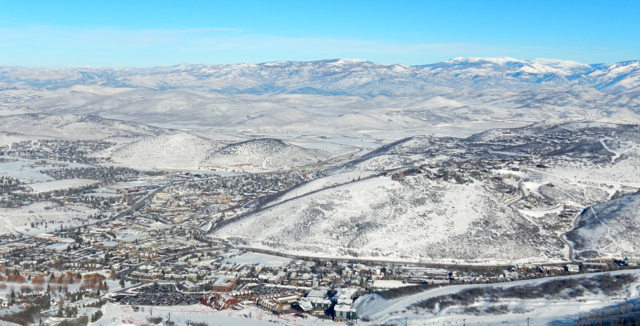 Park City’s sprawl is evident from the slopes.

But what is different this season compared to winter’s past is more people are coming on the weekends and fewer are here midweek. The traffic boondoggle last weekend involving people heading west on Highway 50 having to sit for hours just in the basin, let alone being able to inch their way over Echo Summit, is testament to an increase in vehicles on the roads. They all leave at the same time, but don’t all arrive at the same time – thus the reason there is chaos only upon departure.

We are not alone in having to balance the needs of locals and visitors. Congestion isn’t unique to Tahoe. But that doesn’t mean we should not be striving to find palatable solutions.

Some people are satisfied with the status quo. That’s too bad. I think we can do better – throughout the basin, but especially on the South Shore. 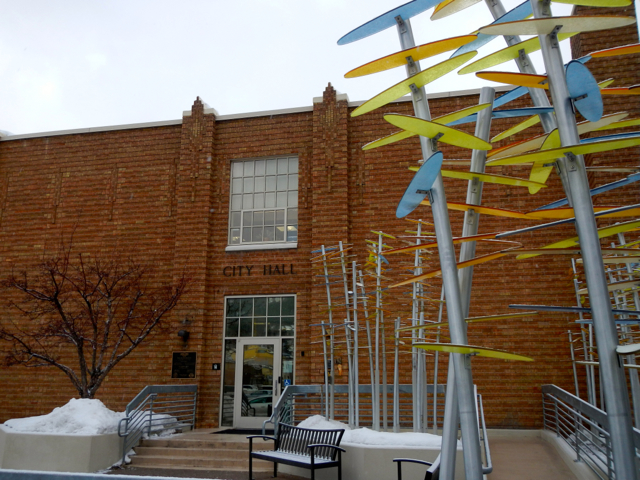 Park City understands the importance of having a true city hall as well as public art.

We can build pretty commercial structures, reroute highways and create environmental improvements to keep the lake clear. But can we provide jobs that pay enough for people to continue to live in the Lake Tahoe Basin and not have to drive over a mountain pass to get here? Can we give visitors an experience that has them immediately making their friends jealous with photos and descriptions on social media?

I’m fortunate that I get to live and work in the same town. I don’t commute. Sure, there are meetings and events to attend elsewhere, but that is the norm for most jobs, especially being a journalist.

People talk about affordable housing. I believe that is the wrong discussion. The topics should be jobs that pay enough to live here and employers paying a livable wage. The two are different issues.

Talking with people in Park City, Utah, last month it was hard to find anyone who lives in the city limits. They commute from 30 to 60 minutes away. Many don’t even come into town to shop or eat. It would be sad if Tahoe ever became like that. 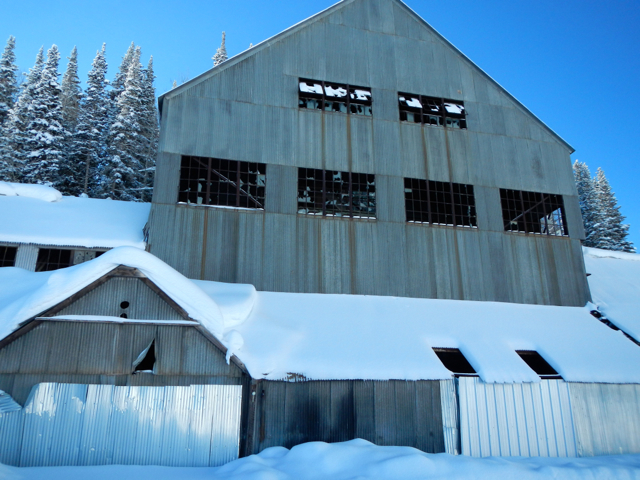 Park City embraces its mining past, including a tour on the mountain about its history.

·      What percentage of Park City workers lives in town?

Park City has a cute, walkable downtown. There is a mix of shops and restaurants. Then there is sprawl. But it’s a much smaller town than South Lake Tahoe, let alone comparing it to the entire basin.

South Lake Tahoe will never truly be walkable – sections, yes, but never the entire city. Tahoe City, Kings Beach and Truckee are more do-able sans vehicle. That is why it’s imperative the South Shore create districts. Creative names – maybe something other than a street (think Ski Run and Harrison) – would be a start to getting people to gravitate to those areas. Obviously they need a mix of interesting things to attract people – a name alone won’t do it. Think about the Gaslamp District in San Diego or Rockridge in Oakland or Noe Valley in San Francisco. The changes South Lake Tahoe wants to make at the Y – and making a concerted effort to call it Tahoe Valley – gives me hope we are on the right path. And it’s even better that it is on the other side of town from where for many years the focus of progress has been concentrated.

No need for money when riding the bus in Park City.

A great thing about Park City is the free bus service. The city operates the bus system, with Summit County contracting with Park City to operate the county portion of the bus service.

Park City voters have agreed to tax themselves in other ways as well.

“Lift ticket sales are considered taxable in Utah and fall under the state’s sales and use tax laws,” Rockwood explained. “Therefore, lift ticks are taxed at the sales tax rate in the sales district which they are located.”

Clearly, it takes taxes on what locals and visitors use to be able to provide certain amenities in Park City. Tahoe residents need to decide what they want and then how to pay for it. I’m all for user fees, that’s why I liked the paid parking concept. Only people parking there paid for it. I want a decent return on investment for whatever I’m paying, for the money to go for something tangible and for it not to go to any entity’s general fund. And it’s time to stop, at least for a few years, initiatives that raise property taxes.

Douglas County commissioners in December passed a gas tax that will in part fund improvements related to the loop road if that project goes forward. South Lake Tahoe is contemplating multiple taxes – hotel, sales, amusement – that could be put before voters in November. Recreation and roads are two of the likely beneficiaries of those dollars. 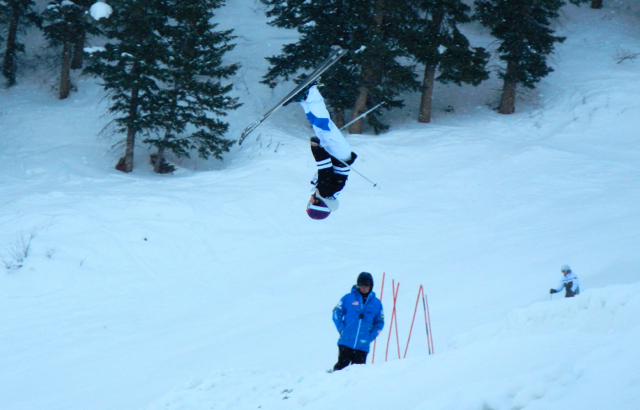 The U.S. Ski Team practices at Deer Valley in advance of this weekend’s freestyle competition.

Park City is also able to draw a large number of people through events. Tahoe knows this is also a way to drive heads into beds, but doesn’t capitalize on this in the winter in a significant way. Park City has global events in the winter. The biggest stop on the World Cup tour, the Visa Freestyle International was at Deer Valley for the last three days and the U.S. Grand Prix was at Park City ski resort. Utah will host the 2019 World Championships in freestyle, freeskiing and snowboarding, which are expected to bring more than 500 athletes from more than 50 nations to Park City and Deer Valley ski resorts. The Sundance Film Festival is an 11-day event that takes over Park City in late January.

Of course Park City was also darn near a co-host city in 2002 for the Salt Lake City Olympics. That is something people need to remember when comparing Park City to Lake Tahoe. Yes, Squaw Valley had the Games in 1960, but that was such a different time. Park City was able to benefit from an infusion of federal and international dollars to improve infrastructure that to this day is paying dividends.

It’s unfortunate the ski cross and snowboardcross World Cup events set for Squaw Valley last March had to be canceled because of lack of snow. Hopefully, the powers that be will recognize Tahoe is World Cup worthy again. Heavenly’s run – World Cup – hasn’t had such an event in decades.

Another major difference between Park City and Tahoe is the quality of lodging. It runs the gamut there, with no visible evidence of one star or less hotels on any of the main roads. The Park City Marriott was equivalent to South Lake Tahoe’s Lake Tahoe Resort Hotel. It was nice to have a mountain feel walking in and a certain coziness not often associated with a Marriott property. The shuttle service at the hotel was excellent, as were other guest services.

Stein Erikson Lodge and Goldener Hirsch are high-end properties. The level of service at these two, which are right at Deer Valley, outshine anything in the Tahoe area, even the Lake Tahoe Ritz-Carlton. The Ritz and Resort at Squaw Creek are the two real high-end properties in the area and neither is actually in the Lake Tahoe Basin. Time will tell if the Lodge at Edgewood will live up to the hype of being the high-class lodging that has always been lacking on the South Shore.

What I was left with after a week in Park City was that it is friendlier than Tahoe. Guest service was off the charts no matter the caliber of restaurant, no matter where we were. It made me want to go back just for that vibe, that positive energy – and it felt authentic. If Tahoe were to emulate Park City at all, it should be to capture that attitude. Maybe from there we could solve some of our other issues.