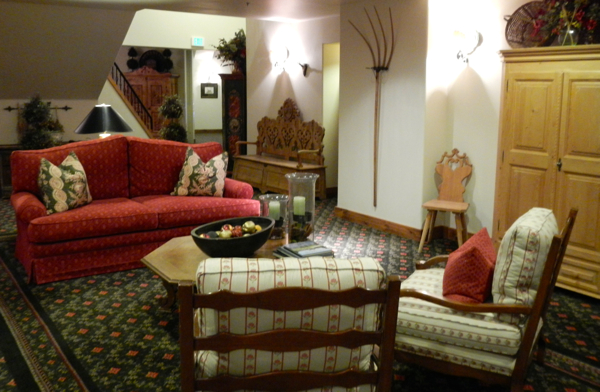 Goldener Hirsch has communal seating throughout the property. Photo/Kathryn Reed

PARK CITY – If a hotel property is only as good as its leadership, then Goldener Hirsch would medal in guest services.

But it’s also about teamwork at this hotel that is steps from Deer Valley, the ski area that has been rated No. 1 in the United States for multiple years.

There’s a distinct reason why this 20-room boutique hotel prides itself on attention to detail and being true to its heritage. It’s owned by a family with a background in the golden experience – the Eccles lineage, with Spencer as its patriarch, and daughter, Hope, as the president.

Spencer Fox Eccles, known as Spence to his employees, is a prominent financier and philanthropist in Salt Lake City. Beyond serving on several boards including the National Chamber of Commerce, Alta Ski Corporation, National Parks Foundation and the U.S. Ski and Snowboard Association, he was one of three people to steer the 2002 Salt Lake Olympic Organizing Committee. Because of his undaunted work, he was appointed as mayor of the Olympic Village during the Games and received the Pierre de Coubertin medal from the International Olympic Committee, the Olympic movement’s highest honor. 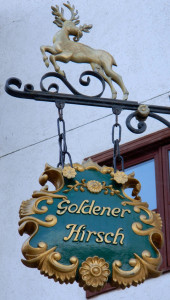 Goldener Hirsch is walking distance to the slopes at Deer Valley. Photo/Kathryn Reed

Just visit Utah Olympic Park’s swimming pool used by freestyle aerialists, and see whose name is mounted on a welcome sign. As a University of Utah student, Eccles earned all-American honors in 1957 and was regarded as one of the top amateur ski racers in the nation.

Guests to his hotel in Silver Lake Village, which is walking distance to Deer Valley’s slopes, will notice his stamp of excellence channeled through his employees and the establishment at every turn. Nothing but excellence will do. And Eccles takes striving for perfection to new levels, and meaningful accolades have rewarded him. The hotel gained recent recognition as the No. 2 small hotel in North America by Condé Nast Traveler magazine.

At first glance, the Austrian influence can be found on all floors of this hotel that opened in 1989. The imported, ornate décor is so tasteful and authentic, it feels like one just stepped into a “Sound of Music” production. This is not off base, according to regular Doug Whitney of Park City, who was enjoying the après ski experience at the bar one recent evening with his buddies and sister.

A yodeler used to visit the hotel to sing in the bar in Julie Andrews’s style. There are long alpenhorns on the wall in the bar and the lobby seating area. Upon seeing these unusual specimens, a few guests couldn’t resist chanting “Ricola” to signify the cough drop commercials. It’s a European feast for the eyes throughout the hotel, with sleds and antique bureaus sprinkling the floors, and antlers and horse harnesses dotting the walls. Even the heavy wooden room doors emulate a European castle experience, complete with an oversized key that guests leave at the front desk when they depart the building. 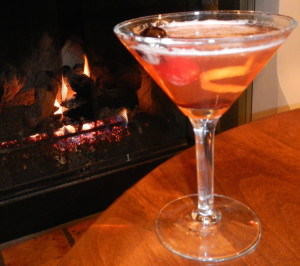 Cocktails and breakfast are served by a fireplace. Photo/Kathryn Reed

But first and foremost, it’s the atmosphere that makes this place on Royal Street special. It’s quiet, relaxed, yet amenity filled – with indoor and outdoor hot tubs, and among other things, a fine dining restaurant that even staffers in nearby retailer establishments recommend to their customers. Chef Ryan Burnham, who several years ago worked at Sunnyside in Tahoe City, makes meals to savor.

Dave, the concierge, serves as the consummate host. He and his fellow employees make the experience seem as though you were visiting long-lost European relatives. This guy could move mountains. As a Jersey boy, “fuggetaboutit” means he’ll take care of every whim. He’s quick to start a fire in a guest room or run an errand, even pick up dinner downtown.

And speaking of offerings, the hotel keeps its tradition of the finest in things from providing Aveda products in the bathrooms to better than average ingredients in the bar. Mimosas mentioned on the “specials” board are not made with the cheapest Champagne. They’re made with Gloria Ferrer brut. Come time for breakfast, the whole wheat pancakes are smothered with syrup from Vermont, the connoisseur’s home state of the sweet stuff.

Glance over as you sip your coffee or juice, and you’ll see your skis put out by the staff to beckon you to the slopes. At the end of the day, the turn down staff tucks you in with chocolate mints and a forecast from the National Weather Service. It’s hard to decide whether to stay in the hotel’s comfy seating areas for a game of Backgammon or go out to Deer Valley’s pristine slopes to let the two planks carve perfect turns. (Deer Valley doesn’t allow snowboarders.) 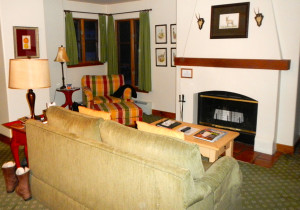 Rooms at Goldener Hirsch are spacious and comfortable. Photo/Kathryn Reed

“The spirit and camaraderie is authentic,” said Whitney, who’s frequented Goldener Hirsch since 1992. He even recalls a time when much of the staff spoke German. (Note: this Goldener Hirsch bears no ownership relation to the one in Salzburg, Austria.)

Still, American ingenuity and lifestyle provide flair to this European experience. Walk into the bar after a day of skiing, and you could hear jazz in the background. Jazz, drinks, good food and off-the-charts comfort – life is good at the Goldener Hirsch.