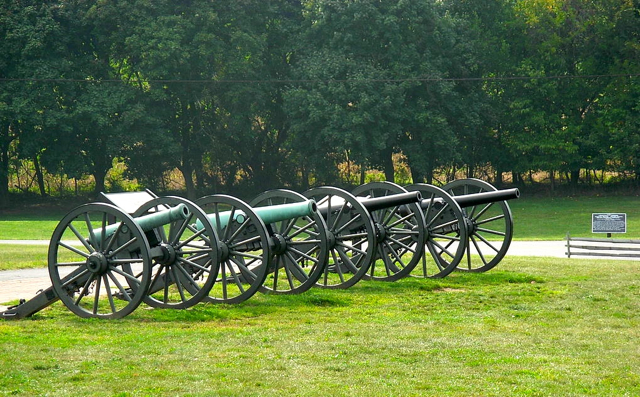 Little did I know on that pleasant and tranquil day in the fall of 2003 I was headed for a moving and intense experience—an event more weighty than I had bargained for. That was the day my friends and I visited Antietam National Battlefield, the site of the bloodiest single day of the Civil War—some say the bloodiest day in all of American history.

At that time in my life, I knew little about the Civil War, had only vaguely heard of this battlefield called Antietam and really didn’t think it made much of a difference in my life.

As my friend drove, I quickly scanned the brochures we received from the man at the entry, and making a decision to drive instead of walk the route because of a time constriction, we headed off, our real anticipation being the Appalachian Trail where we were to hook up with other friends for a few days of hiking.

However, the brochures (which I still have) were absorbing. We learned that Antietam, in Sharpsburg, Md., on bright and sunny Sept. 17, 1862—maybe somewhat like the day we were there—provided the setting for the destruction of nearly 25,000 souls—they were either killed, wounded, captured or simply ended up missing.

Mostly young men and maybe a few women, died on the slopes of Sharpsburg ridge, an area consisting then of mainly farms, fruit trees and bridges.

As we drove, our anticipation of the place heightened. Out our car windows, we marveled at the farm buildings, still there after all these years—oh, that these structures could talk, think of the story they would tell. Surprisingly, one of these buildings is still privately owned and occupied.

Imagine, living in a building that was privy to so much death. I’ve always wondered if this has an effect on the current residents of that building. As a journalist, I would very much like to interview them and ask if their day-to-day lives are in any way tinged by the killing and all the spilled blood. Blood that has since vanished, but nevertheless is still there somewhere, maybe in some way fertilizing the healthy trees that mark this battlefield today. 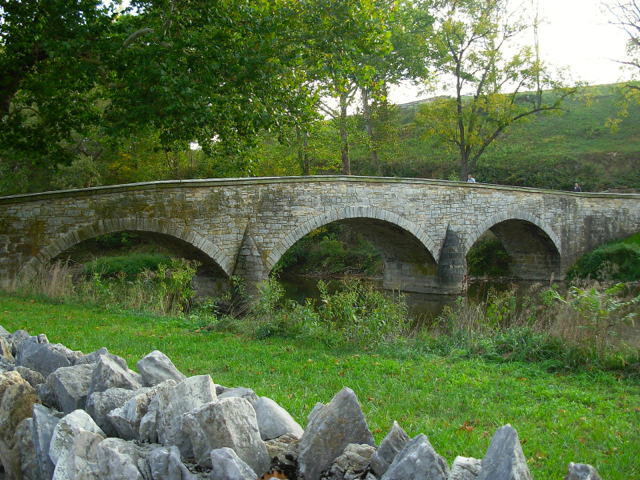 A review of the history of this battle states that Gen. Robert E. Lee’s Confederate forces stretched across the angle formed by the junction of the Potomac River and Antietam Creek. Gen. George McClellan, the Union leader, intended to attack both of the Confederate flanks and then assault the middle of Lee’s line.

According to the brochure, “There was no cohesion, no unified command, no definite objective, and at the climax of the battle Gen. George McClellan, leader of the Union forces, was unwilling to commit his reserves in the center. Antietam was in fact, a soldier’s battle, waged by separate units with little direction from above.”

History tells us that this gory battle was fought for nothing and it was determined to be a draw.

Forgetting for a while that the Appalachian Trail awaited, we pulled the car over to the side of the road and stood on a bridge crossing Antietam Creek, a beautiful and simple bridge that still stands just the way it did in 1862.

We walked up the dirt road away from the bridge called Bloody Lane. Viewing brochure pictures of all those people sprawled on the ground on Bloody Lane with their arms and legs akimbo, thoughts of death hit me like a hammer. Here we were, traipsing along in the warm sunshine, on sacred ground.

On this trip with my friends, my first since my husband died a few months earlier, death here and death at home seemed to be stalking.

It seemed unworldly that we could be walking along a road that was the scene of so much human destruction—and as a parallel to the thoughts Antietam evoked, it was amazing to me that I could be walking along this road without my husband of so many years. The poignant feelings evoked by this surreal event somehow served to bring to climax all of those despondent emotions I had about the passing of Tom. In some unimaginable way, they put it all into perspective in one simple moment of clarity.

This is why Antietam will forever be a place of beauty to me as well as a place of ultimate sadness.

I have the same feelings when I visit Valley Forge National Park. The feelings that are evoked thinking about all of those young, courageous and innocent people who fell for their cause, sometimes to no avail, are heartbreaking. 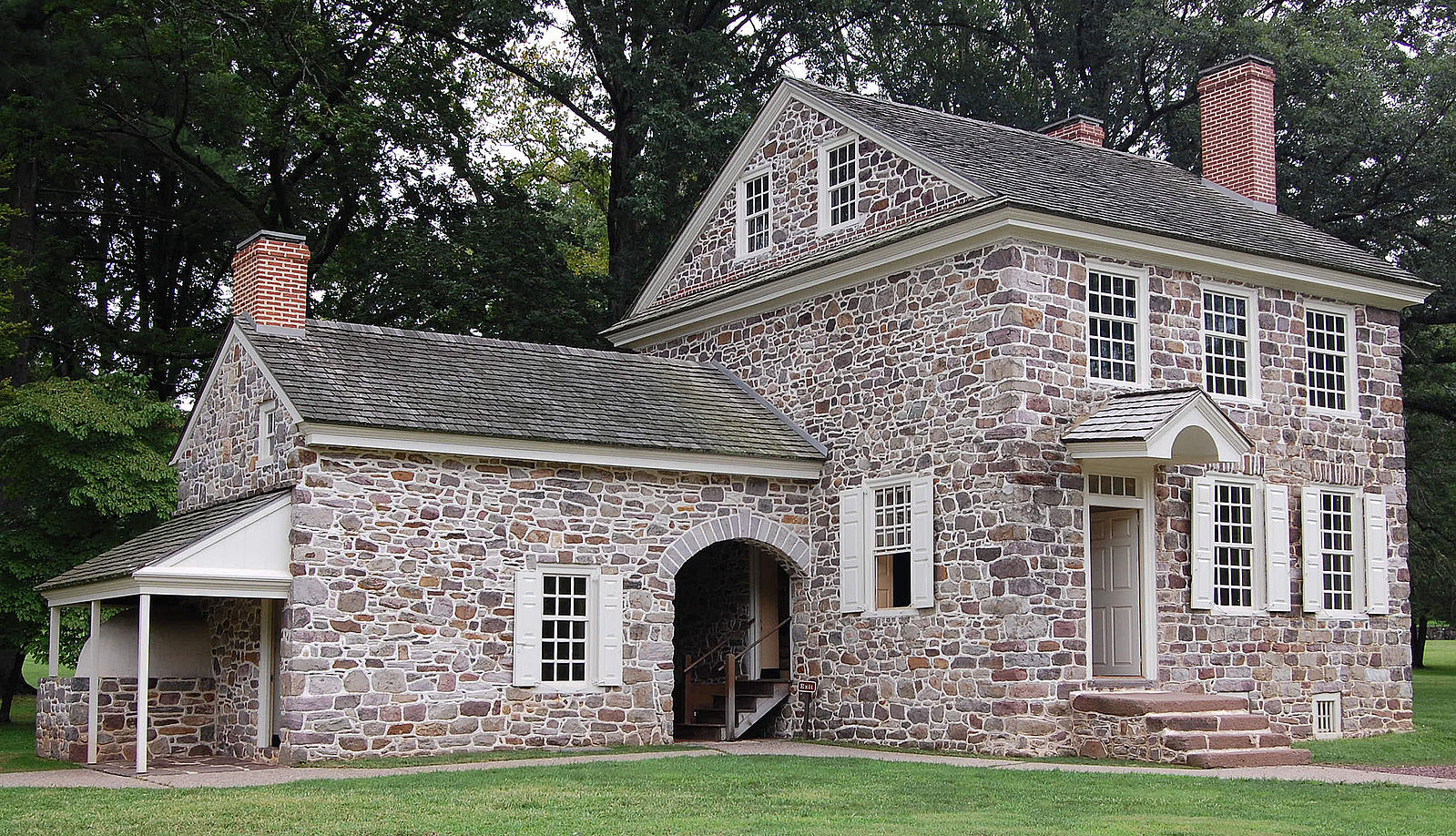 The headquarters of George Washington at the Valley Forge encampment. Photo/RevolutionaryPA.com

In summer, the rolling hills and lowlands of Valley Forge are grassy and beautiful, but on Dec. 19, 1777, when the Continental Army staggered in, weary from long marches, the prospect of wintering there was bleak.

Housing consisted of roughly built, drafty wooden huts—replicas of which are now strewn about the grounds, reconstructed as nearly as possible, on their original sites. The huts served as home to the troops as they froze and starved their way through that vicious winter, waiting for marching instructions from their commander, Gen. George Washington, although marching in the snow would be a difficult proposition as few of them had shoes.

Washington, however, did not live in the drafty huts with the men. His home, formerly the Isaac Potts house, still standing today, appears to be much more storm worthy and capable of warding off the cold. In fact, a recent tour of the Potts home indicates there were real beds, with perhaps down comforters for warmth, fireplaces and utilitarian but useful furniture.

Historians estimate that somewhere between 10,000 and 12,000 men bivouacked at Valley Forge a post about 20 miles from Philadelphia, with about 2,500 of them dying from disease and exposure, not once fighting a battle during that winter, except the battle for survival.

Fortunately, or unfortunately, depending on your outlook, with winter setting in, the prospect of confronting the enemy greatly diminished and never came to fruition. Washington’s army left Valley Forge on June 19, 1778.

Just as the battlefield at Antietam evokes wonder and heartache at the heroism people endure, display and confront during war, Valley Forge is a monument to the human condition, available in living color to anyone willing and able to make the trip to experience it.

I think it takes visits like these, to our national parks and other sites of extreme and natural beauty (although some are not beautiful, but just as interesting), to add the grounding so necessary to living our everyday lives. I think we all come away better people for allowing ourselves to be drawn into the history of what these places preserve.

I recommend you immerse yourself in as many of the national parks, national monuments, wilderness areas, ghost towns—anywhere you can experience our past, unfettered by the bounds of everyday life. They’re available and some are not too far home; you owe it to yourself.