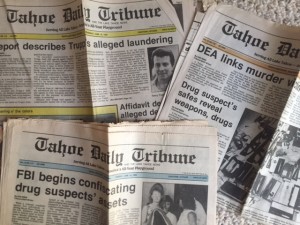 Tahoe Daily Tribune headlines in June 1989 were all about Operation Deep Snow. Photo/LTN

June 11, 1989, started out like any other Sunday in the basin – sunny, blue sky, uneventful. Before it was over South Lake Tahoe was making headlines internationally.

Mayor Terry Trupp, 46, his 24-year-old wife Kim (who at one time was his foster daughter), and 17 others were arrested that weekend on a slew of drug and money laundering charges. Many were South Shore residents. Even more were arrested down the road as the case unfolded.

The display of weaponry, cash and drugs at the South Lake Tahoe police station was impressive.

Stacks of one-hundred and thousand dollar bills were confiscated. Automobiles, motorcycles, jewelry, bank accounts, real estate, and gun cases – all seized – all believed to have been obtained by drug money.

It was retired El Dorado County sheriff’s Lt. Pete Van Arnum who put the handcuffs on Trupp. (He was working for South Lake Tahoe Police Department at the time.) Both Trupps were arrested at Lake Tahoe Airport where they had gone to pick up friends.

This is one of the biggest stories to happen in South Lake Tahoe in the last 50 years and is certainly the largest criminal act involving a member of the City Council.

Trupp was first elected in 1978 after serving several years as executive officer of the Council for Logic. That was the group opposed to the formation of the Tahoe Regional Planning Agency. He was re-elected in 1982 and 1986. In 1984, he made an unsuccessful run for the El Dorado County Board of Supervisors.

His last day as a member of the council was July 31, 1989. He had submitted his letter of resignation earlier in the month, on the same day his one-year stint as mayor ended. This negated the recall drive that had been initiated.

Trupp initially faced 21 counts, including allegations of laundering $845,000 in drug profits and bringing in 220 pounds of cocaine to Tahoe. He was looking at spending the rest of his life in prison if convicted. 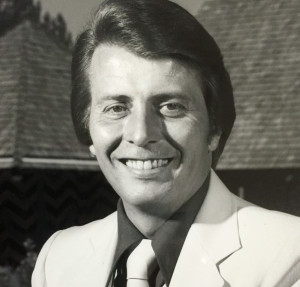 In August 1990 he pleaded guilty to two counts – conspiracy to launder money and unlawful use of communications for drug deals. On Oct. 11, 1990, he was sentenced to nine years in federal prison.

An Associated Press story at the time said, “(Trupp) said he pleaded guilty because he could not prove it was the fear of death and not the money that motivated him. Trupp read a long, involved statement accusing federal agents of using patriotism, fear, death threats and sympathy for persecuted Jews in coercing him to sell cocaine and launder drug money in the Lake Tahoe resort.”

Trupp was released before he served his full sentence. He later remarried and worked in sales.

Kim Trupp pleaded guilty to money laundering, which earned her a 21-month prison sentence. She could have faced 10 years behind bars and a $500,000 fine. She was Terry Trupp’s fourth wife. Trupp and his third wife became foster parents to Kim Trupp when she was 14.

People in town often wondered where he got his money. While he lived in a modest ranch-style house on Glenwood Way, he did have a Maserati. He had a bit of a pompadour, wore flashy gold chains and unbuttoned shirts. The couple were members of the local Church of Latter-day Saints.

On his 1987 and 1988 financial disclosure forms Trupp reported no income. The 1989 form lists more than $10,000 coming from consulting work for Heavenly Valley Resort Hotel, now the Tahoe Seasons Resort.

He was pro development and one of the leaders of the initial redevelopment efforts in South Lake Tahoe. Much of his campaign money came from the Stateline casinos, some of which he was doing consulting work for while on the council.

The FBI-DEA investigation, which included U.S. Customs, U.S. Treasury and local law enforcement, was known as Operation Deep Snow. The name for the 20-month investigation came from all the cocaine that was exchanging hands.