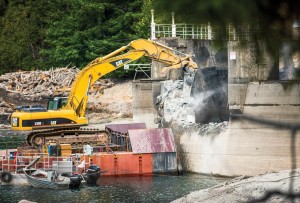 A barge-mounted excavator hammers away at Glines Canyon Dam in Washington, the largest dam removal in U.S. history. Photo/Ben Knight

MINDEN — Dams and other surface storage are “dinosaurs.”

That’s according to Daniel P. Beard, the former commissioner of the U.S. Bureau of Reclamation, the government agency responsible for building and maintaining 475 dams across the country.

Beard spoke before and after a showing of the 90-minute documentary “Dam Nation” at the CVIC Hall here Oct. 21, hosted by University of Nevada Cooperative Extension and GreenACTnv, a local nonprofit promoting sustainable energy. 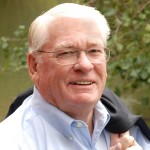 “They are the least effective way to deal with today’s problems,” according to Beard. “What we need to do is stop wasting water and promote water conservation and reuse. It is the cheapest, easiest solution to our water problem.”

“California conservation has demonstrated there is tremendous slack in the system,” Beard said.

He said we need to rethink the way water is priced in order to encourage conservation.

“We don’t hesitate to spend $3 for a half liter of water at the airport, yet somehow in our homes we expect we should get a lot of water and it should be cheap,” he said.

Beard also cited Australia where a 12-year drought forced the country to change its water law.

“Our water laws are irrational, first in time and use it or lose,” said Beard.

He said as a result water authorities such as the Southern Nevada Water Authority “circumvent” the law and buy up ranches and farms for the water rights.

SNWA spent $79 million to buy seven ranches in Southern Nevada a decade ago with the eventual goal of using the ranches’ groundwater to serve Las Vegas. The water authority grazes 11,000 sheep and cattle on the 960,000 acres.

Beard said he laughed when he read that the Nevada Legislature in the 2015 session could not pass a bill requiring vested water rights holders to prove their claims in an effort to inventory the state’s water supply.

The Glen Canyon Dam was built by USBR in the 1960s on the Colorado River in northern Arizona to provide water to the growing southwest. The dam filled the canyon to create Lake Powell and has been widely opposed ever since.

Beard said about 1,100 of the nation’s dams have been removed, mostly smaller ones. Larger dams cost millions to dismantle, such as Elwha Dam in Washington, the demolition of which is featured in the dam documentary.

Beard was the keynote speaker earlier Wednesday at a meeting of the Carson River Coalition in Carson City.