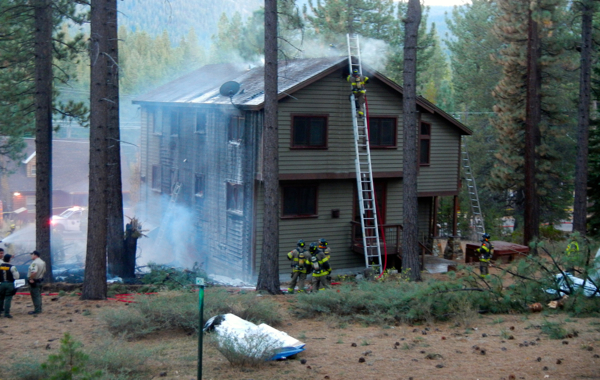 Firefighters work to contain a fire that was started Oct. 10 when a plane crashed in El Dorado County. Debris from the plane is in the foreground and to the right. Photos/Kathryn Reed

Two people died Saturday night when the plane they were in crashed just after takeoff from Lake Tahoe Airport.

The names of the people and their hometowns are unknown.

El Dorado County sheriff’s Sgt. Paul Hadjes told Lake Tahoe News the plane had landed at the South Lake Tahoe airport, waited a bit and then took off. The crash occurred about 5:40pm.

The single-engine plane was a Bonanza 35 with a V tail. The tail number was too charred to completely read.

Airport officials on Oct. 10 had yet to listen to recordings of the take off or any chatter after the plane was in the air to ascertain if the pilot radioed any trouble. The airport does not have a tower.

National Transportation Safety Board and Federal Aviation Administration officials will be on scene Sunday. People will be guarding the site all night. 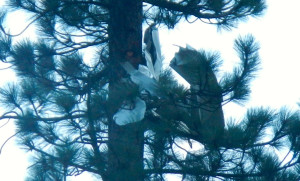 Pieces of the plane are lodged in a tree.

Trees sheered off by the plane are visible behind the house that was hit on Tionontati Street on the outskirts of South Lake Tahoe. This is due east of the airport.

One woman said this is not the typical flight pattern planes use to take off from the South Lake Tahoe airport.

While it was windy for much of the day, by dusk it had calmed down. The sky was clear.

The bulk of the debris from the plane was to the right of the house. This is what caught fire. The cockpit was not recognizable.

Other pieces of the plane were in the backyard and some was still high in a tree well above the two-story house.

Roommates Bryce Tye and Matthew O’Hara were on top of Echo Summit when they saw the explosion that cast a large plume of white smoke that was followed by black smoke. They raced home thinking it was their house that was hit, but it wasn’t.

One neighbor said the lot is cursed because this is the second time in 10 years a house there has burned.

The two people in the vacation rental escaped with their dog unharmed.

“The guy was sitting in the living room having a glass of wine when they hear what they think is a tree falling. They see fire and thought it hit an electrical line. They look out and saw it was an airplane,” Ginger Nicolay-Davis told Lake Tahoe News. She manages the property for the owners who live in Hollister.

The renter was one of the playwrights who was to perform Oct. 10 at Valhalla as part of the WordWave literary festival. He left the house without shoes and didn’t make it to the performance.

The extent of damage to the house is unknown at this time.