With the frightening potential of a massive earthquake and tsunami striking the Pacific Northwest under increasing discussion, scientists are also focusing attention on possible connections between that area and dangerous faults at Lake Tahoe. 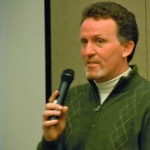 There, like along the coastlines of Washington, Oregon and Northern California, a big quake could someday trigger a deadly tsunami, with some preliminary research suggesting seismic connections between the areas.

“If everything in this region is synchronized, all of a sudden there could be a domino effect” after a big quake in the northwest, said Graham Kent, director of the Nevada Seismological Laboratory at UNR.

“We know these things have a long arm,” Kent said.

Previous post : Fall doesn’t mean gardening is over for the year Next_post : Drought along the Pacific Crest Trail