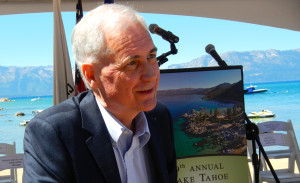 A challenge from hard-line conservatives in the House Republican caucus has Speaker John A. Boehner, R-Ohio, wondering how he might pass a bill to fund the government ahead of the Sept. 30 deadline.

But one of those conservatives said Wednesday that he’s had enough of the shutdown talk and resigned his membership in a prominent hard-liner group, calling their tactics “counterproductive.”

Rep. Tom McClintock, R-Granite Bay, told the leader of the House Freedom Caucus, which formed in January as a home for about three dozen of the most conservative Republican members, that he had “fervently hoped that it would provide responsible and effective leadership to advance conservative principles in the House of Representatives.”

McClintock cited several points of frustration over instances where Freedom Caucus members broke with GOP leadership on tactics, if not ideology: a late February standoff over funding the Department of Homeland Security, May votes on advancing fast-track trade authority, and last week’s handling of a resolution disapproving of the nuclear deal with Iran.

Previous post : Opinion: This land is our land Next_post : Snippets about Lake Tahoe