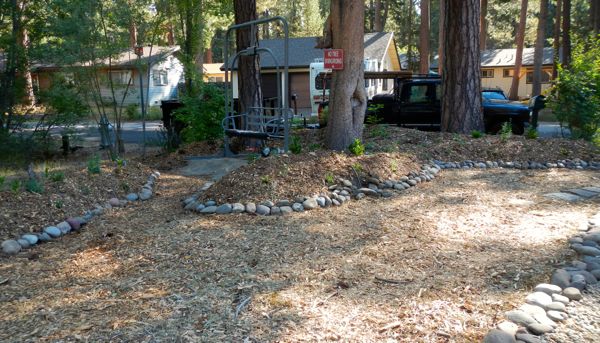 Publisher’s note: This is one in a random series of stories about what it’s like to go through the South Tahoe Public Utility District turf buyback program.

A spiral herb garden, raised mounds with endless plants and a dry riverbed. Those were not part of my plans when I decided to remove my turf. Those were Brian Hirdman’s ideas when he was hired to take over my landscaping project.

Hirdman’s passion, creativity and desire to reuse products attracted me to him. Plus, he shops locally. He had a vision that never would have crossed my mind no matter how many magazines I looked at or friends I spoke to. With his iPad he showed me other yards he had transformed. I was inspired knowing I could have something unique and well beyond my ability.

His brand of landscaping expanded my vocabulary to include permaculture and hugelkultur.

He was able to combine my need to use the yard for wood splitting, wanting relatively low maintenance and his sense of style. 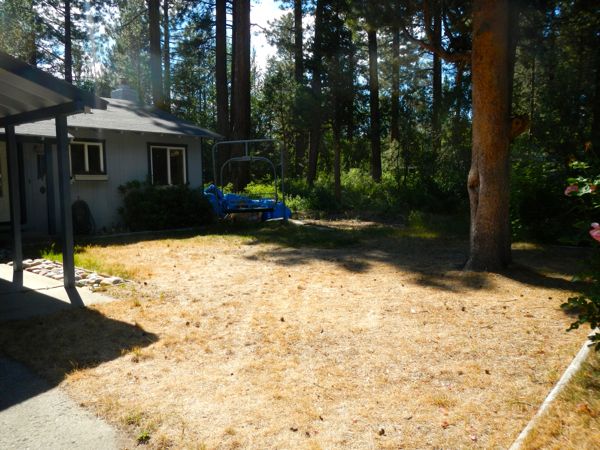 Dead grass has been replaced with the prowess of Brian Hirdman’s landscaping .

I knew I was in over my head I when rented the sod cutter last month and started to pick up the pieces. Dirt is heavy.

That aspect of the project alone could have taken me all summer to finish. And the grassy area was only 804 square feet.

I initially met Hirdman in May 2014 when he was putting in a garden at the Family Resource Center.  We reconnected when I ran into him last month at Ahern’s where we were both renting sod cutters.

Fortunately, he called that weekend. I turned the machinery over to Hirdman and his helper Garrett Murphy. With two cutters they had the yard sliced and diced in no time.

The two took the sod and made them into mounds, then covered it with newspaper, followed by horse poop and soil with some repeating – like making lasagna. No need for the black gardening cloth. The newspapers will breakdown. The horse poop from Camp Richardson stables is weed free based on what the animals are fed.

The beds will compact a bit, but for the most part will remain raised. 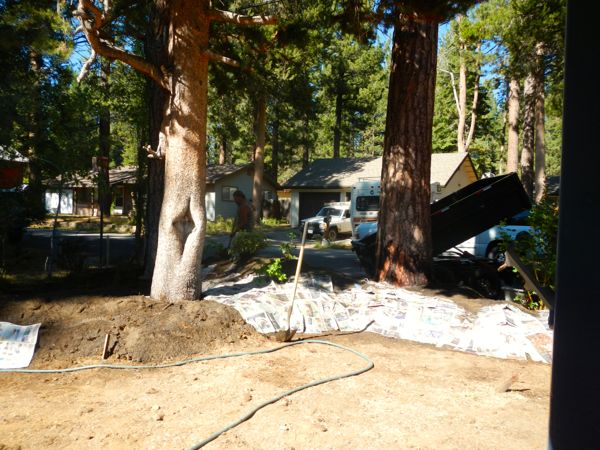 Newspapers, which will decompose, are part of the process to create the mounds.

Naturally, all of this comes with a price. Hirdman is adept at knowing what South Tahoe Public Utility District requires so I will get my rebate check. His base price is three times the square footage of the sod being removed. This includes removing the sod, planting the plants, irrigation, manure and wood chips.

Initially I had hoped to stay close to my rebate of $1,200. That was pre-Hirdman.

An unexpected infusion of cash into my bank account that had nothing to do with work didn’t stay there long. I wanted to do more than the basic turf removal. Hirdman became the financial beneficiary and I no longer have the worst front yard on the street. 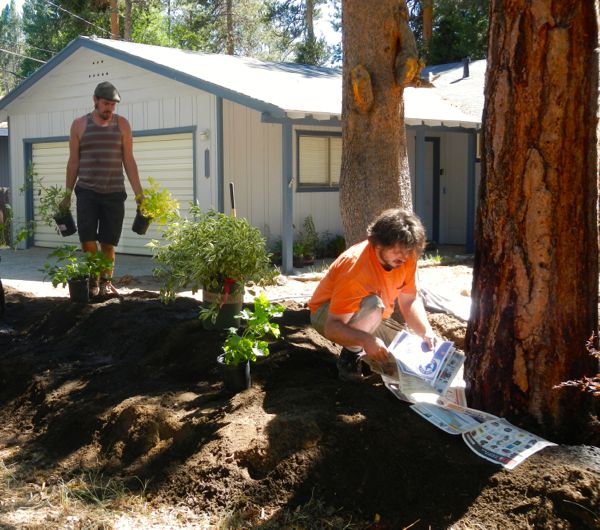 I love that everything in the spiral herb garden is edible or has medicinal purposes. It’s one of Hirdman’s signature designs – creating these out of rock from Tahoe Sand and Gravel. The choice of where plants go is based on the microclimates that are formed from the tiered garden.

This along with the dry riverbed that will catch the excess water from the rain barrel were extras.

Before hiring Hirdman I was most worried about figuring out the irrigation system. Based on the number of hours he was digging in the dirt to deal with a busted line and needing to adjust the pressure, I’m glad all but the extra parts were part of the bid price.

I also didn’t skimp on the number of plants. Oddly, today it looks like more could be planted because there is so much openness between greenery. In a year, though, the yard will look dramatically different, full of color, and taller foliage.

One of the mounds the guys created is designed to attract butterflies, insects and humming birds – my own little ecosystem that goes beyond the squirrels and bunnies (and occasional bear and coyote) that exist today.

Hirdman and Murphy also moved the chairlift swing, which in itself was monumental. I remember how hard it was to get it to where it had been. It’s now in a spot between two large pines that look out onto a California Tahoe Conservancy lot. The plants to the side and behind make a sanctuary of sorts, which in the coming years will be more pronounced as things grow. 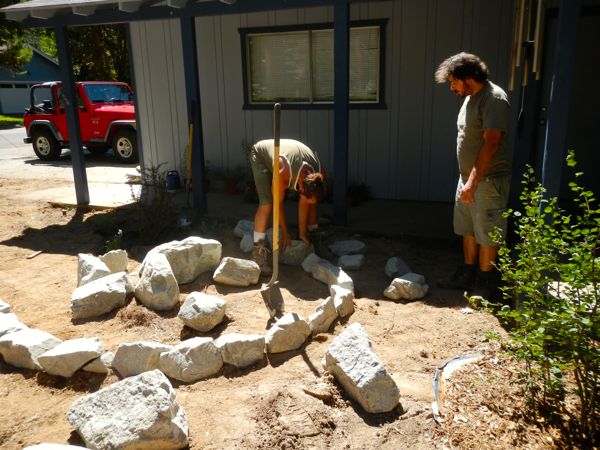 The whole yard is not completely done. I’ll be getting gutters this fall that will drain into a rain barrel that still needs to be purchased.

I have rounds picked out to create a bench, but still need to find a couple snowboards or some skis to turn that into a reality.

I’ll probably move more sand around from the badminton court to put under the swing.

Next spring I’ll bring the wine barrel from the back, which today has thriving tomato plants in it, and place it in a preselected spot. Most likely annuals will go in it.

Oh, and I need to get my South Tahoe PUD inspection so I can get my rebate.