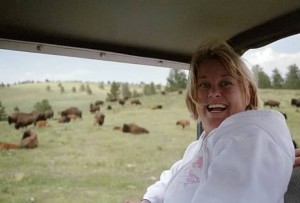 Officials at Yellowstone National Park are warning visitors not to fraternize with wildlife after a woman was injured while trying to take a selfie near a bison — but that hasn’t stopped some visitors from posting their close encounters on social media.

A notice released by the National Park Service on Wednesday detailed the episode, which began when a 43-year-old and her child turned their backs to a bison while trying to take a selfie. The animal was about six yards away. (It is illegal to be closer than 25 yards to the animals, park officials said.)

The visitors tried to get away when they heard the bison approach, but the animal lifted the woman up and tossed her with its head. She is the fifth person to be injured in an encounter with one of the park’s bison this summer.