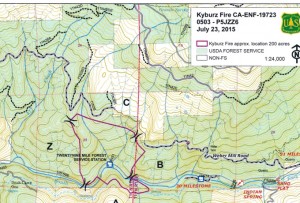 The fire area is outlined in red near the bottom of the map.

One lane of Highway 50 reopened Friday, with escorts alternating traffic in each direction. Motorists are being stopped in Meyers and Sly Park Road.

Mandatory evacuations have been lifted. A voluntary evacuation order is in place for Sand Flat campground east to Strawberry.

The fire is east of Whitehall on both sides of the American River.

About 90 percent of Kyburz Fire is on the north side of the river burning in steep slopes below Weber Mill Road. The west side of the fire has burned into light fuels from the 2013 Kyburz Fire. PG&E powerlines have been de-energized between Whitehall and Kyburz.

Boats have been cleared off of Ice House Reservoir because they are interfering with helicopter water bucket operations. Camping and shoreline use is still allowed.

Highway 50 may open to controlled traffic later today. For current road information, click on the state icon on the home page of Lake Tahoe News.

About 400 people are fighting the fire.

The Kyburz Fire burning in the American River canyon has charred 200 acres and is 30 percent contained.

Highway 50 remains closed because the fire is on both sides of the road. Traffic is being stopped at Meyers and Sly Park Road.

Crews have made the most progress on the north side of the fire. More dead fuel is on the south side, which is causing several spot fires.

A tract of summer cabins remains threatened. Evacuations are in place from Whitehall to Sand Flat Campground. Voluntary evacuations are from Sand Flat to Strawberry. The Pollock Pines Community Center is being used as an evacuation center.

The fire started about 2pm July 23, with reports of the cause being that a vehicle’s axle struck the pavement and sent out a spark.