Tahoe and tourists are almost synonymous. This isn’t anything new. It was even in the case in the 1920s, though at that time it was mostly the upper echelon of society who summered here.

To capture what life was like here in the 1920s, a group of history buffs started the Great Gatsby Festival in 1985 as a tribute to the South Shore’s heritage.

“The reason we started this festival 30 years ago is for living history,” Tallac Historic Site Director Jackie Dumin told Lake Tahoe News. “We wanted to have a living history festival here at the Tallac Site, which is a 1920s era site, and what makes you think of the roaring ’20s more than the Great Gatsby?” 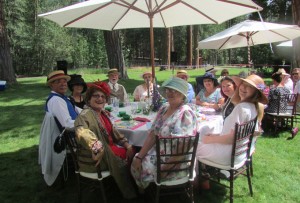 The tea is one of the highlights of the Great Gatsby Festival. Photo/Provided

Many of the buildings at the Tallac Historic Site were built in the 1920s. During this era, South Lake Tahoe was an elite vacation destination only available to those who came from privileged families, namely the Bay Area’s upper-crust society. In the 1920s roads had not yet been built around the lake and the only way to reach South Lake Tahoe was by boat. Those who could afford the expensive journey often stayed at the Tallac Historic Site buildings where they experienced pristine beaches and mountain serenity at these luxury estates.

“The Baldwin property was built in 1921 by Dextra, the daughter of the infamous South Lake Tahoe forefather Lucky’Baldwin, when she was only 19 years old,” Dumin said. “The Pope Estate next door was established in the 1920s, and the Heller family built Valhalla in 1923, so all of our buildings at Tallac Historic Site are 1920s era.”

Now celebrating its 30th year, the Gatsby festival is a longstanding Tahoe tradition that has become a highlight of the summer for many attendees and volunteers alike.

“The volunteer support is what has made this event so successful,” Dumin said. “It a lot of work, but it’s even more fun.”

Grab a feather boa and snap on those suspenders because the Great Gatsby Festival is free to attend. And people are encouraged to show up in period costume. The festival runs from 10am-5pm on Aug. 8 and 10am-4pm on Aug. 9.

For those who want to fully experience the lifestyle of the South Shore in the 1920s, a high-class tea party is at Valhalla on the Sunday afternoon of the festival. Guests are served tea and gourmet snacks on vintage China by “maids and butlers” in period costume. Afterward, there is a fashion show with this year’s theme being the “grit and glamour” of the 1930s.

“We have living history tours of the Pope House every 20 minutes,”  Tahoe Heritage Foundation Director of Operations Mikan Gosuico said. “We have volunteers in character and in costume so guests are able to go through the house and meet a lot of characters from the Pope family.”

Outside of the Pope House, a jazz band will play on the lawn where people are welcome to dance and enjoy a beverage from the nearby speakeasy.

“Well, we are in the 1920s of course when alcohol is illegal,” Dumin said. “And the speakeasy really provides that immersive historical experience.”

Silent, black and white movies will be shown in one of the cabins and lots of pre-World War II vintage cars will be placed for viewing around the property. There will also be vendors selling vintage clothing, and food and drink.

Don’t forget to bring the kids. Games and crafts that are 1920s era appropriate like a watermelon seed spitting contest are part of the festivities.

Besides the high tea on Sunday there will also be a silent auction throughout the weekend to help raise money for the Tallac Historic Site. Profits from the Great Gatsby Festival are used to benefit this historic area.

·       Parking is limited at the Tallac Historic Site. Parking is also available at the Taylor Creek Visitors Center, which is a 5-10 minute walk. Or park at the Y and take the Nifty 50 Trolley. Here is the trolley schedule.

·       For more information about the festival or to buy tea tickets, go online.